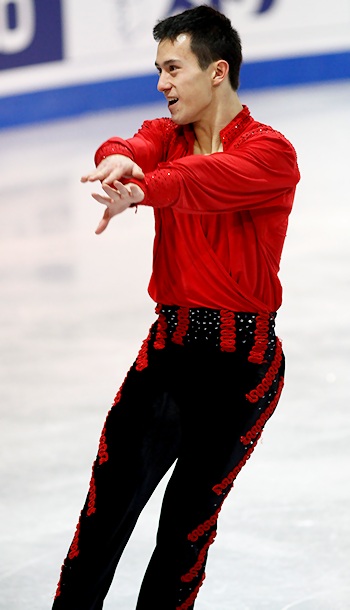 Canada’s Patrick Chan repeated as the Grand Prix Final Champion in an exciting Men’s event at the ISU Grand Prix of Figure Skating Final on Saturday.

Daisuke Takahashi of Japan rallied back from the short to take the silver, while newcomer Javier Fernandez of Spain confirmed his rise this season with the bronze medal.

Chan was a little off on his quad toes, stumbling on the first one and putting down his hands on the second one right out of the gate in his routine to Concerto de Aranjuez.

He recovered to nail a triple Axel and four more triples, as well as two level-four spins and level four footwork, however, he crashed on a triple Lutz towards the end. It was still a season’s best (173.67) for the reigning World Champion, and a total of 260.30 points to repeat as the Grand Prix Final Champion.

“The quads were really good this week, especially yesterday so it is kind of funny how they didn’t work today,” the 20-year-old said.

“It’s been a bit of a dream of mine to be able to repeat,” said Chan of winning the title. “I think it shows that the off ice training and the preparation has all been very positive. It’s a message to tell me that everything I’m doing is on the right track. I just hope to keep the momentum. It’s joy, the most joy I had in a long time. It’s finally a big event I was able to win in my home country.”

Takahashi, 25, had a shaky start into his expressive Blues for Klook when he tumbled out of his quad toe, although it was fully rotated. The 2010 World Champion put the mistake behind himself quickly and pulled off eight triples, including two triple Axels. The Japanese scored 172.63 points and accumulated 249.12 points overall.

“Yesterday’s result was pretty bad, and because I had nothing to loose, it helped me relax today,” the Olympic bronze medalist told the press. “The audience encouraged me to move better, so I am very satisfied with my performance today. It was my best performance of the season because I had good concentration after yesterday.”

Fernandez was solid on his quad toe and Salchow again, and was the only man to land two clean quads in the event. Skating to medley of Verdi operas, the Spaniard also hit five triples to make his country proud. He earned 166.29 points and made Spain proud with his bronze medal ( 247.55 points). He is the first Spanish skater ever to qualify for the ISU Grand Prix of Figure Skating Final, and has set himself up as a top contender for the European Figure Skating Championships next month.

“I did not feel pressure after the short program as I always try to focus on myself, to do my work as best as I can and to fight through each performance,” noted the 20-year-old. “The Final is just another competition, but the experience here helped me a lot to gain confidence in myself. I can do better and I can win if I work harder.”

Yuzuru Hanyu produced a nice quad toe, two triple Axels, and five other triples to finished fourth at 245.82 points. The two-time Japanese junior national champion only stumbled on the last jump, a Salchow, in his dynamic Romeo and Juliet program. At the end, he looked in disbelief at his coach, surprised at how well he had skated.

“I am very pleased that I could finish my first Grand Prix Final to my satisfaction,” said the the 17-year-old. “Not only did I succeed the quad toe loop, but I also landed all three combination jumps cleanly. I was very happy about that. I did a small mistake on the easier jump (Salchow) at the end of the program because of my lack of stamina and concentration.”

USA’s Jeremy Abbott finally put out the quad toe and also produced five clean triples, however, he crashed on the second triple Axel and on an underrotated triple Lutz. His exquisite program to Exogenesis Symphony Part 3 by Muse was still beautiful to watch. The two-time U.S. national champion dropped from second to fifth at 238.82 points.

Nevertheless, Abbott felt it was still the season’s best by far.

“I had two mistakes,” acknowledged the 26-year-old, “but I felt for the most part that I was focused through the majority of the program. I want each competition to get better and better. I did the quad here and I definitely gave a much better performance technically than I did in China or Russia. I got off the ice feeling much happier today than I did at either of those competitions.”

Michal Brezina came in sixth with 218.98 points. The Czech skater landed a quad Salchow (but touched down with his hand), as well as six triples (including an Axel), but he fell on the second triple Axel and singled a planned double Axel.

Like Abbott, Brezina made two mistakes, but he also felt it was his best free skate this season.

“I had a clean beginning, but then felt a little tired, so I did not jump up on my triple Axel,” the 21-year-old explained. “It was the first fall on a triple Axel in years, and it is a new experience for me. I want to re-watch the program and analyze why I fell in order not to do the same mistake again. I will need to improve the overall execution of my jumps.”