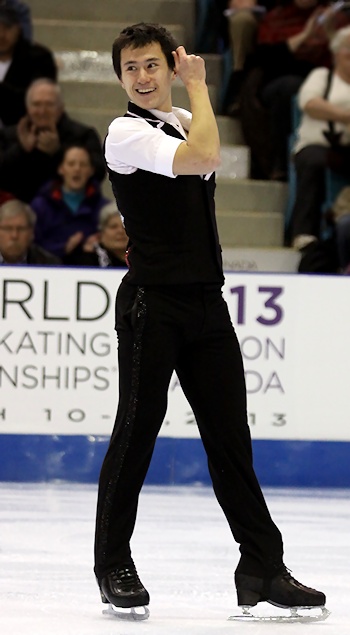 After being under fire all season for receiving high marks despite inconsistency, Chan reminded everyone in attendance that he is the reigning world champion. The 21-year-old earned a jaw-dropping mark of 101.33 with a flawless program in Moncton, N.B.

“It was kind of nerve-wracking since I hadn’t done a good short all season long,” admitted Chan. “Last year at Nationals, I did the exact same thing—put out a strong short program—and I had a great World Championships, so hopefully this is a sign that it’s on the right track.”

The defending champion seemed as though he could not put a foot wrong in his playful Take Five program. His opening quadruple toe loop was a little crooked in the air, but he landed it easily and stepped right into the triple toe loop for the second half of his combination.

From then on, the rest Chan’s program just oozed from his blades. His final element, a level four straightline step sequence, earned maximum points with every judge giving it a +3 Grade of Execution (GOE).

“Everything’s been so relaxed,” said the 21-year-old. “It’s like practice.”

The 20-point gap between Chan and second-ranked skater Reynolds reveals just how far ahead Chan is from the rest of the field, even on their best days.

Reynolds earned 80.31 points in his Chambermaid Swing short program with a clean and dynamic performance.

The 21-year-old landed similar jumps to Chan, including a quadruple Salchow-triple toe loop combination, but even with solid jumps, his effort was no match for the world champion. He earned level three on most of his non-jump elements, and only his first spin, a flying upright spin, earned level four.

“To get everything called as rotated here and to skate as well as I did, I couldn’t be happier right now,” Reynolds said.

After a disappointing end to his season last year—Reynolds went to the World Championships as an alternate, but finished 20th—he has high hopes for the free skate and what will happen beyond the Canadian Championships.

“Ice is slippery, but I would like to show that I am in control and that I deserve that second spot [to the World Championships],” Reynolds said.

Ten, who trains with Reynolds, is sitting third after the short program with a score of 70.81. The 22-year-old fell on his opening triple Axel, but rebounded immediately, getting right back into his Come Together short program.

Despite the mistake, the outing can be considered a victory for Ten, who missed about a year of competition due to injuries. He completed a triple Lutz-triple toe loop combination, a triple loop, and one level four spin. Two of his spins and his step sequence were called as level three elements.

Elladj Baldé (QC) turned out of the landing on his triple Axel and received an edge call for his triple flip, but the errors were not terribly costly and he is in fourth place with 68.32 points. The 21-year-old also struggled with his first spin, earning only level one for that element.

Once the jumps were complete, Baldé’s charismatic presentation kicked in, and the crowd loved the flair that he gave his footwork sequences, although the panel only found it worth a level two. With an entertaining free skate to Michael Jackson selections planned, he has set himself up to the fight for the bronze medal for the free skate.

With 66.34 points, Liam Firus (BC/YT) could also be in that fight. Since the 2010 Canadian junior champion does not yet a triple Axel, the short program is more challenging for him to stay competitive with the top senior men. In the free skate, 19-year-old could make up some points if he skates cleanly.