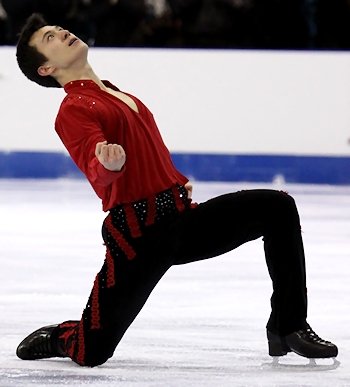 Patrick Chan (CO) broke into the “300 club” with his free skate at the 2012 Canadian Figure Skating Championships.

It comes as no surprise that Patrick Chan (CO) won his fifth consecutive national title at the 2012 Canadian Figure Skating Championships. The surprise was his score—before Patrick Chan skated on Sunday afternoon in Moncton, N.B., who knew that 300 points was a possibility?

Chan’s score of 302.14 was nearly unfathomable before this event, but he succeeded in starting the “300 Club” with two quadruple toe loops, a fantastic triple Axel, and incredible skating skills paired with intricate choreography. His Aranjuez free skate has given him trouble this season; although he won his competitions, he continued to make errors, opening him up to quite a bit of criticism and questions of over-scoring. He wanted to change that today.

“I was a little nervous going into it, because I thought it could be the make or break,” Chan said. “Last night I said that this was a turning point. Nationals is where I turn it around.”

The only tiny error in his program was a tight landing on his first quadruple toe loop. He was only able to add a double toe loop in combination, instead of the usual triple, but he added the triple toe loop back in during the second half of his program, on the back of a triple flip.

“I was really happy,” said Chan. “The pacing of the program was great. I took my time, made sure I breathed the entire time, and didn’t rush. I actually didn’t feel tired at the end of the program. I was so excited.”

This outing will only give him confidence heading into the Four Continents Championships, which will be held this year in Colorado Springs, Co., U.S.A. Chan trains there and will surely want to give his newly adopted hometown a fantastic show. After that, it is on to the World Championships where he hopes to defend his title and is looking forward to facing Evgeni Plushenko.

Kevin Reynolds (BC/YT) created a spark of his own with a 158.63-point free skate. His total score of 239.44 was more than enough for the silver medal, and the 21-year-old was definitely satisfied with his effort.

“These are the strongest two programs I have put back-to-back in the same competition,” Reynolds said. “It couldn’t have come at a better time, at the National Championships, so I’m thrilled.”

With three different quadruple jumps—Salchow, toe loop, and loop—Reynolds’ free skate was quite the technical feat. Even with a downgrade on his quadruple loop, the program to music from the video game Chrono Trigger had a next-generation feel to it. This showing at the Canadian Championships is far better than last year’s where he was hampered by a hip injury and placed off the podium.

Although Reynolds did end up competing at the World Championships as an alternate, his 20th-place finish was not what he had expected from himself and vows to finish higher this year.

“I am excited to be on the World Team outright this year and not on the edge as an alternate,” Reynolds said. “I’m looking forward to that. I’ll be training harder than ever.”

While Reynolds’ free skate was strong to the naked eye, the technical panel found a few downgrades on his jumps. He will certainly be focusing on cleaning up those issues when he resumes training at home.

Jeremy Ten (BC/YT) and Elladj Baldé (QC) battled each other for the bronze medal with Ten squeezing past Baldé. Ten earned 136.69 points in his free skate and had an overall score of 207.50, while Baldé’s 138.21-point free skate earned him 206.53 points in total. Ten won on the strength of his program components in his fluid free program to music from Il Postino.

After several injuries during the past year, Ten was hoping for a comeback at these championships. While the comeback did not happen in the fashion that he hoped, he was thrilled and relieved to stand on the podium.

Baldé certainly won the crowd with his electrifying free skate to Michael Jackson. His jumps were more secure than Ten’s, and the decision was so close that it could have gone either way. Although Baldé has made big improvements to his execution and polish, he is not yet at the level that Ten has developed, and today, the panel went with Ten’s sophistication. It is a tough break, but an excellent learning experience for Baldé.

Andrei Rogozine (CO) finished fifth, just making the national team, with a score of 188.64. After being disappointed with his short program, he came back strong in his free skate, managing to stay on his feet on two triple Axels after a secure triple flip-triple toe loop combination. The 2011 World Junior Champion has had a rough time at his senior-level Canadian Championships so far, but this free skate should be a bit of redemption for him.

Liam Firus (BC/YT) was sixth with 187.78 points, just missing the national team. Firus and youngster Nam Nguyen (BC/YT), who finished just behind him in seventh, will represent Canada at the World Junior Championships.