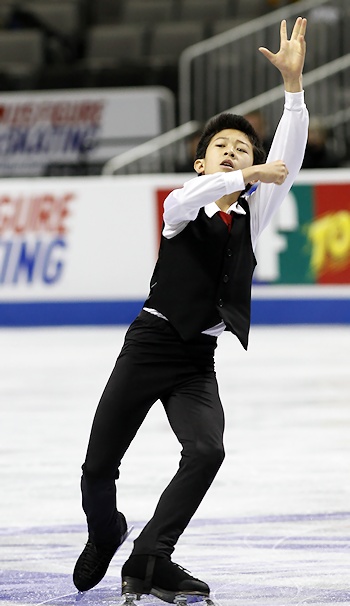 Nathan Chen did it again. For the third year in a row, the 13-year-old Salt Lake City native walks away from the U.S. Figure Skating Championships with a gold medal around his neck. After winning two novice titles in a row, Chen captured the junior men’s title by more than six points, bringing the San Jose crowd to its feet.

“It was really fun,” Chen said with a shy grin. “I had a good time out there—it was one of my better skates.”

Skating to music from the soundtrack to the Godfather, Chen landed seven clean triple jumps, and earned level four on two spins to become the youngest junior men’s champion in recent history (at press time, it was being confirmed if he is the youngest ever).

“When I was really, really little, I saw Evgeni Plushenko skate this music, and I always wanted to skate to it,” he said. “This season seemed to be the right time to do it.”

The program ended with a snarl by the champion, with his hand reaching out to the audience, who was begging for more.

“I’ve been watching old skating programs of past phenomena,” he explained. “I noticed how much power and energy they had in their programs, and I wanted to do that. I really tried to bring that at the end.”

Chen finished with 193.90 points in the competition, a new personal best for the 7th grader.

Timothy Dolensky, the 19-year–old who held a narrow lead over Chen after the short program, skated a strong program to music by the Gypsy Kings, but couldn’t keep pace with the champion’s technical content.

“I had a good time, and I am so happy with how things turned out today,” Dolensky said. “The crowd was great, and I couldn’t be happier.”

With only two senior men eligible for the Junior World Championships next month in Minsk, Belarus, Dolensky looks to be a lock for the three-person team.

“That would be amazing,” he said. “I would look forward to that immensely if it were to happen.”

The Kennesaw State University student finished with 187.84 points in the competition.

Finishing in third place was 18-year-old Phillip Warren from Redlands, Calif., with 182.17 points. His second place finish in the free skate moved him up from fifth place to capture the bronze medal.

“I want to thank the city of San Jose for giving us such a great competition, arena, and fans,” Warren said. “I hoped they like what I did tonight.”

“Mostly I skate for the audience,” he said. “Of course I want to perform well for the judges, too, but my first coach gave me my love for skating and inspired me to do what I love to do. I just want to share that with everybody.”

Both Dolensky and Warren plan to compete as senior men next season, while the 75-pound Chen expects to stick around on the junior level for one more season.

“I’m just getting to be old enough to skate junior internationally, so I think I’ll stay junior,” he said. “I’m still little and need more time to prepare for senior.”

After a devastating 10th place finish in the short program on Sunday, 18-year-old Harrison Choate was hoping to forget the whole thing even happen. But the Weston, Mass., resident stuck it out, and made a rare leap up to the podium, finishing with the pewter medal.

“I was depressed, and told my mom that I wanted to go home,” he said. “My coaches told me to stay focused, and that it isn’t over until it’s over. They were right.”

Choate landed seven triple jumps in his entertaining La Strada program, and ended up with 163.43 points in the event.

“I’m kind of in shock right now,” he admitted. “I can’t believe that this happened.”

Lukas Kaugars, fourth in the short program, struggled in the middle of his program and slipped to fifth place overall. The 16-year-old finished with 154.95 points.

Timothy Koleto, 20, fell from third place after a strong short program to a disappointing sixth after falling twice and making mistakes on several other jumps.