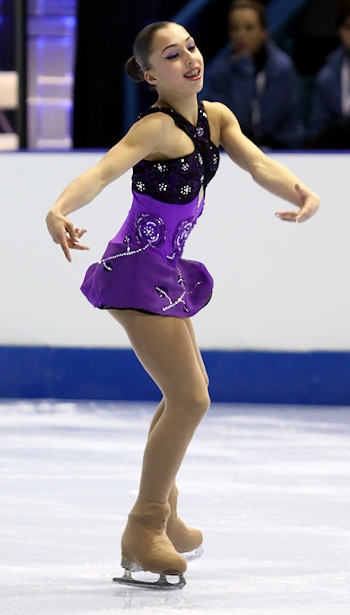 The junior ladies competition wrapped up on Wednesday night at the 2012 Canadian Figure Skating Championships.

Gabrielle Daleman (CO) kept up Ontario’s sweep of the novice and junior titles, successfully defending her first-place position from the short program. Veronik Mallet (QC) moved up to take the silver, while Julianne Séguin (QC) maintained third overall for the bronze.

Daleman’s free skate was not perfectly clean, but it scored 82.98, giving her 130.57 overall. She opened with her explosive triple Lutz, and though she turned out of the landing, the jump was fully rotated.

The skater went on to land three more triples, including one in combination, and her only major mistakes were a stumble out of the triple Salchow and an intended double Axel popped to a single. Her Asturias program was well-balanced and Daleman presented herself well throughout the program, fighting for every point.

Mallet nearly caught up to Daleman in the free skate, scoring 82.13 and finishing second overall with a score of 125.01. Her clean Firebird free skate was extremely well executed. She did not earn any negative Grades of Execution (GOE), and she completed two triples – a Salchow and toe loop. The skater also earned level four on all three of her spins and a level three on her step sequence.

The 2011 Canadian novice bronze medalist, has worked hard on her presentation skills and this was evident in her free program, which was performed with maturity and composure.

A fourth-place free skate was enough to keep Séguin on the podium with a total score of 123.77. Her solid free program score of 80.67 was well-deserved as the program included three clean triple jumps.

In the second half of her program, Séguin also tried another triple Salchow and another triple toe loop, however, while both were rotated, they had messy landings. Her spin levels were low in this performance, but she performed for the audience with a big smile throughout her skate.

Séguin has made dramatic improvements this season. Last year, her 23rd-place finish at Skate Canada Challenge did not qualify her for Junior Nationals at the novice level, but this year she won the junior qualifier. Her bronze medal is not the end of the competition for her this week; she will also compete in senior pairs with Andrew Evans.

Less than a point back with 123.12 points, was Roxanne Cournoyer (QC). Skating a nearly clean program, Cournoyer actually won the technical element score in her 81.60-point free skate, however, her program components were not quite as high. She did not seem to have as much flow as some of the other skaters, though her jumps were solid. She landed two triple Salchows and two triple toe loops.

If Cournoyer can add more difficult content to her program next year, she will have a great shot at moving up to the podium. She was also fourth at the novice level last year.

A sixth-place free skate by Rachel Greben (CO) was not her best, but it was enough to hang on to fifth place with an overall score of 107.77. She went for three triples, two loops and a flip, but the flip and the second loop were both downgraded to doubles. Her opening combination, a triple loop-double loop, was done well.

Overall, Greben is improving—she moved up from 17th place at Skate Canada Challenge in December, as well as at this event last year.