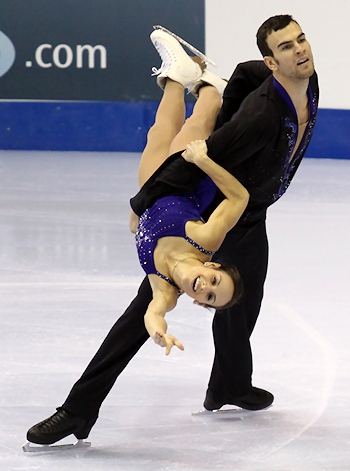 While aspects of the senior ladies free skate were exciting, it was the senior pairs skate that really brought some magic into the Moncton Coliseum at the 2012 Canadian Figure Skating Championships on Saturday evening.

Responsible for the magic were the new Canadian champions, Meagan Duhamel and Eric Radford (QC), Canada’s top pair internationally this year and now the top ranked team domestically. Their score of 129.19 brings them to a new level, putting them on par with some of the world’s top teams in just their second season together.

With a tight landing on the throw triple Salchow and a downgrade call on their triple Lutz combination, Duhamel and Radford could have still topped 130 points—a true benchmark of excellence—but they were definitely not about to split hairs over their score.

Skating to Coldplay orchestrations, the pair absolutely brought the house down, exploding with excitement as their program ended and the audience stood. For both skaters, the win is the culmination of a lifelong dream.

“Eric moved away from home when he was 13, and I moved away when I was 14 with a sole purpose to win a national title,” Duhamel said. “It took 12 years. It took a long time, but we never lost hope. That was the one thing we had going for us through all the ups and downs, in singles and pairs, with our other partners. With each other, we always believed.”

Duhamel came within six points of a national title in 2009 with Craig Buntin, but then endured the heartbreak of missing out on the 2010 Olympic team before pairing up with Radford. Radford stood on the junior Canadian podium with Rachel Kirkland, but a growth spurt affected their development. In 2010, when Duhamel was fighting for an Olympic spot, Radford placed eighth with Anne-Marie Giroux.

Together, however, Duhamel and Radford have achieved what must have seemed so far away during the hard times.

“The opportunity we had—we knew it,” Duhamel said. “We were hungry to go out there and do it. There was no way either of us was going to mess up something in that long program. We were so determined.”

“I think the biggest confidence booster for us, or for any athlete, is performing under pressure,” Radford said. “You can imagine the moment as much as you want, and train really hard every day, but nothing gets you ready for that moment.”

Performing under pressure here at the Canadian Championships will only help Duhamel and Radford as they look toward the World Championships with plans to finish in the top five.

Jessica Dubé and Sébastien Wolfe (QC), the newest partnership among the medal contenders, were thrilled to lay down a nearly clean skate that won them the silver medal.

“We felt great about our performance and we did exactly what we wanted to do,” Dubé said. “We thought, ‘go out there and skate for ourselves and see what was going to happen after that’. We’re just really proud of the work we did and what we were able to do today.”

A doubled Salchow was the only major error in their program to music by Philip Glass. Their on-ice chemistry still has a way to go and they did not captivate the crowd the way that Duhamel and Radford did, but the audience was still quite appreciative of their solid effort.

The team had hoped that they would contend for the podium, not an easy feat for a new pairing where one is new to the senior level.

“She has a lot of experience, so she has helped me out a lot during the season,” Wolfe said about his Olympian partner. “We took both of our weaknesses and our strengths and we put everything together.”

Paige Lawrence and Rudi Swiegers (SK) scored 110.29 in the free skate. Their total score of 168.84 placed them on the podium with the bronze medal, matching their placement from last year. After opening with an excellent triple twist and solid triple toe loops—usually a point of weakness for the pair—they had to fight for their landings, but did not give up. Even after having to abort a lift that only earned a level one because of the mistake, they stayed committed to their performance, doing enough to jump up a spot and land on the podium.

Although Kirsten Moore-Towers and Dylan Moscovitch (WO) landed their difficult jump elements, an odd series of fluky mistakes left the 2011 Canadian champions off of the podium with a score of 164.42.

After landing her opening triple toe loop cleanly, Moore-Towers caught her toe pick and fell belly-first onto the ice, which meant that they missed the second triple toe loops in their planned sequence. Coming down from a lift in their program, they slipped and both fell, resulting in a total of three fall deductions for the program. The unfortunate mistakes did not deter Moore-Towers’ notoriously sunny outlook; in the kiss and cry after their skate, she said, “I still love figure skating.”

Taylor Steele and Rob Schultz (WO) were thrilled to capture fifth place and the final spot on the National Team. After a disappointing pair of fourth-place finishes at the junior level in 2010 and 2011, the team was thrilled to achieve their season goal with a clean free skate.