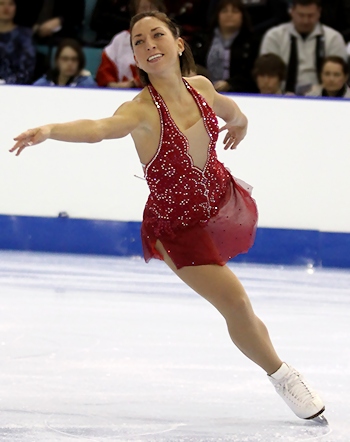 Amélie Lacoste of Quebec performs to “Don’t Cry for Me Argentina” at the 2012 Canadian Figure Skating Championships.

In the most unpredictable result of Saturday’s events at the 2012 Canadian Figure Skating Championships, Amélie Lacoste (QC) dethroned Cynthia Phaneuf (QC) to take over the title of ladies champion.

Winning the national title was Lacoste’s major goal for this season, but she did not come into these championships as the favorite. After a second-place short program, the two-time Canadian bronze medalist was prepared to fight for the top spot.

Although Lacoste’s routine to Don’t Cry for Me Argentina was not without errors, she never gave up on her performance. The 23-year-old popped her two most difficult jumps, an intended triple Lutz and flip, but she landed a solid triple loop-double loop-double loop combination after the halfway point, which earned 10.27 points.

“This was my goal,” Lacoste said. “I just hope I am going to Worlds. I think that’s the rule—if you win Nationals, you go to Worlds, but we’ll see.”

Lacoste and Phaneuf had apparently not been briefed on the World selection process, because Phaneuf was hoping for a different decision.

“I just hope they are going to wait for maybe another skate to choose who is going to Worlds,” Phaneuf said. “I think I deserve my place there and I’m going to work very hard.”

It was later learned that the one entry for the world team will be named following their performances at the Four Continents Figure Skating Championships.

Phaneuf made major changes to her training recently, moving to Toronto to work with Brian Orser and Tracy Wilson, and she says that the change has been a positive one for her. However, it may be too early to see a major difference in her skating.

Phaneuf’s won the free skate (108.28), and her skate was one of her cleanest efforts in recent memory, although she doubled an intended triple Salchow and fell on a downgraded double Axel. Her final two spins also lost levels, but after the performance, the 24-year-old was focusing on her components score instead of the technical elements score.

“Maybe a little bit more on my components,” Phaneuf said when asked if she had any issues with her score. “That’s for sure, but this is something I cannot control.”

The two-time national champion had arrived in Moncton with designs on winning her third title. Winning the silver medal felt more like losing the gold.

“It is frustrating and it hurts, for sure, but I have to deal with it,” Phaneuf said.

Although she dropped from first to third after the free skate, Kaetlyn Osmond (AB/NWT/NU) certainly did not look like she had lost anything.

The fresh-faced 16-year-old sparkled throughout her free skate and continued glowing all the way to the third step of the podium. Osmond’s 98.53-point free skate was ranked fourth, but she hung on to the bronze medal with a total score of 155.47. A few missteps on her landings potentially cost her the national title, but she did not seem affected by the closeness of the marks.

The audience stayed with Osmond all the way through her program, and many seemed surprised that she did not win, but her technical content does not yet match that of the top skaters. She landed five triples in her program, but she does not yet attempt the loop or the Lutz. Still, the youngster has plenty of time to develop and was happy to soak up such a wonderful experience in her debut at the senior level.

Alexandra Najarro (CO) was in third place after the short program, but dropped to fourth overall (151.56) to match her ranking last year. Her Black Swan program had plenty of drama, although a popped flip and a few messy landings prevented her from scoring higher. Nevertheless, she was pleased with her score of 99.22 in the third place free skate.

Adriana DeSanctis (CO) also matched her ranking from last year, moving up from seventh place in the short program with a 96.61-point free skate. Her total of 142.66 just edged her into fifth place for the final spot on the National Team. she has struggled with consistency this season, but delivered an excellent free skate under pressure on Saturday morning. Since she was not in the final flight for the free program, she had to wait all day before knowing that she would move into fifth place.