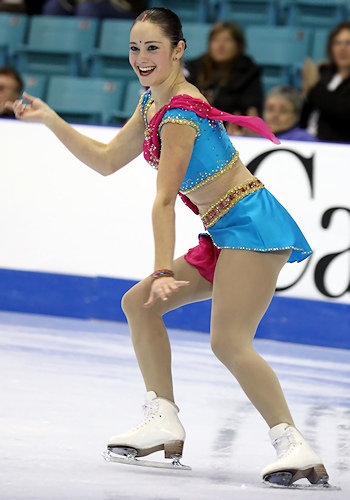 The senior ladies event in Canada always has the potential to be unpredictable. Without a consistent competitor leading the pack, an underdog who rises to the occasion has the chance to play spoiler. At the 2012 Canadian Figure Skating Championships, Kaetlyn Osmond (AB/NWT/NU) was that underdog.

A huge double Axel opened her program, but it was the following element, a triple toe loop-triple toe loop combination, that propelled Osmond to the front. This was the first time she had landed the combination in competition, and only the second time that she had tried it.

With the highlight element behind her, the 16-year-old was able to relax and entertain in her Bollywood-themed program that scored 56.94.

“I wasn’t really expecting anything,” Osmond said. “I just wanted to go out there and skate like I have in practice. I just got lucky.”

Osmond really got the crowd behind her with her exuberant level straightline step sequence, which netted +0.67 Grades of Execution (GOE), and she sailed through the rest of her program.

“Afterwards, my coach started telling me to relax because I can get overexcited,” Osmond shared.

The challenge for Osmond now will be to remain calm for the free skate as defending the top spot is a completely different sort of pressure from being the underdog.

Scoring 52.43 points, Amélie Lacoste (QC) is sitting in second place heading into tomorrow’s free skate. The 23-year-old had the poor luck of being the skater waiting on the ice while the fire alarm was sounding in the arena. It was silenced fairly quickly, but the extra time on the ice could have been a bit unsettling.

That said, Lacoste skated a strong performance, save for a two-footed landing on a downgraded triple Lutz. Her charming program set to Satin Doll let her play to the audience, and like Osmond, Lacoste also earned a level three for her straightline steps. Despite the mishap on the Lutz, the current bronze medalist is confident heading into tomorrow’s free skate.

“I know what I am capable of,” Lacoste said. “And I am looking forward to tomorrow.”

Alexandra Najarro (CO) finished third with a score of 52.34. She opened with a solid triple flip-double toe loop combination and then two-footed the landing of her triple Lutz, but was pleased with her fight to land her most difficult jump. Her waltz/polka program had plenty of energy throughout.

Najarro showed off especially good spins that earned great GOEs, earning level three on two of the spins and level four for her combination spin. Consistency has always been a problem for Najarro, so she will need to bring her best to the free skate in order to stay on the podium.

One of the surprises of the event was Cynthia Phaneuf’s (QC) fourth-place ranking. The jumps were not with reigning champion—she struggled with the triple Lutz, stumbling and putting a hand down, and then fell on her triple loop without completing a combination.

Level issues did not help Phaneuf either. Her flying sit spin was only graded level one, and her straightline step sequence, while awarded great positive GOEs from the judges, was just a level two compared to the level three that the top three competitors received.

These Canadian Championships have come at an awkward time for Phaneuf, as she just changed coaches in last month. The 24-year-old has moved to Toronto and is now working with Brian Orser and Tracy Wilson.

“Changing coach helped me a lot,” Phaneuf said. “We cannot maybe see it today, because it’s not the best program ever. I am happy I made the changes and I am looking forward to the future. Maybe it was a little bit too fast to see the difference here.”

Phaneuf did look more relaxed on the ice than she did during the Grand Prix circuit in the fall. It is notable that she stuck with the performance aspect of her Spanish Guitar short program, even after the mistakes.

Last year’s junior national champion, Roxanne Rheault (QC), is currently in fifth place with a short program score of 47.58. Rheault hit a secure triple toe loop-double toe loop to open her Méditation program, but then nearly sat down on her triple flip. Her lovely spins made up some points, however, and she is still in the medal hunt.

Vanessa Grenier (QC) is just .09 behind Rheault after a solid short program. Grenier had a bit of trouble with her triple Lutz, but stayed on her feet.