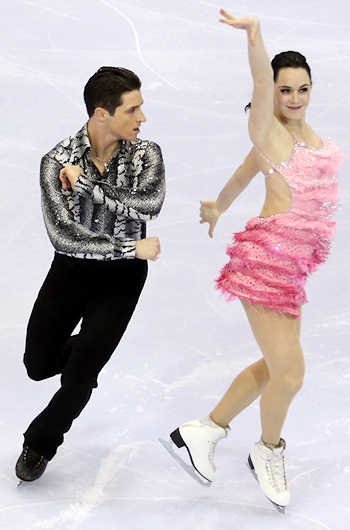 No one predicted that Tessa Virtue and Scott Moir (WO), the 2010 Olympic champions, could be upset at the 2012 Canadian Figure Skating Championships, but that is nearly what happened in the short dance.

In the end, the three-time national champs hung on to the lead by the skin of their teeth, earning 68.41 points in their recently revamped program. In a rare moment of weakness, Virtue got her feet tangled at the end of the first twizzle in their sequence and nearly fell. Showing their experience, Moir was able to hesitate on one foot long enough for her to get her legs back under her, and they completed the rest of the twizzle sequence very well.

The quick thinking and composure to regroup in a split second meant that the twizzle element still earned a level two and only netted -0.50 in Grades of Execution (GOE).

Virtue (22) and Moir (24) changed the order of the elements in their program after their disappointing outing at December’s Grand Prix Final. They moved the lift to the end of the program to create more excitement, and the throwing, twisting entrance received a nice reaction from the crowd, but the technical specialist only found the element to be worth level three, so it still needs tweaking. The team will certainly expect much more from themselves in Saturday’s free dance.

Kaitlyn Weaver and Andrew Poje (NO) had some trouble of their own, or they might have overtaken the Olympic champions. Their short dance was performed well with good energy and solid unison throughout the difficult elements. However, Weaver had to fight for her twizzles and also had to put her hand on the ice to save their optional swooping lift at the end of their program.

The team was disappointed with the levels that they received on their rhumba patterns.

“We’ve gotten two level fours in the rhumba already this season, and we got level two and three here, which we’re not really that happy with,” Weaver said. “If those were a little higher, we would be ahead, which is just really creepy to think about.”

While the individual elements may not have been what they expected, Weaver (22) and Poje (24) are happy with the overall performance of their program and are excited about going into the free dance in a virtual tie. They are not going to focus on the chance to overtake the favorites, however.

“If it was 14 tenths of a point or 14 points, we wouldn’t skate any differently tomorrow,” Weaver said.

“We practice everyday trying to better ourselves and better our performances,” Poje said. “We know we had a great performance at the [Grand Prix] Final, and we just want to build on that.”

The new team of Piper Gilles and Paul Poirier (CO) electrified the crowd in the first group of the short dance competition and earned 62.78 points. After a long wait through the rest of the event, they ended the night ranked third.

Gilles and Poirier, both 20, have some opportunities to increase their levels, but for a brand-new team, the effort was fantastic. The team, who paired up in July, are pleased with their progress so far. Since Gilles, a former international junior competitor in the United States, will not be released from U.S. Figure Skating until May, they entered this competition knowing that it would be the end of their season.

“Nothing depends on our placements, so we can just go out there and enjoy our performances and skate our hearts out,” Poirier said.

Kharis Ralph and Asher Hill (CO) earned 58.92 points in the short dance and are in fourth place, matching their placement from last year thus far. The duo poured plenty of energy into their short dance, which opened with Michael Jackson’s Wanna Be Startin’ Something, and earned level four on their lifts and twizzles and level three on both rhumba patterns. Their circular step sequence had excellent unison, but was only given a level two.

It will take an exceptional performance in the free dance to make up the five points that separate Ralph (19) and Hill (20) from the medals at this point, however, they delivered such a free dance at Skate America earlier this season and are capable of doing it again.

Currently in fifth place with 57.30 points are Alexandra Paul and Mitchell Islam (CO), last year’s Canadian bronze medalists. Paul stumbled in their footwork, which received a level two, and their rhumba patterns were only called level three and level two.

However, getting through the short dance fairly well is an accomplishment for Paul (20) and Islam (21) this season. The team struggled in this program at Skate America and then had to withdraw from NHK Trophy after a collision in practice. Paul needed 20 stitches in her leg, as well as surgery to cauterize an artery, but she is fully recovered now and is feeling strong heading into the free dance.