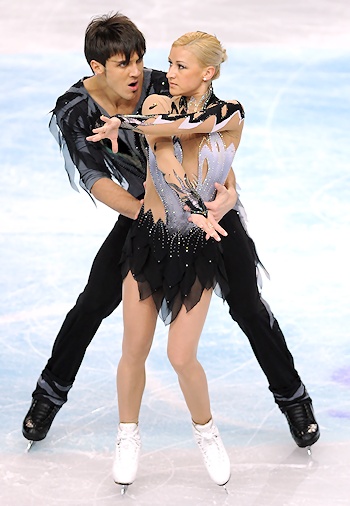 Russian pairs ruled again at the 2012 European Figure Skating Championships in Sheffield, and swept the podium for the first time since 2005. Tatiana Volosozhar and Maxim Trankov were the clear winners, followed by Vera Bazarova and Yuri Larionov and Ksenia Stolbova and Fedor Klimov.

Volosozhar and Trankov are the current World silver medalists, but they competed in their first Europeans together as a team since Volosozhar did not become eligible to represent Russia until March 2011.

Their dramatic Black Swan program wasn’t flawless, but it was a treat. The Russians produced a huge triple twist, a triple Salchow, triple toe-double toe, and a throw triple Salchow, but Volosozhar two-footed the throw triple loop and Trankov struggled with the last lift. The side by side spin was out of sync as well.

“Of course we are very excited to have won,” said Trankov. “It is our first European Championship together and to win the gold is amazing,” Trankov said.

“Without Robin (Szolkowy) and Aljona (Savchenko), it’s not a full pleasure,” he added. “Next time we will be more interesting for us and for the audience, but we are very happy to have all Russian medals. We have not had this since 2005. We’re one team, one family, and we have worked for three medals today.”

“We are extremely happy,” Bazarova commented. “We gave everything we had. It was a little hard to skate last as we had to wait so long and it is already late in the evening. We had practice in the morning and waited all day. We are glad that it’s over now.”

“We had a few little errors on the jumps and in the pair elements,” Larionov added, but didn’t feel pressure was the reason. “We focused on our task that our coach had given to us and tried to fulfill it a 100 percent.”

Stolbova and Klimov turned in an innovative program to a modern arrangement of Polovetsian Dances. They completed a double twist, difficult lifts, and a beautiful throw triple flip and throw triple Salchow. They earned a new season’s best of 113.15 points and had 171.81 points overall.

“It is great for us to have won the bronze in our debut at Europeans,” said Klimov. “Hopefully it will be a good experience for us to build on.”

“We were happy to get the chance and getting the bronze was good,” he added when asked about coming in as replacements for Kavaguti and Smirnov.

Stefania Berton and Ondrej Hotarek of Italy overcame health problems in their preparation to finish fourth with a solid routine to Adagio by Albinoni (158.99 points). The only major mistake came on the side by side Salchow. Berton doubled and Hotarek stumbled out.

“It was the maximum I could have done,” Hotarek shared. “It was the hardest program I’ve ever done. This performance was a good achievement. Skating first in the last group was good and I think it helped us.”

Both skaters had some health issues.

“I had a muscle inflammation due to over training so I had to go to the hospital to get it checked out,” revealed Hotarek. “We just got back to training five days before the championships.”

“We just wanted to do our best and leave our soul on the ice,” said Berton. “We didn’t practice for two weeks because I had the flu and Ondrej had a muscle inflammation.”

After Aljona Savchenko and Robin Szolkowy had withdrawn on Wednesday, the remaining two German teams nearly kicked each other out of the competition. Mari Vartmann and Aaron van Cleave and Maylin Hausch and Daniel Wende crashed into each other right at the beginning of the morning practice. Vartmann suffered a stiff neck and a headache while Wende ruined his skating blade. At first, it was unsure if they would compete.

“It happened during the warm up right at the beginning,” recalled Vartmann. “Maylin (Hausch) and Daniel (Wende) were skating backwards and I bumped into Daniel while skating forward. He had no chance of seeing me or reacting, but this is sport and things like this just happen.”

Vartmann and van Cleave then turned in one of their best performances to date with a triple toe-double toe, throw triple Salchow, and double twist. They pulled up from seventh to fifth with 154.99 points.

“This morning after the practice accident, I first thought I wasn’t going to be able to skate at all,” explained Vartmann. “So I went to the hotel and saw a doctor. I was told it wasn’t anything serious, but I felt strange the whole time, like after a car accident. But then two hours before the competition, I decided to skate for sure and forget about the accident.”

“During the performance I was a little out of it because I had taken a lot of pain killers,” Vartmann continued, “but otherwise I felt fine. Still strange, being on drugs like that, but it went well.”

Wende had his blade sharpened but still felt insecure. He fell on the triple toe and aborted a lift. The couple dropped to seventh (148.82 points).

“I had no control of my blades,” said Wende. “I skated wobbly like on eggs. During the warm up I noticed it, but I was determined to go through with it. Throughout our program I worried about falling, especially on the lifts.”

In between the two German teams, Vanessa James and Morgan Cipres of France finished sixth.