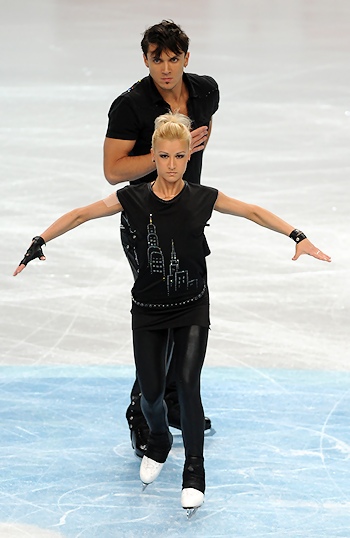 Tatiana Volosozhar and Maxim Trankov of Russia perform to "Bring Me Back to Life" by Evanescence at the 2012 European Figure Skating Championships.

Tatiana Volosozhar and Maxim Trankov led the Russian pairs to a sweep in the Short Program at the ISU 2012 European Figure Skating Championships on Wednesday. Vera Bazarova and Yuri Larionov are currently ranked second ahead of Ksenia Stolbova and Fedor Klimov.

The day started dramatically with four-time and defending champions Aljona Savchenko and Robin Szolkowy of Germany withdrawing due to injury.

Skating to Bring Me Back to Life by Evanescence, Volosozhar and Trankov hit their trademark big triple twist, a solid triple toe, and produced level-four footwork, pair combination spin, lift and death spiral.

The only glitch in the performance came when Volosozhar touched down with both hands on the throw triple flip. The Russians earned a seasons best with 72.80 points.

“We are pleased with the score, but I am not completely satisfied with my throw triple flip,” admitted Volosozhar. “I made an error. Overall it was an okay skate.

“It was like a practice run-through,” added Trankov. “We can do much better and hopefully we’ll get more points at the World Championships because we skated with errors today.”

The Russians regretted that their main rivals had withdrawn.

Bazarova and Larionov had drawn to skate last out of the 18 couples and finished the event on a high note with a strong performance to Tosca. The Russian Champions completed a triple toe, triple twist and throw triple flip, as well as a level-four pair combination spin. The defending European bronze medalists earned 66.89 points.

“Unfortunately I had a little error on the jump (triple toe) today,” said Larionov. “It was a little scratchy. We won’t relax now. There is another day to come.”

“It was just the beginning today,” added Bazarova. “We felt calmer than at Russian Nationals. Nationals is always a very important competition and especially hard. We felt good here. It is a nice atmosphere and we’ve competed in England before at the Junior Grand Prix.”

Larionov explained that they learned only shortly before they competed that the Germans had withdrawn and didn’t feel affected by it.

“We don’t really think about someone else withdrawing,” he commented. “We have another job to do which is to show what we have worked on and to give a strong performance.”

Stolbova and Klimov had come in as a replacement of Yuko Kavaguti and Alexander Smirnov who withdrew because Smirnov underwent appendix surgery on January 4. The reigning World Junior silver medalists proved once again the depth of Russian pair skating. They gave a solid performance to a modern arrangement of Bolero that featured a double twist, throw triple flip and triple toe.

The team from St. Petersburg posted a new seasons best of 58.66 points.

“That was probably the best performance of the season,” Klimov said. “We are very happy with it. Obviously we were a little nervous, but not more than at other competitions. It is harder to compete here than in Juniors. There are stronger rivals and the programs are harder, but basically a competition is a competition and there are always rivals and we try to focus each time in the same way.”

“I am so thrilled that we got the chance to come here,” Stolbova offered. “It is a great opportunity for us.”

Stefania Berton and Ondrej Hotarek came fourth at 54.38 points after Hotarek fell in the footwork. The Italian Champions landed a double twist, triple toe and throw triple loop, but were not happy with themselves on Hotarek’s 28th birthday.

I don’t know what happened (in the footwork),” said Hotarek. “I lost my balance. It happens.”

“Our performance was not good,” said Berton. “We know we can earn much more points. We’re not thinking about our placement right now. The only thing we care about is our next performance.”

“During the preparation for this event, we had some health issues,” shared Hotarek. “It was hard. We’re not as prepared as we would like to be, but we’re here to do our best.”

Maylin Hausch and Daniel Wende of Germany had a somewhat shaky performance to Music Was My First Love to finish fifth at 54.03 points. The throw triple Salchow was wild and Hausch put her hand down, then Wende stumbled badly on the triple toe. Nevertheless, their non-jump elements were all graded a level four and the double twist was a level three.

“We went out to skate our short program at least as well as we did at German Nationals where we did it without mistakes,” said Hausch.

The team also had two weeks of good practices.

“[That] makes it all the more sad that it didn’t work today,” Hausch sighed. “In my opinion it (the throw Salchow) was too good, too high, so I had to open it too early and then my hands just went on the ice.”

Daria Popova and Bruno Massot are a new team and surprised with a nice debut and a clean program that contained a triple twist, triple toe and throw triple Salchow. The French Champions are sitting in sixth with 53.91 points.

“This is our first European Championships,” noted Popova. “We feel very good about this competition so far. I was a bit nervous, but I forgot to worry when I went on the ice.”

The team only was able to come on short notice as Popova had problems getting a visa.

“It was very difficult because I am a Russian national so it takes very long,” she explained. “I got it just on Monday and we arrived on Monday.”

The drama around three-time World Champions Aljona Savchenko and Robin Szolkowy unfolded after the morning practice.

Savchenko had injured her left thigh in a fall on a throw jump in practice on January 12. She tried her best to be fit and was able to land the solo jumps and throw triple Salchow, as well as even a throw triple Axel in practice, but the seemingly easier elements were the problems.

“I cannot do spins,” Savchenko said.

When she tried the first pair spin since the accident in the morning practice, she aggravated the injury and was in pain again. After a long discussion with German team officials and the German medical staff, coach Ingo Steuer and his students decided to give up.

“It was a very hard decision for us to make,” Steuer said. “To come to Europeans and to be unable to compete is very tough.”

At one point, the team felt that pain was somewhat “under control” until Savchenko practiced in the morning.

“The risk was too high to aggravate the injury further,” said Steuer.

German team doctor Stefan Pfrengle pointed out that Savchenko should be able to resume practice within five to seven days.