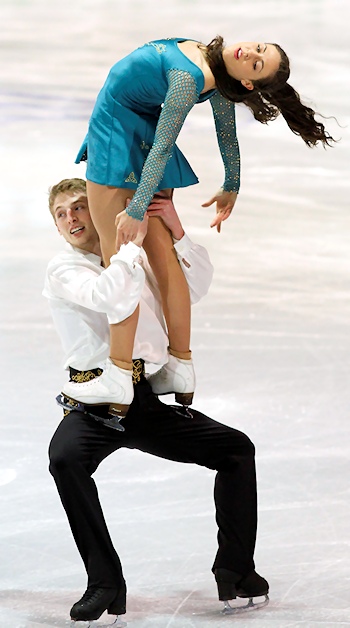 USA's Alexandra Aldridge and Daniel Eaton perform to music from "Riverdance" and "Lord of the Dance" at the 2011-12 Junior Grand Prix Final.

In their third season together, everything is looking up for 17-year-old Alexandra Aldridge and her 19-year-old partner Daniel Eaton. The duo has two U.S. titles to their credit, and is heading to the World Junior Figure Skating Championships next month in Minsk, Belarus.

The two got off to a rather bizarre start in the beginning of their partnership, but are fast becoming one of the rising stars of U.S. Figure Skating.

At the 2009 U.S. Championships in Cleveland, Eaton finished in 10th place with former partner Sameena Sheikh. When Sheikh was abruptly forced to retire from the sport, Eaton was suddenly looking for a new girl to team up with.

“I took some time off after nationals to have ankle surgery, and my partner had hip replacement surgery,” he explained. “She wasn’t able to continue, so I started looking for a new partner.”

Aldridge was training in Texas with coach Pierre Panayi, waiting for the right partner to come along when Eaton was suggested as a possible match. The two decided to have an audition.

“The first two days of the tryout weren’t good,” she remembered with a laugh. “Nothing felt right. He held my hand so weird. But after a month, everything started to come together.”

A few months later, Aldridge and Eaton were a full-fledged partnership, and immediately found themselves heading to the 2010 U.S. Championships in Spokane, Wash. With just eight months of training time under their belts, Aldridge and Eaton won the U.S. novice title, but knew very little about each other outside of skating.

“The first season together, we were pretty quiet,” Aldridge said. “After we won novice we starting getting to know each other, and started growing up a little. We started to get through the awkwardness of a new partnership.”

In order to progress as a team, Aldridge and Eaton knew that they had to start getting to know each other, and to begin to develop on ice chemistry. The end result is a partnership built on mutual respect and clear communication.

“We have a very comfortable relationship on ice,” Eaton said. “We can give constructive criticism to each other, and nobody gets upset. It’s helpful in a partnership when you can tell your partner things like, ‘if you do this, then it makes it easier for me to do that'”.

Their second season brought riches in the form of Junior Grand Prix assignments—two to be exact. They debuted with a sixth place finish in an event in France, and followed it up by narrowly missing the podium in Great Britain where they placed fourth. At the 2011 U.S. Championships in Greensboro, NC, Aldridge and Eaton finished in fifth place.

“Immediately after the free dance at nationals, we decided that the next year would be our year,” Aldridge admitted. “We decided that we would push ourselves harder than we ever had before.”

Motivated and hungry, Aldridge and Eaton were determined to make a big move this season—the goals were to win the U.S. Junior title, qualify for the Junior Grand Prix Final, and compete at the World Junior Championships in Belarus.

“We knew that we had to do something spectacular, and we knew it was time to get serious,” Eaton said.

With encouragement from choreographer Pasquale Camerlengo, Aldridge and Eaton selected music from Riverdance and Lord of the Dance as their free dance for the season—a decision that took some time for Eaton to warm up to.

“My father took me to see an Irish Step Dancing show in Florida, and I thought that there was no way that we could pull that off,” he said. “But I knew that it was something that nobody else was going to do, and decided to put it all out on the line.”

Aldridge remembers the first practices when the program was in its infancy.

“We got all of the choreography, and we did a miniature run through without any of the lifts,” the high school senior explained. “I remember being so tired, I didn’t know how we were going to fit them in. I realized, however, that our coaches would never have given us this program if we couldn’t do it.”

Aldridge and Eaton are led by a team of experts that is somewhat of a mini ‘Who’s Who’ from the world of ice dancing. At the helm is two time World Champion Angelika Krylova, who takes ownership of overseeing most of the team’s run-throughs. They also work with five time U.S. Champion Elizabeth Punsalan and Olympian Natalia Annenko.

“Liz nitpicks every edge and every detail in the Cha Cha pattern,” Aldridge said with a sigh. “And if Natalia could, she would spend weeks and months on inside edges.”

This season, Aldridge and Eaton have a new member to their coaching team—2010 Worlds bronze medalist Massimo Scali.

“He makes training more intense,” Eaton explained. “He doesn’t allow excuses because he’s been there and knows them all. If you walk in to practice late, you’re on the ice an extra 30 minutes. He’ll make you do extreme laps around the rink.”

Aldridge added. “He’s really a lot of fun, and works very hard. He really understands partnerships, and knows how holds feel. He has helped us figure out some of our partnering problem spots.”

Their first competition of the season—the 2011 Lake Placid Ice Dancing Championships in July marked the debut of Aldridge and Eaton’s ambitious free dance. They finished in first place in both phases of competition.

“We worked hard to put out a good program for the judges,” Aldridge said. “We wanted to impress them. We received great feedback.”

So with the boost in confidence from Lake Placid, Aldridge and Eaton headed into the fall Junior Grand Prix season ready to take on the world. Their first assignment took them all the way to Riga, Latvia.

Aldridge and Eaton were then assigned to the event in Innsbruck, Austria.

“This time I made a mistake in the short dance,” Eaton said with a laugh. “It was probably the hardest event of the Junior Grand Prix this year, and we knew that we had to finish in second place with a high score to make the Final.”

In the end, they did finish with the silver medals, and at the end of the series, they were one of the six teams to qualify to the Final in Quebec City in December.

“To realize that you are in the top six junior teams in the world is overwhelming,” Eaton said. “It was a wow moment for us.”

At the Final, despite qualifying in sixth place, Aldridge and Eaton finished in fourth, just behind a trio of Russian teams.

“We were the only U.S. team to make the Final this season,” Eaton pointed out. “We worked really hard to improve upon our (sixth place) seed, and we did that. It was a great event for us.”

In January, Aldridge and Eaton were able to check off another season goal—winning the 2012 U.S. junior ice dance title in San Jose, Calif. The duo was named to the 2012 World Junior Championships team as a result.

“Our goal is to go on the ice and put out senior programs,” Eaton said. “We want to show that we have maturity in our skating, and that we have the full package.”

Aldridge continued. “We’re striving to peak in Minsk, and we’re training so hard to make that happen.”

But to make the podium, they will have to overcome the same trio of Russian teams that swept medals in Quebec City.

“They are really good,” Eaton said, “but I want to prove that the Russians aren’t the only ones who can skate well.”