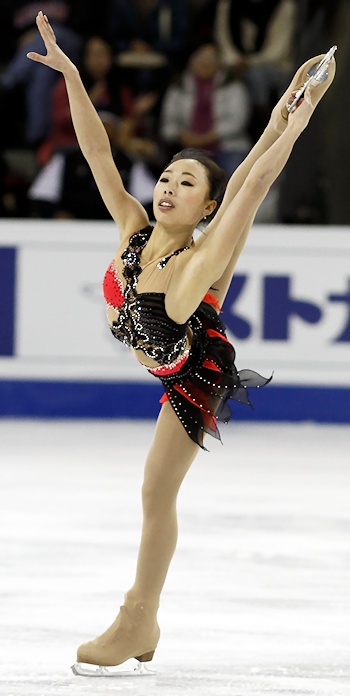 Last week in Colorado Springs, Colo., one of the biggest surprises came in the form of China’s 16-year-old Zhang Kexin.

The 5-foot-2 bundle of power finished in fifth place in her first ISU Championship event at the 2012 Four Continents Figure Skating Championships. With just a handful of international competitions under her belt, Zhang fit in well among the top flight of skaters with much more experience.

“I didn’t do very well through my junior career, and I have been working very hard since then to improve,” she said rather modestly. “This is the first time that I did really well in competition. I think that because of this competition, I have grown quite a bit mentally, and now I am not afraid of coming to competitions at all.”

Zhang competed two seasons on the Junior Grand Prix circuit with modest results, but this season, she has been coming on strong. It was when she received a host invitation to compete in the Cup of China in November—her first Grand Prix event, that Zhang started to turn heads.

“I felt very relaxed when I competed in the Grand Prix because it was in China,” Zhang, who finished in fourth place, said. “I made a little mistake on the Lutz in the short program, and in the long program I tried to attack to everything to make a clean program. Although I made a couple of small mistakes, I was very satisfied with my performances.”

Zhang was selected to compete in the Chinese National Winter Games last month, and finished with the silver medal. Her strong finish there qualified her for the competition in Colorado. A native of the Heilongjiang Province in northern China, Zhang was enamored with the colorful landscape for which Colorado Springs is known.

“I really liked Colorado because it is very scenic. There is so much nature, and I really like it.”

A shy, yet well-spoken young lady, Zhang has developed a love of travel, and the incentive of visiting new places for competition helps to fuel her to practice harder.

“When I travel for competitions, I like learning about new places like the special characteristics of each place,” she said with a child-like smile. “Every opportunity to travel abroad is a new experience for me, and I don’t want to have any regrets about missing what the other countries have to offer.”

Li Mingzhu, former coach of 1995 World Champion Chen Lu, is responsible for Zhang’s training—a fact for which the fourth place finisher from this year’s Chinese national championships is thankful.

“My coach is very much into details from my toes to my fingertips. She is very good at teaching the basics such as crossovers,” Zhang explained. “I have benefited a lot from her because of her paying attention to all of the details.”

Zhang began her coaching relationship with Li back in 2008 when she was handpicked to join Li in the Los Angeles area and train at the Eastwest Palace. Zhang was one of three hopefuls who were selected to try to rejuvenate Chinese ladies figure skating.

“It was my first time away from home,” Zhang explained. “We stayed in Los Angeles for about a year. It was a challenge because there were a lot of changes to my everyday life. I learned a lot because of it, though.”

Zhang had the opportunity to train with Four Continents bronze medalist Caroline Zhang while she was living in the United States. During that time, (Caroline) Zhang won the silver medal at the World Junior Championships and placed third at the U.S. Championships.

Since returning to China, Zhang has trained in Beijing. From time to time she works with Li Chengjiang, a two-time Olympian and the 2001 Four Continents Champion.

“I don’t work with him very often, but he has a very good sense of humor,” she said. “Sometimes he gives me tips on certain jumps, but he mostly takes care of the off ice training more than the on ice training.”

Based on her strong finish in Colorado Springs, Zhang has been selected to represent China as the sole representative in the ladies competition at next month’s World Championships in Nice, France.

“It will be my first time in Nice, and I am looking forward to it,” Zhang said proudly. “Competing in Colorado Springs was very good preparation for me because of the altitude, and now when I go to Nice, I think that I can do better because of it.”

Zhang is planning to put her signature move—a triple toe loop-triple toe loop combination—into her programs in Nice. She explained that the high scoring element came to her rather easily.

“I pretty much got it the first time I attempted it, and it didn’t take it that long to master it,” she said. “I landed it (cleanly) on the third try.”

Zhang has no plan in the grand scheme of things for her career path in skating. She simply hopes to get more consistent, and is willing to put the work forth to make that happen.

“I want to take my skating career step by step,” she explained. “First of all, I want to bring my training into competition so that I can execute the same technical level as I do at home. I want to be able to master the pieces of competing that I am able to control.”

Zhang does have a fighting spirit, though, and isn’t shy about being ambitious about placing well in future competitions.

“I am going to train even harder, and put a lot more thought into my practice so that I can start building consistency and begin winning medals,” she said with conviction.

Outside of the rink, Zhang is quite private. She enjoys the solitude of her bedroom, where she winds down from a long day of practice by sitting in front of her computer or TV screens.

“I like to go to my room and watch entertainment programs—especially this one channel that is from the Hunan Province, ” she said. “I also like shows geared towards young people. I also like to go online, write in my diary, and practice calligraphy.