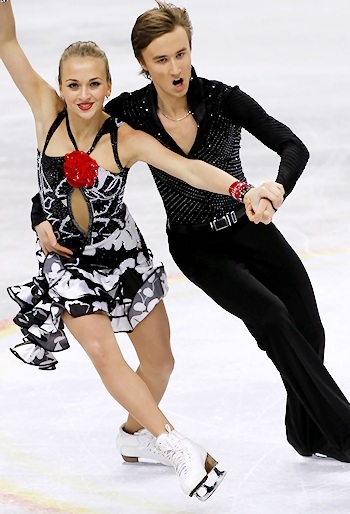 Victoria Sinitsina and Ruslan Zhiganshin led the Russian dancers to a sweep in the Short Dance as the 2012 ISU World Junior Figure Skating Championships officially opened Wednesday in Minsk, Belarus.

Sinitsina and Zhiganshin turned in a strong performance to their Bla Bla Bla Cha Cha Cha and a Samba, showing off their soft skating skills and strong technique. Their twizzles, the first Cha Cha sequence, and rotational lift merited a level four, while the second Cha Cha sequence and the side by side footwork were a level three.

“It was a good performance today, but obviously we would have liked to [have gotten] a level four for all elements,” Zhiganshin, 19, noted.

“It’s our first Junior Worlds and I felt nervous, but I tried not to think about this,” 16-year-old Sinitsina added. “We just want to skate clean. For me it is harder to show the emotional side of the Latin dance as we are very focused on the elements.”

Stepanova, 16, and Bukin, 18,  are just 1.10 points behind the leaders with 62.68 points. The JGP Final bronze medalists completed two level-four Cha Cha patterns, fast twizzles, and a rotational lift in their lively Caramelio Cha Cha and La Colegiala Samba. Only the side by side footwork was a level three.

The son of 1988 Olympic Ice Dance Champion Andrei Bukin and his partner earned 62.68 points, just below their season’s best.

“Today I didn’t feel so confident, but overall we are happy with our performance,” Stepanova said. “For us, it’s also our first Junior Worlds and we were nervous because of that, but we tried to skate as we do in practice.”

Yanovskaya, 15, and Mozgov, 16,  looked confident in their performance to Cha Cha and Samba and picked up a level four for the twizzles and the rotational lift to score 58.89 points.

“I think our skate today was a little dirty, not perfect, but overall it wasn’t bad,” Mozgov shared. “The emotional part of the performance comes easier to us than the technical part.”

While Sinitsina and Zhiganshin and Stepanova and Bukin most likely will battle it out for gold and silver in the free dance on Friday, barring any major errors, several teams still have a chance to take the bronze.

Gabriella Papadakis and Guillaume Cizeron of France, who skated last out of the 25 teams, came in fourth and improved their season’s best by nearly six points when they scored 58.09. They were the only other team to earn a level four for both Cha Cha Congelado patterns.

“We are very pleased to have performed our elements and our program the way we wanted,” 17-year-old Cizeron commented. “We haven’t missed anything. We got the levels we wanted and we are happy with the job we did.”

“We hoped to achieve a season’s best and we are happy that we did,” Papadakis, 16, added. “We’ll try to do the same in the free dance hoping that it pays off and that we can move up in the standings.”

USA’s Alexandra Aldridge and Daniel Eaton, who were ranked fourth in the JGP Final in December, have a shot at the podium in fifth at 57.76 points. The Americans gave a solid performance to the Cha Cha I Need to Know and Mambo No. 8. Their straight line lift and first Cha Cha sequence garnered a level four.

“We feel really good,” Eaton, 19,  announced. “We got the levels we wanted, we skated really strong, and we’re looking forward to Friday with the free dance. It’s about a point (to the podium) so we’re going to fight. It’s the last one (free dance) of the season, so it’s going to be our best.”

Canada’s Nicole Orford and Thomas Williams came in sixth with 55.86 points. They skated right after Sinitsina and Zhiganshin and their elements did not look as effortless in direct comparison. The Canadians only earned a level two for the side by side steps, but had a level four for the first part of the Cha Cha, the twizzles, and the rotational lift.

Maria Nosulia and Evgeni Kholoniuk of the Ukraine came in seventh ahead of USA’s Lauri Bonacorsi and Travis Mager.

Germany’s Shari Koch and Christian Nüchtern and Italy’s Sofia Sforza and Francesco Fioretti round up the top ten.