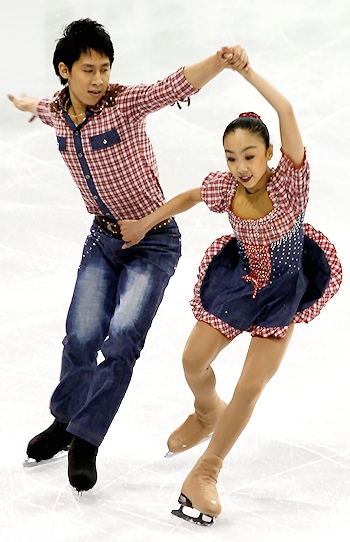 It was a hoe down of a good time at the 2012 Four Continents Figure Skating Championships as Chinese national champions Wenjing Sui, 16, and Cong Han, 19, won the pairs short program with a routine fit for a barn dance.

Skating to Country Dance by Josh Turner, the duo turned in a season’s best performance, and earned a total of 66.76 points.

“Today we got [a lot] of points,” Han said. “We did our best in the short program, and the points were very amazing and wonderful. We feel so happy. My partner did very well, and I am proud of her.”

The two-time and reigning Junior World Champions had the most spark in the competition today, and showcased some pretty huge technical elements—what is becoming the hallmark of Chinese pairs skating. Their triple twist lift was the highest scoring element in the competition.

“In the free skate, we will do a quad twist,” Han explained. “We will also try a quad throw. We hope to succeed.”

In second place with 63.35 points are the newly crowned American champions Caydee Denney and John Coughlin. Trained right here in Colorado Springs, Coughlin was excited to be competing in front of a home crowd.

“It felt really good,” said Coughlin. “It felt like I hoped it would skating at home, and I felt that support from our friends and family. It was nice to put out a good performance for them and for ourselves.”

“I think I was most excited to compete here this season,” said Coughlin. “After our program, we sat with our coach, and we all agreed that this was a step in the right direction in heading to the World Championships. This is one of the stronger pairs fields from top to bottom at the Four Continents Championships that I can recall, and it’s great to be sitting here in second place.”

Coughlin and his 18-year-old partner erased the mistake they made two weeks ago in San Jose, Calif., nailing each element and putting an exclamation point on their East of Eden program with a strong throw triple flip.

“It obviously feels great to land it and it’s obviously the improvement in the program (from the U.S. Championships),” said Coughlin regarding the throw jump. “I thought we felt more comfortable. Our components improved greatly from our last Grand Prix score, so I’m excited about that.”

“Since nationals, we have focused on polish and the character of the program,” the 26-year-old added. “We really didn’t have time to make any changes, so we paid attention to how much we relate and making everything as clean as possible.”

“We are really happy with our skate today,” said Brubaker. “Like Caydee and John, we feel that this is a step in the right direction, and is the way you want to skate heading into the World Championships.”

Marley, 16, and Brubaker, 25, were nearly clean in their Singing in the Rain program—the lone mistake was a tight landing by Marley on the throw triple Lutz. Still, the Los Angeles based duo earned a career best 62.42 points.

“We left some points out there on the throw,” Brubaker pointed out. “Unless you are getting plus threes on every element and tens in all of your components, there is always work to do. If you settle, you end up losing points in the long run. We always work on presentation, focusing on our interaction because for the type of music that we choose, it is required.”

The Japanese team of Narumi Takahashi, 20, and Mervin Tran, 21, finished in fourth place with a beautiful program to an instrumental version of John Lennon’s Imagine. Though they opened with a mistake on their triple Salchows, the Grand Prix Finalists were clean the rest of the way through the program. They scored a career high 62.42 points, putting themselves in medal contention.

American bronze medalists Amanda Evora, 27, and Mark Ladwig, 31, finished in fifth place with 60.75 points, also a career best. The Olympians’ lone mistake was an under rotation call on their side by side triple toe loops, but their experience was rewarded with the second highest component scores of the day.

“I thought it was good,” Evora commented. “I think it was an improvement from nationals. We skated better here than we did a few weeks ago, so that’s something we can take something from as well as ending the season on a happy note with our short program.”

“I thought it was a great crowd,” said Ladwig. “They were cheering for Team USA and it had the feel of the big event that it is, and I feel it was a great performance for both of us. I felt we finished off every element really well even though there were a few levels in the footwork that I’m not sure about.”

“What our goal was here was to break 60 as we have and we are only six points from the top,” Evora added, “so anything can happen in the free and we are excited to skate tomorrow.”

In an interesting twist, the Canadian team reversed their standings from their national championships with bronze medalist Paige Lawrence and Rudy Swiegers finishing the highest of the three teams in sixth place.

Teammates and silver medalists Jessica Dubé and Sebastian Wolfe are in seventh, while champions Meagan Duhamel and Eric Radford sit in eighth.

Two Chinese teams—Huibo Dong and Yiming Wu and Yue Zhang and Lei Wang are in ninth and 10th, respectively.