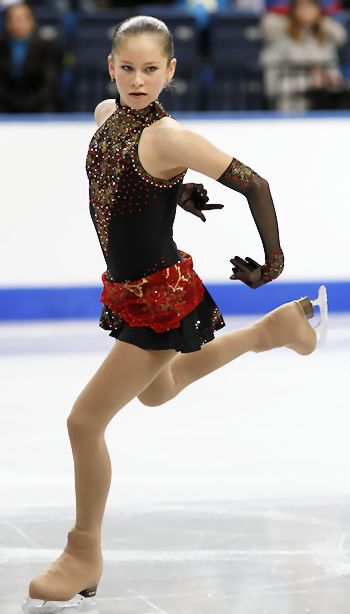 USA’s Gracie Gold came in second, while defending champion Adelina Sotnikova from Russia had to settle for third place.

Lipnitskaya was impressive with her precision and high-quality jumps and extraordinary flexible spins, and her triple toe-triple toe, triple Lutz, and double Axel were effortless.

“Today everything worked out for me,” said the 13-year-old. “I skated clean, and I enjoyed skating. I am pleased with my performance. I really wanted to be at this championship and I am very glad to be here. I didn’t really expect to be in first after the short program, but I am very happy about it.”

Gold had to skate seventh out of the 31 skaters and was the first to put out a triple-triple combo (triple flip-triple toe in her case). The toe was a little shaky, but she also landed the triple Lutz, a double Axel, and earned a level four for the three spins to score 58.00 points.

Though the 16-year-old is athletic and has powerful jumps, she lacks polish.

“I am happy with my overall performance,” said the U.S. Junior National Champion. “I got all the levels I had hoped for. The jumps could have been a bit cleaner, but they were still good.”

“It’s my first big international competition so I’m happy with what I did overall,” continued Gold. “It’s a pleasure to be here. I wasn’t sure if I would get to go and they chose me and just being here is a wonderful thing. Being in the top three is amazing. That wasn’t necessarily my goal, but now that I am, it is extremely exciting.”

Sotnikova went for a triple toe-triple toe combination, landed the triple Lutz and double Axel, but the change combination spin was a level one and merited 1.96 points only. The Russian National Champion scored 56.57 points.

“I am not completely satisfied with my performance today,” admitted the 15-year-old. “I missed the spins that I never missed, but I hope to make up for it in the free skating tomorrow and not to repeat my mistakes.”

“It is a little harder this year, because I was the champion last year and I wanted to confirm this result,” continued the reigning World Junior Champion said. “Today I made a mistake in the short program and I will try not to make any mistakes tomorrow so that I can move up, but the most important thing is to skate clean.”

Sotnikova confirmed that she will attempt her triple Lutz-triple loop combination in the free skate.

Skating to Scent of a Woman, Satoko Miyahara of Japan underrotated the flip in her combination with a triple toe, but put out a triple Lutz and three level-four spins. She came in fourth at 52.97 points.

“I had fun in my short program today and I am glad that I did all my jumps,”  the Japanese Junior National Champion said. “I was a little nervous and I’m a bit sad that the flip was underrotated.”

USA’s Christina Gao held it together in her short program to Mendelssohn’s Violin Concerto and hit a triple toe-triple toe, a triple Lutz (but got an edge call), and a double Axel, however, the flying sit spin garnered only a level one. The 16-year-old achieved a new season’s best with 52.66 points.

Gao was happy with her performance, but admitted that the Grand Prix season had a been a bit rough for her.

“It’s a learning season I think,” she explained. “I told myself ‘don’t worry about the score, the outcome’. So I’m just happy that I did what I did. I stayed on my feet and I landed everything. I lost some levels and I had to fight for some landings and they weren’t as smooth.”

“At the beginning of the season I wasn’t training very well at all,” Gao continued. “Now I started to train much better and I think I’m ready for the free skate.”

Zijun Li of China downgraded her planned triple toe-triple toe combo to a triple-double and also lost points on her Lutz due to an edge call to place sixth (51.74 points).

Korea’s Hae-Jin Kim opened her routine to Moonlight Sonata with a triple toe-triple toe, but stumbled out on her triple Lutz. She is currently ranked seventh (51.56 points).

Joshi Helgesson of Sweden turned in a clean program that included a triple Lutz and a triple Salchow-double toe, but she lacked speed. She finished eighth with 50.74 points.

Ziquan Zhao from China was one of the six girls to land a triple toe-triple toe combination and currently sits in 10th place (49.22 points).