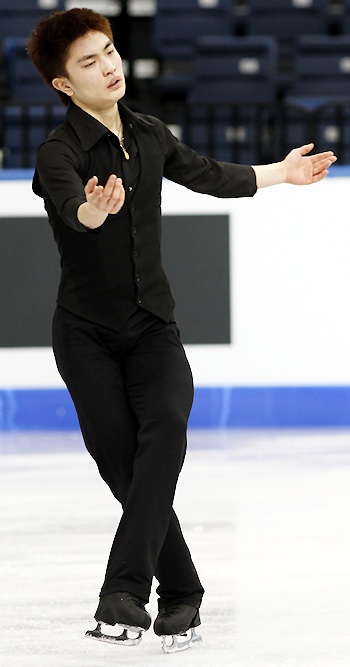 Han Yan of China performs to "Zigeunerweisen" for the free skate at the 2012 World Junior Figure Skating Championships.

Han Yan made history by winning the first Men’s Junior World title for China at the 2012 ISU World Junior Figure Skating Championships on Saturday in Minsk, Belarus. Joshua Farris and Jason Brown took silver and bronze for the USA, respectively.

Performing to his to the classical gypsy music Zigeunerweisen, Yan opened with a triple Axel and followed up with a quadruple toeloop and five more clean triples to score a season’s best with 147.57 points.

“I feel very honored to be the first Chinese man to win this title,” said the 15-year-old. “Today I think I skated pretty well, I showed my level. The placement doesn’t matter to me, for me it is more important to skate well. This title is an early birthday present for me.”

Overnight leader Farris completed two triple Axels and six more triple jumps in his routine to Piano Concerto No. 3 by Sergei Rachmaninov. The only glitch was a turnout on the back end of the triple Lutz-triple toe combination.

“I thought my performance was phenomenal,” said Farris. “I haven’t skated like that in a while in my long program, so I was happy about that. My goal going into this competition was to skate two strong, clean programs and I thought I did that except for a few bobbles.”

“I actually have the quad toe,” the JGP Final bronze medalist answered when asked about including a quad toe. “I tried it at nationals. I didn’t succeed in landing it, but I did pull in. I’ve been doing it in practice. For this competition I wanted to skate clean and strong and I did that.”

Brown stood in fourth place following the short program and turned in a strong performance to Flow Like Water that was highlighted by seven triples, including a “Tano” Lutz (hand over the head) that merited a plus three from five judges. His spins were fast and featured good positions.

The JGP Final Champion earned a new season’s best with 144.70 points, and overtook Denis Ten to claim the bronze with 214.90 points.

“I’m so honored to be up here and to be able to medal for the USA,” the 17-year old shared. “My goal was to skate two great programs that I’ve been practicing and it looked like that is what happened. It was great to be around some of these amazing skaters this week.”

Kazakhstan’s Ten dropped from third to fourth overall (208.20). The 18-year-old fell on an underrotated quad toe, singled a flip, and underrotated the triple Lutz. Though he landed two triple Axels, the second one was two-footed. He arned 134.42 for his Tango routine.

Zhan Bush of Russia doubled his planned quad toe, but rallied to hit seven triples including a triple Axel. However, some of the landings lacked flow and he touched down with his hand on the triple Salchow. The 18-year-old remained in fifth place with 196.06 points.

“Maybe I could have moved up if I had landed the quad,” ventured the 2012 Russian Junior Champion.

China’s He Zhang, who does not yet have a triple Axel, finished sixth overall (193.97) with a solid performance to Rhapsody in Blue.

Keiji Tanaka of Japan rebounded from his disappointing short program and reeled off two triple Axels and five triple jumps in his program to The Untouchables. The overall quality of his performance and elements was strong. The 2011 World Junior silver medalist moved up from 11th to seventh place (189.86 points).