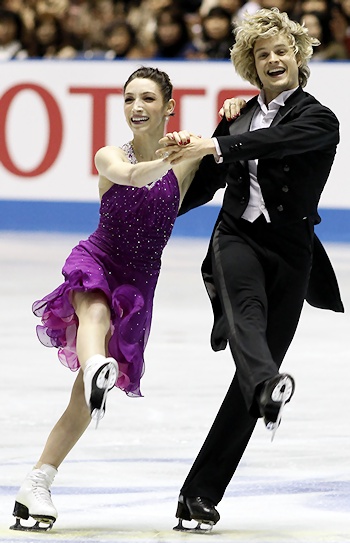 The 2012 ISU World Team Trophy of Figure Skating continued with the Free Dance, and USA’s Meryl Davis and Charlie White took revenge for their defeat in Nice at the World Championships by beating their Canadian arch-rivals Tessa Virtue and Scott Moir. Nathalie Pechalat and Fabian Bourzat of France danced to third place.

Davis and White wanted to prove themselves and they gave a 100 percent in their Waltz program to Die Fledermaus. The 2011 World Champions whirled over the ice, executing their difficult elements effortlessly. The crowd was with them and roared, especially for the fast twizzles and the lifts. The Americans scored 111.18 points and accumulated 183.36 points to take the victory.

“We’re really excited about our performance today,” said Davis. “This is a program we really fell in love with and to put it out there for the last time, we really wanted to make it special between the two of us.”

“I consciously wanted to win this,” stated White. “Coming off Worlds, we skated well and how we wanted to, but we didn’t place how we wanted to. We had the amazing opportunity here to do two programs we have grown to love. It’s not Worlds, but it is close. We wanted to prove ourselves. Regardless of placement, we wanted to show our skating is at the top.”

“With the team aspect, today was a breeze,” White continued. “It was the easiest program I’ve ever done. We got tired about halfway through the short dance yesterday, but look at that team box, it helped us to push through and skate. So there were two things at work for us, to help the team and to come off Worlds and prove ourselves.”

Virtue and Moir looked a little pale in comparison today, although they garnered one more level four than Davis and White. The Canadians earned the highest level of difficulty for the circular footwork, the twizzles, lifts and the dance spin, while the U.S. Champions got a level three for the footwork sequences and a level four for the remaining five elements. The Americans scored especially high on the Grades of Execution (GOE), collecting plus threes and plus twos from all judges while, Virtue and Moir had a few plus ones.

The judges also awarded Davis and White the highest component of 10.00 (17 times) for performance, choreography, and interpretation/timing. Virtue and Moir had one 10.00 in each of these components. The Olympic Champions were a little disappointed with the outcome.

“It is a little surprising, but that is figure skating,” said Virtue. “Technically, I think we’ve had a very strong season. We wanted to enjoy our skating this season and I think we just did that.”

“We felt it was a strong skate,” added Moir. “It was tough two weeks after Worlds, trying to keep the mojo going. It was kind of a battle last week, but coming here we felt fresh, we felt energized. We put out two really solid performances. We really felt the joy in our skating this year, which really helps us for the future as well.”

Virtue and Moir will now head off to Halifax for the Canadian Stars on Ice tour.

Pechalat and Bourzat entertained the crowd with their rhythmic and energetic dance The Pharaoh and His Mummy. The European Champions produced their trademark interesting lifts and smooth step sequences to earn 101.26 points, which added up to 167.83 points overall.

“We are very pleased with the way we skated, plus we never had done this program in Japan,” said Pechalat. “The atmosphere was great, the audience was great, we felt their support and clapping, and that gave us extra energy. I am happy to finish the season this way.”

“We did a nice performance,” agreed Bourzat. “I can’t tell if it was more elevating than in Nice or not, because I felt great in both cases. As Nathalie said, the crowd pushed us through until the end of the program. This is a program that we really liked doing in the second half of the season.”

Their teammates had prepared a special surprise and dressed up as mummies by wrapping toilet paper around themselves.

“It was a nice surprise to see our teammates dressed up as mummies,” praised Pechalat. “We said they are going to do the pyramid, but that they would dress up like that was a surprise. It felt like there were seven of us on the ice. This is a great team, the best team.”

Anna Cappellini and Luca Lanotte turned in a strong performance of their La Strada routine. All elements but the diagonal steps garnered a level four. The Italian Champions scored a season’s best of 98.30 points and finished fourth at 162.00 points.

“I think the only other time we got a level four in the circular footwork was in 2008, and now it has become more difficult to get the levels,” said Lanotte. “We are a little surprised actually. At the beginning of the program I somehow didn’t feel the right connection between my brain and body. We waited for the last, last competition of the season to get a new season’s best score.”

“It worked well,” Cappellini added. “We were a little tired at the end of the day yesterday. I felt that I was cheering and screaming for five hours and back in the hotel room I just passed out.”

Elena Ilinykh and Katsalapov of Russia produced an emotional program to Ave Maria, but were a little sloppy on some elements which resulted in lower levels. The European bronze medalists collected a level four for the twizzles and two lifts, while a rotational lift and the circular footwork were a level three. However, the diagonal step sequence and the last straight line lift were a level two, and the combination spin merited a level one only.

The Russians remained well below their personal best with a score of 86.40 points and scored 146.84 points overall.

“It was hard to skate here after the World Championships and we didn’t really prepare much for this competition,” commented Ilinykh. “Plus we had the time change and were a little sleepy. We skated more like in an exhibition.”

Katsalapov didn’t completely agree: “I felt actually very well. Today, somehow our feelings didn’t come together in the program. She said that we didn’t really prepare for this event, but this wasn’t important, because we are basically in good shape. We skated very well in practice and I didn’t have to encourage Lena, because she did everything. Today it wasn’t our goal to outdo ourselves. It wasn’t our best skate today, but we are still pleased that it is the end of the season.”

Cathy Reed and Chris Reed remained in sixth place at 119.55 points. They appeared cautious in their Oriental dance and she wobbled in the twizzles and the combination spin.

“I’m really sad that I couldn’t show good performances all this season,” lamented Cathy, “but the fans are so warm and always very supportive.”

“I feel that this season was pure bad luck,” added Chris. “Next season we would like to stay healthy and show our strength.”