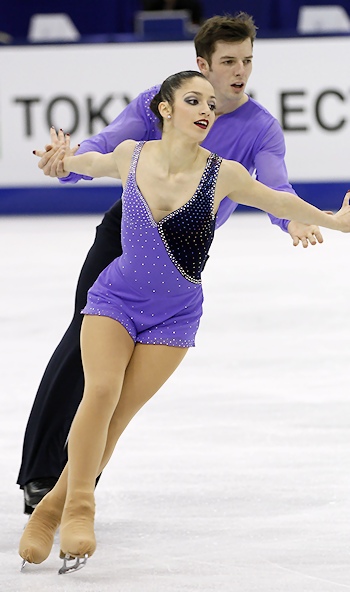 Stefania Berton and Ondrej Hotarek of Italy perform to Albinoni's "Adagio in G minor" at the 2012 World Figure Skating Championships.

Stefania Berton and Ondrej Hotarek drew attention this season by winning the first ever Grand Prix medal for an Italian pair skating team at the 2011 Cup of Russia. They also came close to the podium at the European Figure Skating Championships in the past two years, finishing fourth and fifth, respectively.

The bronze medal from Cup of Russia was a big motivation for the team.

“This is really, really important,” Hotarek, 28, stressed. “The medal means a lot to us and shows why we started skating together. It gives us confidence and is an encouragement that we can do more. We received appreciation from the judges and from the people. Everybody gave great response to our programs and to the way we skate.”

While the pair was happy with the first half of the season, Berton, 21, felt that they could have skated better at the European and World Championships.

“Our season started well, but at the end of the year we were lacking a little,” she said. “We would have liked to go back to Detroit (to work with Jason Dungjen and choreographers Angelika Krylova and Pasquale Camerlengo) before Europeans, but we couldn’t afford it financially.”

However, the team now receives more financial support and plans to spend more time training in the USA.

In Italy, they continue to train with Franca Bianconi.

“Since January, we both are members of the Italian police, like Carolina Kostner for example, and we get a salary,” Berton revealed.

“Our vacation we take in June and July as usual,” she added.

The Italians – the Czech-born Hotarek was naturalized as an Italian citizen in September 2010 – were very happy with the work of Krylova and Camerlengo, and therefore have decided to go back. They picked the dance coaches because they wanted to bring a touch of ice dance into pair skating. Both skaters are tall and make an elegant, good looking couple on the ice.

“We are trying to use everything that makes us different to our advantage,” explained Hotarek. “Granted we can’t make a triple twist five meters up into the air, but I think we can make the difference in the feeling between each other and skating more like ice dancing.”

Although the Italian Champions felt their programs this year were a success, there is no doubt that they want to change them for next season.

“We are always looking for a challenge,” said Berton, who thinks it would be too boring to keep the programs for another season.

“We are thinking about where we can go next and where we can improve,” added Hotarek. “What kind of surprising things we can bring in next year.”

The focus on choreography and programs is especially important to the pair. They take pride in the fact that even ice dancers approved of their short program step sequence.

“We really want to bring more emotions and dance, because that is our strength,” Berton explained, chuckling at the fact that there is nothing they could do about their eight-inch height difference. “We just need to use it to our advantage.”

The team improved technically as well, and added the triple twist and more difficult lifts to their repertoire.

“The throws are getting stronger and we are more together through all the patterns,” Berton pointed out. “We’ve only been skating together for two and a half seasons, and I have never done pairs before. I was not used to having someone with me on the ice, but right now I appreciate it a lot.”

Berton was not only a successful single skater, but also has ice dance experience.

“I did dance when I was eleven years old. I still need to try men’s singles,” she offered, laughing. “The funny thing is that I never thought about pairs in my life. I thought if I’m going to switch from single skating it would be to ice dancing, but then I was already 18 years old when I thought my singles career was done. Of course you cannot start ice dancing at 18. I probably would have continued to study.”

Then she got a call from Hotarek.

“I never thought I would do pairs,” Berton admitted. “To me it looked so dangerous that I didn’t think I’d ever put myself in such a danger.”

However, Berton trusted Hotarek enough to try pair skating with him as she had seen him skate with his former partner Laura Magitteri, and felt safe with him right from the start.

“I could rely on him when something went wrong in a lift or an element,” said Berton. “He made me change my mind because I saw pair skating wasn’t that scary. I was scared like hell for two years doing lifts and twist, but now it’s better. Much better. Now I really enjoy it because I have more confidence in myself. I must say he was the reason why (I did pairs).”

When Hotarek and Magitteri split, Hotarek had to make a decision about his future. He pondered his options and then decided to call Berton.

“I was always pretty strong in the jumps,” he said. “This was the main reason why I was searching for a girl with two really secure triple jumps. In Italy, there was only Stefania who was really the type of skater I could ask to do a try-out. The pair stuff, in time, everybody can learn and I knew that. So I asked her.”

He never regretted it.

Hotarek feels that Berton was the right choice, and not only because of her ability to land throws and jumps.

“She brought so much into the pair with her presence and with the way she acts on the ice,” said Hotarek. “It made the bigger difference than the fact that she can jump. It was really like something that I wasn’t expecting so much.”

“The times have changed,” Berton continued. “I think that the future of the sport is more about equal partners. It’s not about the biggest guy and the smallest girl. It is more about two athletes and two people on the ice.”

“She has a normal body,” Berton further explained. “You wouldn’t really say, ‘Oh, this is definitely a gymnast or a small figure skater’. We just want to show that we are average people, and with a lot of work you can achieve something.”

“I would say different!” she stressed. “We want to say the same thing but in a different way. Sometimes we fight about that.”

However, there are no serious fights as the skaters are getting along very well. They are friends, but they are not dating and spending their free time together.

“We like to spend our time away from each other,” said Berton. “Actually, I love to spend time with my family that I don’t see that much. My little brother is my love. My mother and father really appreciate it when we spend time together.”

She lives with her mother and brother in Milan where her father also resides. In her spare time, Berton enjoys going out dancing and visiting her friends.

“I love Latin dances and ballroom dance,” she revealed.

Hotarek, on the other hand, is rarely seen outside the ice rink as he teaches skating quite a bit.

“I even teach one little pair team,” he said. “There are not so many people who can teach pair skating technically in Milan. I have a few other students and like teaching some adult skaters, which is fun.”

As Hotarek lives alone, he also takes care of his apartment and cooks for himself.

“I actually enjoy cooking,” he said. “Italian food, Czech food. I have a lot of cooking books and I watch the cooking shows.”

Berton confirms that he is a good cook.

While Hotarek is pretty sure that he’ll go into coaching one day, Berton is still undecided.

“There are a lot of things I’d like to do, first of all studying,” she offered. “I’m not sure yet what, but I love acting. I would love to try acting and probably study psychology because it is one of my passions, too. That’s not a plan but that’s what I would like to do.”

Hotarek moved from the Czech Republic to Italy in 2005 when he was partnered with Magitteri. Receiving Italian citizenship was an important step for him.

“Going to Italy changed my skating life,” he said. “I did all my accomplishments in Italy and I think going to the Olympics is something that not only I deserve, but also Italy deserves. Italy gave a lot to me and I am happy to skate for Italy.”

Hotarek came without knowing the Italian language, but picked it up fast by watching TV and listening to the people around him. Berton has only praise for him.

“He speaks really good Italian,” she said. “People sometimes don’t notice that he is not originally from Italy.”

Together, they are a new force in pair skating and could become the first Italian pair skating team ever to win a medal at an ISU Championship.