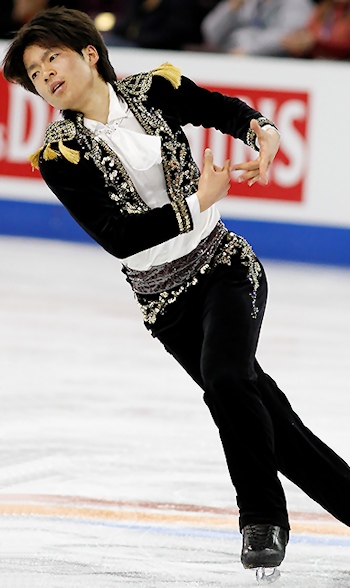 Tatsuki Machida is part of the strong Japanese men’s figure skating team, and has found many fans thanks to his artistic skating style.

The 22-year-old hasn’t made it to Worlds yet, but he has a silver medal from the 2010 Four Continents Championships and was ranked fourth at 2010 and 2012 Japanese Nationals. This season, he came back to the Four Continents and finished seventh.

“My highlights of the season were the Golden Spin of Zagreb and nationals,” said Machida. “I skated well there, but I had some problems with the quad toe. The quad toe was better at Four Continents. I hope this will give me momentum for the next season.”

Machida suffered an ankle injury in practice at Nebelhorn Trophy last September, and had to withdraw from the event. It was especially sad as Stéphane Lambiel, who had choreographed his long program to Don Quixote, was in Oberstdorf and hoped to see the first performance in competition. The young Japanese skater was one of the first international top skaters to work with Lambiel.

“I was nervous to work with him, but he was really nice and it was a lot of fun,” Machida shared. “He gave me a lot of new things that I hadn’t done before and he contributed a lot to my development.”

“I was very proud of him,” said the two-time World Champion from Switzerland. “I was able to see progress with each performance. He really understood what I wanted to bring across. Whenever I told him something, he understood right away what I wanted. Working with him was one of the best experiences last summer.”

“This was a piece that I had always wanted to use for myself, but I realized it was  music for younger skaters,” Lambiel explained. “To me, the music of Don Quixote is very young, fresh, and dynamic.”

“Machida is a  young man with punch,” he continued. “Unfortunately, I felt like my time for this music had passed, but when I discussed the music with Tatsuki, I felt that he would be a great Don Quixote – young, with a pure soul. I knew it was the right music for him.”

The experience was so positive that Lambiel and Machida decided to continue their collaboration this year. Beginning  July 1, they plan to work on a new short program for the Japanese skater in Switzerland.

“I’ll make a new short program with Stéphane,” confirmed Machida. “I believe that we can make a wonderful one. The short program music is a new genre to me. I’m sure that Stéphane and I can produce a new style and expression.”

Details for the long program are currently mum.

Machida began preparations for next season after a small break following the  2012 ISU Four Continents Figure Skating Championships in February.

“Everything is going very well,” said the 2007 Japanese Junior national champion. “I’m trying to get good quality jumps, and they are by far better than before.”

The spins, on the other hand, will be another matter altogether.

“The rules for the spins have changed,” Machida explained. “It will be hard for me to get good levels on them. That’s a big problem for me because I’m not so good at spins. I have to work hard especially on them, but to me the quality is more important than the level.”

Machida has enjoyed participating in the “Dreams on Ice” show in Japan this week, and plans to return soon to  his training base in Lake Arrowhead where he mostly works with Anthony Liu.

“I was not able to get enough ice time in Japan,” Machida explained, referring to his move to the US last year. “Five years ago I went to a summer camp at Ice Castle, therefore I knew Anthony. I respect him a lot. He is like a father and brother to me, and as a skater he is very complex.”

The Japanese adapted to his new environment quickly and his English improved very fast.

“Lake Arrowhead is in the countryside and a little boring, but you can fully focus on skating and I have many friends there now,” Machida noted, but admitted that he is more of a “city boy” as he hails from Hiroshima.

In Lake Arrowhead, Machida enjoys the company of other top skaters such as Denis Ten of Kazakhstan, but he does miss his family. He was happy to return home until mid May for vacation as well as some training.

Machida has a sister, four years younger, that briefly tried figure skating. He himself started out as a three-year-old as there was an ice rink near his home.

“My first memory of skating is about my first competition when I was four or five years old,” he recalled, laughing. “I fell on a spiral move and I finished last.”

Fortunately this setback didn’t prevent him from continuing his career.

“I get so nervous in competition that I lack in  consistency,” he explained. “Anthony (Liu) says, ‘you need to enjoy competing more'”.

When asked  how he he would describe himself, Machida paused for a  moment before saying,  “Nobody has ever asked me about that. I think I am quiet and shy, but I am different on the ice. I like to show emotions to the audience, but overall I’m an average person.”

While  Machida is currently a full-time athlete, he plans to continue his studies in  literature in the future.

“I really like reading, especially mystery,” he revealed. “If I wasn’t a skater, maybe I would like to be a writer, but I started skating when I was three years old and I cannot really imagine doing something else. Figure skating is my life right now, and in the future I definitely want to do something with skating.”

After his competitive career, he would like to skate in shows and later work as a coach.

“I want to teach young skaters so they can become better skaters than I was myself,” Machida offered.

For the upcoming season, Machida has been assigned to two Grand Prix events, Skate America and Cup of China.

“I was so surprised to hear it,” he said. “I’m given a chance, so I’ll work so hard to give my best performances in the Grand Prix competitions.”

Machida is also thinking of taking part in an international competition before Skate America, but hasn’t decided yet which one. His goals for the season are clear:

“I would like to give my best in every competition,” he summed up. “I’ll try hard to get medals in the Grand Prix and my goal is going to Worlds. I really want to perform there, and I want to improve my expression for next season.”