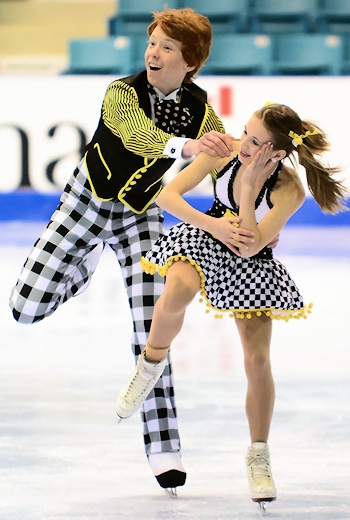 Ontario’s Lauren Collins and Danny Seymour captured the novice ice dance title at the 2012 Canadian Figure Skating Championships in Moncton, N.B. After finishing in eighth place in 2011, the teenagers were excited to take the top step on the podium.

“At first we were in shock,” Collins admitted. “We were so proud of ourselves and we thought, ‘Wow, all our hard work has paid off.’ It was a fantastic feeling and something we will always remember.”

What makes their victory even more impressive is that Collins, 16, and Seymour, 18, finished in fifth place at the Skate Canada Challenge in Regina, Sask., the month before nationals.

“We worked so hard between Challenge and nationals,” Seymour explained. “We really focused on our strength and speed, as well as our expression.”

“They mentored us throughout,” said Seymour. “It was really a group effort between our coaching team and us.”

Collins and Seymour train in Barrie, Ont., at the Mariposa School of Skating, and have a support team of skating professionals who ensure that all facets of their skating is covered.

The duo enjoys the training in Barrie, citing the positive attitude at the rink as part of their success.

“What we like at Mariposa is that the environment encourages good work habits and striving to be the best you can be,” Seymour explained. “The camaraderie and respect for each other on the team makes it an easy place to train and as a skater you feel supported.”

“It usually takes me about two minutes,” Seymour said of his commute to the rink. “Throughout the winter we train at other arenas as well, but usually it takes no more than 10 minutes. My school is just a walk across the parking lot so that makes it easy.”

The gold medalists have two unique training schedules—one that they follow during the school year, and another during the summer.

“Throughout the school year we train on the ice for about three hrs a day,” Collins said. “Two hours is usually allocated to programs and one hour towards elements—of course that is flexible depending on the expectation.”

“It’s a little more demanding since we don’t have school classes to attend,” Seymour elaborated, regarding the more intense summer training schedule. “Our schedule usually looks like three to four hours of on-ice training, five days a week. We do two run-throughs a day. Two hours are usually dedicated to the elements and components of our programs, and we also have group lessons.”

The 2012-13 season will bring a new challenge as the duo has decided to move up to the junior level.

“We are excited to be moving up,” Collins admitted. “This will be a new experience for us. We are striving to improve our strength while keeping stride with the elegance, musicality, and dance quality of our new programs.”

As novice champions, Collins and Seymour hope to begin their climb up the international ladder by being selected to compete in the Junior Grand Prix circuit this fall.

“We have not been selected as of yet,” Seymour said. “We would be very excited for this new experience should we be selected. It would be a great opportunity.”

One of the challenges that Collins and Seymour will face in their first year on the junior level is the addition of the short dance to their competitive regiment. The team has selected a combination of blues and swing using a piece from the movie Swing Kids.

They will use music from the 2011 film Midnight in Paris for their inaugural junior free dance.

“We thought it would be a good next step for us,” Seymour said. “The music pieces complement both of our personalities and push us to strive for the next level.

“The programs and choreography have been completed now and we are at the point of practice, practice and more practice,” added Collins. “We are beginning to be more comfortable with the new choreography and we are now making it our own. We have recently begun to do run-throughs and building our stamina through each program.”

The team will make their season’s debut at the Lake Place Ice Dance Championships at the end of the month, and will compete again the following week at the Minto Summer Skate. They will close out the summer season at the Thornhill Summer Skate in the middle of August.

“Our training schedules are pretty busy this summer, and since neither of us has been to Lake Placid, the trip will serve two purpose,” said Collins. “To compete and for vacation and family time.”

In terms of goals for the season, Collins and Seymour see the sky as the limit.

“Our goals for this season are to place in the top ten at nationals,” Collins said. “We’d like to have good health and be injury free. Beyond that, we’d love to be considered for junior worlds. The possibilities are endless.”

Collins enjoys biking, camping, downhill skiing, and hanging out with friends. She will be a grade 12 student this fall at a French catholic school not far from the rink.

“I am able to attend classes in the afternoon and I also do a couple of courses on line because I want to graduate with my school friends,” she said. “Both the principal and vice principal at my school have been very supportive and have helped with giving me options and being flexible with my schedule.”

Collins lives at home with her family in Minesing, Ont., and has a younger sister who also figure skates.

Like his partner, Seymour is also a grade 12 student, and plans to finish up this year.

“I attend a traditional public high school that is right next door to the arena,” he said. “They are flexible to my skating schedule.”

Seymour enjoys playing golf, as well as doing anything that has to do with music. He lives apart from his family in order to train with Collins.

“My family is in Port Elgin, but I have been living in Barrie for the last three years so I can train at Mariposa,” he explained. “My family has been extremely supportive and they come to all my events to cheer us on. I have a younger brother and he is also involved in sports. He is a musician (drummer) and he likes to ski and play tennis.”