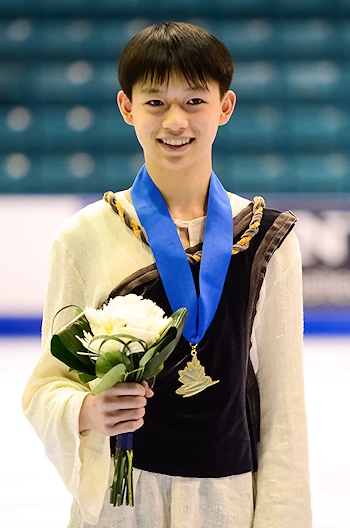 Anthony Kan of Central Ontario has quickly put the thrill of last season behind and has turned his attention to his debut as a junior man.

In December, Ontario’s Anthony Kan emerged from a crowd of up and comers at the Skate Canada Challenge in Regina, Sask. to place fourth. The following month, he charmed the audience with his mature presentation and enchanting programs to snatch the 2012 Canadian novice men’s title in Moncton, N.B.

“Before the long program, I remembered thinking to myself, ‘I want Roman to skate well, because I want to try and skate better,'” said Kan, regarding nationals.

“To hear the scores come up after I skated was like I had achieved what I came to do,” the teenager from Richmond Hill recalled. “I was speechless for the first five seconds with my heart racing faster than it had ever beaten before. I could only smile. Now, I look to uphold my title at the junior level and I see my novice championship as only the first step to my success as a figure skater.”

Kan has quickly put the thrill of last season behind and has turned his attention to his debut as a junior man.

“Training has been relatively the same—maybe a little tougher,” said the gold medalist. “I train five or six days a week, about three to five hours a day. This includes on and off-ice training, as well as additional workout time.”

Like most skaters, Kan’s off-ice training is enough to leave the average person exhausted.

“My off-ice training consists of a combination of a dry land jumping, Pilates, Zumba, ballet, yoga, skipping, and occasionally other dancing,” the 16-year-old explained. “My workout sessions consist of running on the track, weight machines, aerobic exercises, beam exercises, and jumping over hurdles.”

Kan trains in his hometown with two-time Canadian ladies champion Tracey Wainman and 1989 Worlds bronze medalist Grzegorz Filipowski, who represented Poland in three Winter Olympic Games. Both coaches have been with Kan from the beginning of his skating career.

“Tracey is my main coach,” Kan explained. “She has looked after me since I was six and trains most of my free skating. Grzegorz is my secondary coach, and he works on my jumps, spins and choreography.”

Kan lists three others as members of his support team, looking to these specialists to supplement his training.

“Eva Najarro is my stroking coach, and Galina Lachter is my additional spins coach,” he said. “Val Grose is my workout trainer, who trains me at the Toronto Track and Field Centre at York.”

With the necessary tests behind him, Kan has been focusing much of his time on the ice on improving the quality and difficulty of his skating.

“I have been attempting to work on the landings of my jumps to improve my posture and arm position to present my jumps in the best way possible,” he said. “I am also working on applying better posture to my stoking during the end of my programs by working more with (Najarro) in my stroking lessons.”

Kan is experiencing the off-season ‘get used to my skates’ syndrome, all the while trying to polish some of his most difficult elements.

“I’ve been trying to improve the quality of my triple Lutz-triple toe (loop) combination, as well as my triple loop,” he shared. “I have been adjusting to my new skates and trying to reclaim the finesse in my spins on the new blades.”

The novice champion has elected to keep both of his programs from last season—The Cook, the Thief, His Wife, and Her Lover for the short program and Jesus Christ Superstar for the free skate. He hopes the success of these programs last season will help him to get selected for a Junior Grand Prix assignment this fall.

“I do have triple-triple combos and a triple flip,” Kan said. “Whether or not I have the amount of benchmark points to be assigned to the Junior Grand Prix is yet to be determined as I have not competed at the junior level yet.”

Kan will compete at Skate Detroit later this month, at the Summer Sizzle competition next month in Waterloo, and a week later in Thornhill at the Figure Skating Boutique Summer Skate.

Long term, Kan would like to compete at the Junior World Championships and become a member of Team Canada.

Kan will be a Grade 12 student at St. Robert Catholic High School later this year, where he maintains a 90 percent average. He has balanced a full day at school with skating his entire career, and doesn’t mind the hectic pace.

“I go to school from 8:00 A.M. to 2:30 P.M., then take a bus to the rink,” he explained. “I skate from 3:00 until sometime at night. I try to finish my homework in class, and if I don’t, I just get it done after skating. School and skating just seem to live harmoniously in my life. I don’t really have to think about it. I’ve lived and breathed both my whole life.”

Kan, who is of Cantonese descent, lives at home with his mother and younger brother.

Perhaps through his volunteer experience, Kan has become interested in the medical field.

“I have always been interested in medical science,” he admitted. “I have been working to maintain my marks in the sciences to get into a good university. I would like to see myself as a specialized doctor, physiotherapist, or sports medicine specialist.”

Outside of skating, Kan likes hanging out with friends, going to the movies, playing laser tag, and showering his two pet rabbits with attention.

“I am also extremely passionate about my music,” he added. “I listen to a lot of Adele, Avril Lavigne and other mainstream pop and some other alternative music.”

Kan also spends a fair bit of time in front of the TV enjoying some of his favorite programs.

“I watched Sanctuary until they cut the fifth season,” he said. “I watch a lot of Family channel and MuchMusic, as well as Dance Moms. ”

It is a quote from Dance Moms that has inspired Kan as he approaches the season.

“It’s easy to get to the top of the pyramid, but it’s harder to stay there,” Kan said. “Abby Lee Miller had once said this on Dance Moms, and I think it suits this situation rather well. I may have become the novice men’s national champion, but I need to work harder to get into the Junior Grand Prix and become the junior men’s champion.”