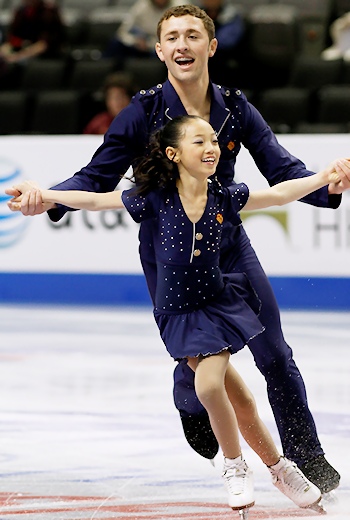 When Chelsea Liu and Devin Perini captured the 2012 U.S. novice pairs title in San Jose this past January, it was not a huge surprise. The young duo, just 12 and 19 respectively, were the reigning silver medalists at the time. Now in their third season together, Liu and Perini have shifted their focus to the junior level, and are preparing to qualify for the 2013 U.S. Championships in Omaha, Neb.

“Winning the title is still in the back of my mind, but it’s in the past,” Perini said. “We’re competing up a level this season with new teams, and we have to look forward. For me, it’s a milestone that is in the past.”

Liu uses the win as a source of inspiration, and has grown confident with the addition to her trophy case.

“It felt good to win, and it brought a lot of confidence to me,” she said. “Now I know that I am strong enough to hold up to the pressure, and I am not afraid to skate on the junior level.”

Liu and Perini teamed up together two years ago—Perini was looking for a new partner after his previous partnership came to an end. Liu was returning to southern California after a stint in Colorado. Coaches Jenni Meno and Todd Sand brought the two together for a tryout.

“I still was quite interested in pairs and Todd and Jenni were looking to see who was out there,” Perini recalled. “They came across Chelsea who had pairs experience, and they paired us up. We started skating together, and things kind of just took off.”

Liu was training in Colorado Springs with Dalilah Sappenfield and Larry Ibarra, and followed her sister, international competitor Chaochih Liu, back to the family home in Irvine.

“My sister started working with (John) Nicks and really liked it,” she said. “She moved back to California a couple of months before we did.”

Despite the seven-year age gap, Liu and Perini have a solid relationship based on respect and friendship.

“Even though she is only 12, she’s very serious on the ice,” Perini said. “Off ice, she’s more of a kid. I understand that, and we try to relax but still take things seriously on the ice.”

Perini believes that Liu’s maturity on the ice is one of the reasons that they have come so far so early in their partnership.

The way that we work together is probably the most important thing in our success so far,” Perini admitted. “We work really hard together, and are on the same page in terms of our skating. When we are working on our elements, we just come together relatively quickly—if one person is doing something one way, the other quickly compensates to balance it out.”

Liu added that persistence and a little humor help things along as well.

“We joke around a lot, so things don’t get too serious,” she said. “When we try new things on the ice, we don’t give up if they don’t work.”

Now as they enter their freshman year on the junior level, Liu and Perini understand that the game has changed. They have dedicated the off-season to growing their technical elements and attempting to develop their overall skating skills.

“We are definitely trying harder elements with the knowledge that we are going to be competing with teams who have more experience at the junior level,” Perini explained. “Our main goal this season is to improve our skating skills. Of course it is always nice to place well, but as a first year junior team, we don’t feel the pressure from last year’s win. We’re trying to slowly grow and become a better pairs team as a whole.”

To ease the transition, Liu and Perini have adapted their novice free skate from last season to the junior requirements, and have prepared a new short program to The Dueling Banjos, choreographed by Sand and Christine Binder.

“We figured that since so much is changing for us this season, that keeping the long program from last season and getting a new short would be easier for us,” Perini said. “Our long program is to the music of Charlie Chaplin and it’s something that we are very comfortable with. Our goal is to really improve our presentation in this program.”

Liu and Perini have planned for increased technical content in their programs this season, and are working hard to include all of their new elements come Omaha.

“We’re working on the throw triples, (side by side) double Axels, and the triple twist,” Liu said. “They are pretty strong already.”

Perini added, “Level four with plus threes is everyone’s dream. We’ve tried the throw triple Salchow in competition a couple times already, and we’re trying to get the courage to be able to land it consistently. We did our first triple twist in competition at Skate Detroit, and we got a level three, which is really good for our first time. We’re taking each competition one by one, and are our goal is to land all of our new elements by nationals.”

Liu and Perini have worked with Meno and Sand since the beginning of the partnership, and appreciate the wealth of knowledge that the three-time World Championship medalists bring to the table.

“Todd is always pushing us to hold our positions, to keep our shoulders back, and to get into our knees more,” said Perini. “It’s definitely one of the strong points that they had during their career, and it something that they have pushed into all of their skaters. Jenni keeps us on track with the positive and productive environment that she creates, and it enables us to strive to be the greatest at everything we do.”

Since Liu does not meet minimum age requirements, an invitation to compete on the Junior Grand Prix will have to wait another year, however, the duo currently has the third highest summer competition score among American junior pairs teams.

“It just gives us more time to develop our skating before we compete internationally,” Perini said. “Of course, we would like to compete on the Junior Grand Prix, but we know that we have to wait, and we are working hard this year so that we have the chance to have the opportunity next year.”

Perini is from Thousand Oaks, Calif., and graduated from high school in the spring of 2011. He is currently taking classes at Saddleback College in Mission Viejo.

“Being a college graduate is a definite goal of mine,” he said. “One of the rules that I have with my parents is that I do school and keep my grades up so that I can keep skating. After I finish (at Saddleback), I want to transfer to a four year school so that I can get a degree, though I’m not really sure what that degree will be in.”

Outside of skating and school, Perini works part time at a tanning salon, and also works at his father’s company as time permits. The college student also likes doing things outdoors.

“I love being outdoors—going to the beach, riding my bike, surfing, skate boarding—anything that my coaches don’t want me to do,” he said with a laugh.

Perini has two brothers—older brother Dustin, who is an ice dancer, and a younger brother Dillin who wants nothing to do with skating.

“He supports us and all, but he has no desire to get involved,” he said. “He’s is very handy—he can build anything. Right now he is building a wall in my dad’s garage, and just told me about how he broke the water heater and had water all over the floor. He definitely likes to fix things.”

Liu will be a seventh \grader this fall, and is planning to enter an independent study program that will allow her to attend school part time. She enjoys gymnastics, singing, and acting.

In addition to her older sister, she also has a younger sister named Cheyenne, who is eight years old.

Liu and Perini will next compete at the 2012 Southern California Inter-Club Association Invitational Series Final at the end of September in Paramount, Calif.