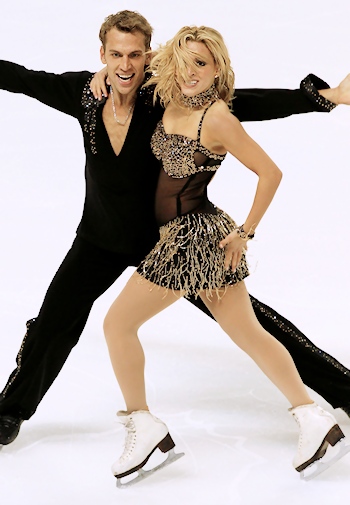 Ice dancers Isabella Tobias and Deividas Stagniunas of Lithuania are striving for a good season this year, and are currently scheduled to compete at 2012 Skate America in October.

The team followed up with a fifth-place finish at the Cup of Russia 2011. They were third alternates for the Grand Prix Final, a big success for having just teamed up in the spring of 2010.

The ice dancers went on to crack the top ten at the ISU European Figure Skating Championships in January, coming in ninth, however, the season did have its ups and downs for the Michigan-based couple.

“Last season for us was bittersweet,” said Tobias. “We had some incredible highs in skating, with our bronze medal at Skate America and with our great results at Europeans, but we also had terrible lows in our personal lives with deaths happening in both of our families and my sprained ankle three weeks before Worlds.”

“It was a struggle for us to remain positive, but we stood by each other and did the best we could,” she added. “I believe last season ultimately made us stronger and changed our approach to life; it made us grow an incredible bond.”

At Worlds in Nice, the American-Lithuanian team finished 18th, four places lower than they had in their remarkable debut in 2011. However, now that the new season lies ahead, Tobias and Stagniunas are getting ready to challenge again.

The were part of the famous dance stable of Marina Zueva and Igor Shpilband in Canton, Mich. and naturally were affected by the split of the coaches that happened while they were on vacation. The dancers weighed their options and decided to go with Shpilband to Novi, Mich.

“We honestly just felt that Igor would be able to provide more of what we needed as a team,” commented Tobias. “Igor and Marina’s split was just devastating for everyone though, especially the skaters. We miss everyone at Canton every day.”

Stagniunas still has ties to Canton as he teaches there.

Meanwhile, the skaters have adapted to their new training environment and enjoy the company of Madison Chock and Evan Bates, Ekaterina Riazanova and Ilia Tkachenko, and Anna Cappellini and Luca Lanotte. Tanja Kolbe and Stefano Caruso have also joined them for a couple of weeks.

“Training is going extremely well in Novi,” said Tobias. “Both Deividas and I relocated here to be closer to the rink. It’s a very international rink.”

Together with Shpilband and Marina Klimova, the ice dancers picked selections from the musical Oklahoma for the short dance and selections from Sergei Rachmaninov’s powerful Piano Concerto No 2 for the free dance.

“We chose our short dance because we thought the characters would be very fun to interpret,” Tobias explained. “For our free dance we wanted to provide a contrast to our short dance and do something more serious and classical.”

“Preparations for next season are going very well,” Tobias said. “We are working extremely hard, harder than we have ever worked before. I think we will surprise everyone with the depth of our free dance; the music is very powerful and moving, and we have to skate in a way to do it justice.”

The new free dance is quite a departure from last season’s entertaining and crowd-pleasing Rock’n’Roll program, and should highlight the versatility of this dance team.

Tobias and Stagniunas are an interesting couple, full of contrasts, starting with their background and personalities. Tobias, who just turned 21 on August 23, was born and raised in New York. She took up skating, inspired by Tara Lipinski.

When she was 8, Tobias took up ballet at the renowned School of American Ballet to help her skating, but soon discovered her talent for dance.

“I really grew to love it, just performing and doing all the different roles and different characters,” Tobias shared. “The classic ballets, I did Nutcracker and Swan Lake and it’s just beautiful. I really loved both equally.”

Ultimately, however, she had to choose between the two sports.

“Just when it got serious, it was too much time to be able to do both and school full time,” Tobias explained. “So I chose ballet, but three years later I realized after watching the Torino Olympics that I really wanted to be an ice dancer. I felt that this was more suited to me than ballet, so I started again. The system changed in those three years, so I had to get used to that. I didn’t know the new system really well. Other than that, it took me only a week to get back to where I had been.”

As a single skater, Tobias trained under Ari Zakarian, then under Alexander Zhulin, and in the last year before her break, under Judy Blumberg. When she returned to skating, she was first coached by Evgeni Platov. There, she first teamed up with Otar Japaridze and competed for Georgia, finishing 14th at the 2008 ISU World Junior Figure Skating Championships.

Stagniunas, 27, was born and raised in Kaunas, Lithuania. He began skating when he was five, following his cousin into the sport.

“I told my mom I wanted to do the same thing like my cousin, so she took me there and I skating with him,” recalled Stagniunas. “He broke his hand and stopped, but I still continued till this day.”

“I chose ice dance because it seems easy,” said Stagniunas, “but it is not, really. I actually enjoyed it more than I would have enjoyed singles, because I have somebody to skate with and to talk to during the performance.”

Dance partners in Lithuania were hard to find, so the tall Stagniunas had to look beyond and moved to the USA. He competed with Kayla Nicole Frey from 2004 to 2006, then with Katherine Copely from 2007 until fall 2009 when an injury forced Copely into retirement. At that time, Tobias started coming to Michigan.

“I was not there full time at first,” remembered Tobias. “I’d kind of be there one week and then not there another week, but in April that year (2010), I started living full time in Michigan.”

“In May, we had our first try out and it went great,” said Tobias. “Our personalities really complemented each other. It’s true, I’m very type A and he is very type B, so we kind of balance each other out.”

Tobias is the lively, bubbly type, while Stagniunas is the quiet and reflective type, but with a lot of dry humor.

“My personality is a little bit more extreme,” Tobias pointed out. “I’m either really, really hyper or sometimes not. I’m just kind of more fireworks and he is just very calm, steady and secure. He is my rock. He keeps me where I need to be.”

Tobias describes her partner as “Funny, steady. He is like my big brother, making fun of everything I say. And good.”

When asked what the partner would take to an isolated island, both do not have to think for long.

“His ipad, headphones, and probably a baseball cap,” Tobias listed.

“To an island? I would take food or something,” Stagniunas disagreed.

“That’s such a boring answer,” Tobias bantered back. “You would take a banana? That’s not a good answer.”

“She would take her dogs probably,” responded Stagniunas, “then she would take the fattest book on earth that she could read, and probably a toothbrush so she could clean her teeth.”

“It helps to encourage each other and just to say, ‘we got this’,” Tobias noted.

“An encouragement could be something like ‘We’re almost done!’,” added Stagniunas.

“We actually do say ‘we are almost done’,” his  partner confirmed, laughing. “If you watch you maybe can see it. It’s a true partnership. We have to support each other. It’s so difficult to do this already. We can take all the help we can get from each other.”

Both ice dancers look up to the icons of Lithuanian figure skating, World and European medallists and five-time Olympians Margarita Drobiazko and Povilas Vanagas. Stagniunas said that he was influenced a lot by them when he started out.

“They were my favorite team,” said the 27-year-old. “They should have been everywhere higher. They are really good skaters and I like them.”

Tobias was impressed when Drobiazko and Vanagas came to watch the Cup of Russia in Moscow.

“I didn’t know they were coming,” she said. “When we finished our short dance, I saw Deividas waving to somebody in the audience and you can actually see on the video the shock on my face when I saw that it was them. They were there and it was amazing.”

Stagniunas added that Drobiazko and Vanagas later came backstage to talk to them.

Naturally, Tobias and Stagniunas are hoping to be able to represent Lithuania at the 2014 Olympic Games, for which Tobias needs Lithuanian citizenship.

“We are working on it,” confirmed Stagniunas.

“I’m confident we won’t have a problem getting the passport,” added Tobias. “I’m so lucky and proud to skate for Lithuania. They’ve been extremely supportive and the messages I received from the people there are so kind.”

“I think we are their top winter sports people,” stressed Stagniunas, regarding Lithuania’s athletes. “When I was with Katy, there were envelopes. We were in envelope A, and others were in envelope B. We took only eight athletes to the Winter Olympics, so we are probably one of the highest (ranked athletes).”

Meanwhile, Tobias is studying Lithuanian. “I’m learning and taking lessons. I learned some basic greetings, ‘hi’, ‘how are you’, ‘thank you’. I’m trying. It’s a little difficult, but I’m slowly starting to understand more and more. Hopefully I can acquire a pretty good knowledge of the language by Sochi,” the 21-year-old said.

Spare time is, as for all high-level athletes, limited.

“I don’t like to do anything,” said Stagniunas. “I just like to hang out with my friends and girlfriend and relax.”

“I love all books,” said Tobias, who enjoys reading in her spare time. “I do love Fantasy, but honestly any kind of good book.”

“They come in different sizes and colors and names,” she laughed, regarding the dogs. “They live with my parents in New York, but I go home a lot to be with my family. Family is important to both of us. Deividas’ family is in Chicago. It is very fortunate that our families are close to us and we can spend time with them.”

While Stagniunas has put his studies on hold for the time being, Tobias attended Columbia University and now attends Harvard University Extension School online. She is majoring in English.

“I want to be a high school English teacher,,” Tobias stated. “English is a subject I am very passionate about, and I believe a passionate teacher can really transform a class.”

Tobias and Stagniunas are scheduled for one Grand Prix this season at Skate America, but will first start their season at Nebelhorn Trophy at the end of September.

“Our goals for next season are to skate the best we can, but most importantly, to enjoy ourselves while we are doing it,” said Tobias. “Life is too short and skating is too hard if it doesn’t make you happy.”

“And qualifying for the Olympics wouldn’t hurt either,” she concluded.