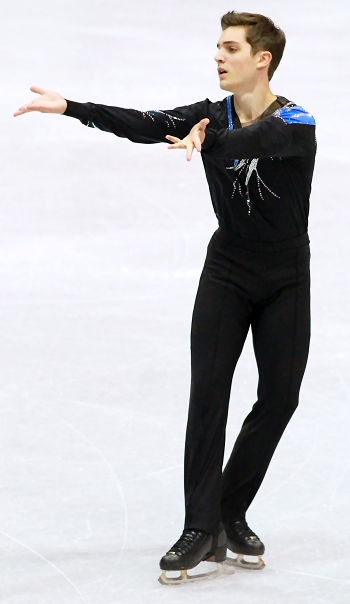 When USA’s Joshua Farris took the ice last month in at the Junior Grand Prix (JGP) in Lake Placid, NY, for his international season debut, he no longer resembled the boy who won the silver medal at the World Junior Figure Skating Championships in March.

Standing at center ice, was a young man who arrived with a quadruple jump in his arsenal and a fire in his belly. Perhaps motivated by his disappointing 16th place finish at the 2012 U.S. National Championships in San Jose, Calif., the 17-year-old is working hard to make a big statement with his skating this season.

“After nationals, I was a little [disappointed] which motivated me to train extremely hard for Junior Worlds,” he said candidly. “Obviously, I got the results I wanted on the ice.”

The teen admits to historically not having a such a great long program after skating a good short.

“At Junior Worlds, I learned that if I take my time that I have time to allow things to happen naturally. I think that if I didn’t have the experience that I did in San Jose, I wouldn’t have been able to learn that about competing.”

Though he fell short of winning the title in Minsk by just under half a point, Farris came away from the event with some great perspective.

“Sometimes it happens that you can medal in an event without really skating your best,” he acknowledged. “I skated the best that I possibly could on that day. I wanted to win, and even though it didn’t happen, it was a great experience because I was able to skate so well. I can’t be disappointed about that.”

After the competition, Farris took a break from skating to recharge in advance of preparations for the 2012-13 season.

“I took about three and half weeks off,” recalled the silver medalist. “I went down to Dallas to see my dad for about a week. I didn’t really take any vacations—I just relaxed and stayed at home.”

It was the longest time that Farris recalled being away from the ice without having an injury that kept him from the daily training grind.

“After a week or a week and a half, I was already to skate again,” said the 2011-12 JGP Final bronze medalist. “When I went back to the rink, I went through all my jumps on the first day and they all worked. Even though I wasn’t skating during my break, I was still very active. I did a lot of mountain biking and some running. ”

“I think that I trained smarter this summer,” he admitted. “I trained as hard as I could without injuring myself. My coaches and I think that this will help in getting the mental toughness side of my skating to match what I can do physically. That part is taking a bit longer for me, but I’m getting there That is something that we definitely worked on.”

Farris also worked to improve the components side of his skating.

“I’ve had some low transition scores, so I have been really trying to incorporate them into my programs,” he said. “In the past, especially last year, I held back on my components so that I could save the energy for my jumps. At Junior Worlds, I think that I finally started to understand, and found that balance that will allow me to give equal attention to both.”

The 2009 US novice champion also aspires to become a better performer.

“I’ve received feedback from judges and officials that I need more passion,” he explained. “That’s probably the main thing that I have been working on the past few months.”

Farris took the comments to heart, and one day decided to see what everyone was seeing for himself.

“I have mirrors on my closet doors, and I went through my programs and realized what everyone was talking about,” he revealed. “I went through every single little detail and tried to make it better.”

This season’s programs reflect the attention to these details, and are a personal reflection of Farris himself. With input from coach Allen, Farris takes an active role in the choreography of his programs.

“Damon and I work together on the choreography,” he said. “This year, I did a lot more than I did in the past. Basically, I laid out the programs and he polished them up. He would see something that didn’t work, and we would figure out together how to fix it. We feed off of each other.”

Encouraged by last year’s short program to Debussy’s Clair de Lune, Farris believes that having a hand in choreography helps him to better interpret his programs.

“It was like the new beginning for me,” Farris described. “I will probably always love that program, and I think that it set me up well to be able to get to the point where I am this season. I definitely feel more passion in my programs this season, but I still have work to do in expressing that passion.”

Farris has selected Suite for Solo Cello No. 1 in G Major: Prelude by Bach for this season’s short program.

“I had heard the music many times before, but when I started to consider it for the short program, I really wanted to create a story with it,” he explained. “I interpret it with a bit of anger. I have some red in my costume, which I asked my costume designer to add, in order to represent the anger in the program.”

His free skate to Rachmaninov’s Piano Concerto No. 2 in C Minor op. 18 III: Allegro Scherzando is, according to Farris, a story about falling in love with a beautiful girl for the first time, and the roller coaster of emotions surrounding that love.

“If I just go out there and let the music flow through me, I think that I will have more success in reaching the audience,” he said. “Once I do that, everything else will come. I do all of the technical elements in practice, and it’s just a matter of relaxing and letting everything flow.”

In Lake Placid—his first international event of the season, Farris showed that all of the hard work that he had put in over the summer had paid off. Not only was he able to win the competition with more than 36 points to spare, Farris landed his first quadruple jump in international competition.

“Hitting the quad was definitely a great moment, but I’ve learned that I definitely matured a lot over the summer,” he said. “When watching the programs on YouTube after the competition, I definitely see a lot of changes. I’m really proud of what I did in Lake Placid. Landing the quad was a big milestone, and I’m so happy that I was able to compete so well.”

Many expected that Farris would make the big leap to the Grand Prix (GP) circuit this season, but it was not meant to be. When weighing the advantages, he and his coaching team decided it best to stick around on the junior circuit for one more year.

“I wanted to skate on the GP, but it looked like I was probably only going to get one assignment,” he revealed. “I’ve seen other skaters who skated in only one event on the Grand Prix and didn’t skate their best, so you’re at a disadvantage the next year.”

“We had a lot of discussion about this—my coaches, US Figure Skating, and I,” he continued. “In the end, we all thought skating on the JGP was the best course of action for this season.”

Farris will compete again at the end of the month in Bled, Slovenia, for the opportunity to clinch a second consecutive spot in the Junior Grand Prix Final. However, he knows that he cannot rest on his laurels if he hopes to achieve that goal.

“I looked at the list to see who I would be competing with, and Han Yan (reigning World Junior champion) and Boyang Jin (2012 JGP Courchevel gold medalist) are scheduled to compete, so I know that the competition will be tough,” he said. “My plan is to have fun and stay relaxed, but at the same time, I plan to perform the same technical content that I did in Lake Placid.”

Farris refuses to look too far in the future, but he is looking forward to competing at the 2013 U.S. Figure Skating Championships in Omaha, Neb., in January.

“The past two nationals have been not great for me,” he admitted. “The first year did not go well because I was not healthy, so that one didn’t really count for me personally,” he said. “The way that I look at it, I see it as only having one bad nationals. It keeps things a bit more positive for me, and I’m really determined heading into this next one.”

Farris also hopes to have the opportunity to improve his results at the World Junior Championships as well.

“I really want to win,” he said. “I want to win Junior Worlds while skating my best. I can’t say anything other than that.”

Farris started his senior year of high school just last week, and is looking forward to finishing up in the spring or early summer.

“I am still home-schooled, but one thing has changed—My mom is an official teacher at a private Catholic school, and she has arranged for a few teachers to work with me,” he explained. “I’m definitely looking forward to graduating. I’ll probably take one or two classes at a community college next fall, but I don’t want to commit to too much because I want to focus on skating for now.”