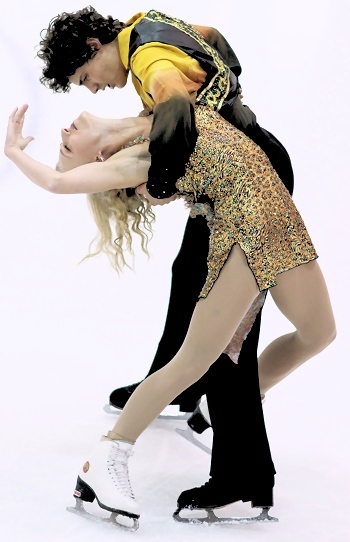 After a solid short dance where they finished in third place, the Canadian bronze medalists took the title with a strong free dance.

“We’re really exited,” Poirier said after the competition. “We really just wanted to go there and get feedback from an international panel so that we could learn what we needed to work on before the Grand Prix.”

“I think that it will sink in a little bit more when we get back home and reevaluate,” he added. “We’ll be able to appreciate what we were able to accomplish.”

It really was an unexpected result as the team had just paired up in July 2011 after a number of splits had just taken place that spring, including that of Poirier himself and partner Vanessa Crone, who were the the reigning Canadian ice dance champions.

It was definitely one of the splits that sent shockwaves through the skating community.

Poirier, now 20, knew at that time that he had more to give to the sport, and immediately began searching for a new partner.

Several thousand miles away in Los Angeles, Piper Gilles, also 20, was thinking that her skating career was all but over. After all, she and partner Zachary Donohue had split after the 2010 World Junior Championships, and a new partner seemed unlikely.

“Sitting out a year, I kind of lost my passion for skating,” she said. It’s kind of discouraging when you know that there aren’t many boys out there to skate with, and once you get to a certain level, there are even less. I kind of thought that I would never really skate again, and I was preparing to move on with my life.”

Gilles was coaching a bit at the East-West Ice Palace in Artesia, and was taking acting classes with the intention of giving it a go in Hollywood. She was starting to book some gigs– a cameo in Simple Plan’s music video for the song Keep My Hands Off of You, and another in the first live video for Death Cab for Cutie.

About the same time, a long list of dance partnerships were ending, and Gilles started to skate again just in case.

“All of the sudden there were all of these boys available, and I thought maybe I had a shot at this again,” she said. “I started to skate a little bit again, and then Paul contacted my old coach Patty Gottwein, and things kind of took off from there.”

Poirier and his coaches thought that perhaps he and Gilles’s styles would match, so a tryout was scheduled.

“When you’re looking for a partner, you have to look so far beyond the partner’s skill,” he explained. “You can try out with somebody and you are both strong skaters, but if your styles don’t match, it’s not going to work out.”

“Our personal styles and timing were already very similar to each other, so we knew that as skaters we were very compatible with each other,” Poirier continued. “The essential part after the tryout after was figuring out if we had the same goals, could we work together, and did our personalities click. That’s probably the most important part of a tryout, because it’s very easy to see pretty quickly if your styles match well enough to be compatible enough to skate together.”

The duo decided to give it a go, but knew that it would mean sitting out a year from international competition since Gilles, an American, did not have the proper credentials to skate for Poirier’s native Canada.

“It was really hard to sit out that first season, but in the end I think that it was really good for us,” Poirier admitted. “It gave us more time together to get to know each other before we put ourselves out in front of an international panel. We knew that citizenship was something that we would really have to work for, but in the meantime, we really thought that this was the right partnership for both of us. Even though there were some complications, it was definitely a small price to pay versus what the possibilities of the partnership were for the future.”

Though they missed the international season, Gilles and Poirier were able to skate at the 2012 Canadian Championships in Moncton, N.B. The duo finished with the bronze medals behind Olympic champions Tessa Virtue and Scott Moir, and the fourth place finishers from the World Championships, Kaitlyn Weaver and Andrew Poje.

“I think it was really exciting for both of us,” said Poirier. “We didn’t really know what to expect since we hadn’t competed against any of the national level skaters yet. It was really hard for us to know where we were going to stack up in terms of placement. We also didn’t have a lot of time to prepare—we had only finished choreographing our free dance at the end of August, so we knew that everyone had an advantage over us.”

Gilles agreed, and was pleased with how things turned out.

“We really wanted to show people that we really enjoy skating with each other,” she said. “We didn’t have any expectations of placement, so winning a medal was like the icing on the cake for us.”

This season, Gilles has been cleared to compete in international competitions for Canada, and she is seeking citizenship in order to represent Canada in Sochi in 2014.

“My mom is now Canadian, and my grandmother is as well,” she shared. “This should help expedite the process, but we’re fairly confident that I will be eligible by the time the Olympics comes around.”

Poirier added, “Between Piper’s mom being Canadian and some good results internationally, we show that we are really ready to represent Canada at the next Olympics. Her citizenship should be fast-tracked, but there are many variables to consider, so we don’t know exactly how long it will take.”

The team chose music from Mary Poppins soundtrack or the short dance, a program that they both enjoy performing.

“It is a lot of fun to skate,” Gilles said. “When you watch the movie, you kind of feel warm and bubbly inside, and to skate to this music is very enjoyable. There is never a moment when you don’t want to see this program. You want people to watch us, and you want them to really get into the characters.’

“We thought it might be too childish, and didn’t want people to think that we were too perky,” she continued, “but it’s really challenging us. We need more character—I need to be a perfect Mary Poppins, and Paul needs to be a great Bert.”

Poirier added, “As we have more time to work with the program and get more comfortable with it, we’ll find the places where we can really bring out the characters. People have a very strong idea as to what these characters are supposed to be, and we if we don’t meet those expectations, the performance could become a bit disappointing. That’s really the challenge of this program.”

For the free dance, they are skating to a program that they have coined “Wild Spirits,” choreographed by coaches Carol Lane and Yuri Razguliaiev. Christopher Dean also helped to tie things together while Gilles and Poirier trained in Colorado Springs for a bit.

“After nationals, we pulled this piece of music out again, and it took us from January until May to piece it all together,” Gilles shared. “It was very stressful, but it has all worked out for us in the end.”

Poirier admitted that the process was a bit frustrating, but he is happy with the final result.

“This is the program that didn’t work the way that we wanted it to,” he revealed. “We had an idea of what we wanted it to look like, and it didn’t turn out the way we expected it to. It was very challenging, but we really wanted to persevere with it. We wanted to make sure that when we presented this dance, it was conceptually and artistically what we set out to do. It took a long time and a lot of trial and error to figure it all out, but we finally did, and we think that as the season goes on, we will get closer to what our vision was.”

Gilles and Poirier have been assigned to Skate Canada at the end of October, and will also compete at Trophée Eric Bompard in November. It will be Gilles’s debut on the Grand Prix circuit.