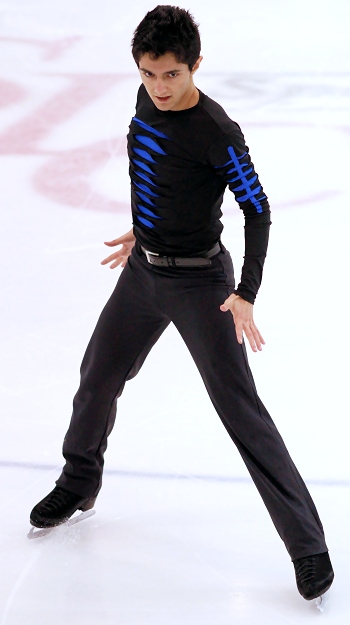 It was a challenging start to the 2011-12 season for U.S. pewter medalist Armin Mahbanoozadeh, who struggled in his both of his Grand Prix assignments. The 21-year-old finished in 10th at Skate America and eighth at the NHK Trophy, all but erasing the memory of his first Grand Prix medal a year before.

“Last season was a tough one for me especially during the Grand Prix,” he admitted. “Training had gotten to the point where I wasn’t looking forward to going to the rink. I was having a lot of issues on and off the ice with motivation. I just wasn’t in a very good place.”

Mahbanoozadeh found himself questioning whether he wanted to continue skating at all, and wasn’t certain if he would even finish the season.

“After the Grand Prix was over, I took some time off and I went home to decide if I was going to continue to skate or not,” he said. “I made a decision that I owed it to myself to end the season as best as I could. In order to achieve that goal, I was going to have to move to Colorado, and I think that I made the right decision.”

The Virginia native packed up mid season and heading for Colorado Springs to train with renowned coach Christy Krall.

“He came here in December, just weeks before the national championships,” Krall said. “Since he had trained here multiple times before, he felt very comfortable. He was a man on a mission; very self motivated and self directed.”

Krall believes that the move has awakened the athlete that was waiting to come out of Mahbanoozadeh.

“I think Armin saw the opportunity to become an athlete,” she explained. “He has a training regiment that lends itself to that. He has the Olympic Training Center nearby that gives provides him with great training opportunities and good nutrition. He has a sleep schedule that allows his body to recover. He is truly understanding what it is to be an athlete. He’s always been a fine artist, but this adds a new dimension to his skating.”

The move renewed also Mahbanoozadeh’s confidence, and he headed to the 2012 U.S. Championships in San Jose, Calif., ready to compete for some hardware. He came away with pewter—his best finish in the competition.

The afterglow of a podium finish was short lived, however, when Mahbanoozadeh learned that he was listed at the second alternate—behind 13th place finisher Richard Dornbush, for the upcoming Four Continents Championships. When gold medalist Jeremy Abbot withdrew from the competition, Mahbanoozadeh found himself on the outside looking in.

“It’s hard to express how disappointed I was,” he admitted. “I knew that not being selected for Four Continents put me at a huge disadvantage this year. At the end of the day I really had to dig deep and answer for myself why I wanted to continue skating. I feel like I have found that answer, and it has made me a stronger person emotionally and mentally. I still don’t agree with the decision that was made, but I’ve come to peace with it, and the only thing that I can do is move forward and do the best that I can at every event that I have.”

After nationals, Mahbanoozadeh decided that he would continue training in Colorado Springs with Krall. The two came up with a game plan created to take him to the next level.

“The summer when we had some time out of competition to really look back at the quad and triple Axel,” he explained. “I think that because these jumps are more solid for me, I can be more confident in competition, and I think that shows not just with me, but will all of Christy’s skaters.”

Krall added, “We try to make our athletes resilient so that they can recover from any variable in competition. If you are brilliantly resilient, we call that “bresilient”. Armin and I are working on helping him to become “bresilient”.

Mahbanoozadeh seems happy with his decision to relocate to Colorado, and is beginning to take advantage of what his new home has to offer.

“There is so much to do outdoors in Colorado Springs,” he said. “We went white water rafting this summer, and the Incline is always fun on the weekends. I’ve added Bikram yoga to my training schedule two to three times a week. It’s nice to sweat it out at 105 degrees after being in a cold rink all day.”

The pewter medalist believes, however, that there is one drawback to living in Colorado.

“The only negative about Colorado Springs is that I am not in school, which is difficult for me because school has always been a focus of mine,” Mahbanoozadeh stated. “I was going to the University of Pennsylvania back when I was in Delaware—it was nice to be able to do both.”

Mahbanoozadeh does plan to return to college when the timing and circumstances are right.

“I eventually see myself going to college full time,” he said. “I’m very interested in computer science and programming, and I’ve been doing a lot of studying on my own at home.”

Though Mahbanoozadeh has not yet been assigned to a Grand Prix event, he competed in the first U.S. International Classic earlier this month in Salt Lake City. He won the silver medal.

“I wouldn’t have been able to compete in Salt Lake City had it not been for the amazing physical therapists from the Olympic Training Center who worked on the ankle that I sprained about five weeks before the competition,” he said. “My training was so solid before the injury, and people told me that U.S. Figure Skating would probably offer me a different event if I withdrew early enough. I wanted to stick it out and compete, and I’m happy that I did.”

In Salt Lake City, Mahbanoozadeh landed the quadruple toe in the short program, a goal of his for the competition.

“It’s really important to get it in combination, because as nice as it was in the short, they hit me with a big deduction since I didn’t have a combo,” he explained. “Other than that, I’ll be working on levels here and there to get to where I want them consistently. Overall, it’s mostly about increased performance and consistency, and I think that we’ll be all set.”

Mahbanoozadeh has set the bar very high for himself for the rest of the season, and hopes to make a big splash in Omaha, Neb., in January at the 2013 U.S. Championships.

“My goal is to be top two,” he said confidently. “I definitely have realized that nationals is going to be a complete bloodbath this year especially this year with all of the great skaters we have in addition to the returning skaters, but I think that I’m ready for it.”

Krall believes that he is ready as well.

“He is really doing this for all of the right reasons—for himself,” she said. “You get a few moments in time throughout your life, and I think that Armin sees that this as his moment.

Mahbanoozadeh is holding out hope that he will be invited to another international even before the U.S. Championships, and plans to be prepared to answer the call if necessary.

“We’re going to be training throughout the entire Grand Prix series in case anything comes up,” he said.

Until then, he will continue working towards his goal of making the World Team this season.

“I see my training and how fast that I’ve improved in the time that I’ve had, and going forward, I have a lot of faith in my coach, choreographer, and my training. I think that the sky is the limit,” he remarked.

“I believe I can post really high scores at nationals with two solid programs. The event will come down to whoever can land the difficult jumps while simultaneously selling their program; I wholeheartedly believe I can do exactly that. It won’t be easy, all the other guys competing for a medal are extremely talented and I have a lot of respect for them. You have to go into the event with a winning attitude to put yourself in a position to get that top spot. You have to believe it to do it.”