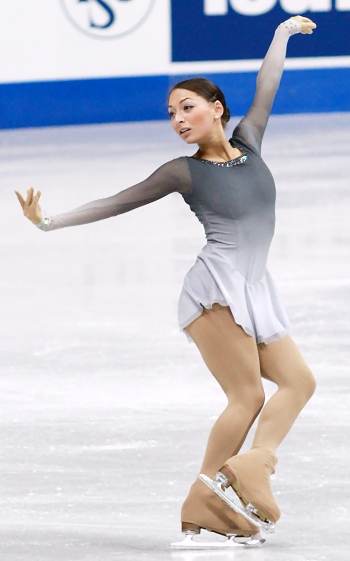 Elene Gedevanishvili of Georgia performs to music from “Schindler’s List” at 2012 Skate Canada.

Gedevanishvili put out an emotional performance to music from the Schindler’s List soundtrack. She underrotated the second jump of her triple Lutz-triple toe, but went on to land a triple Salchow and double Axel. The footwork and the combination spin merited a level four and the two-time and reigning European bronze medalist scored 60.80 (31.48/29.32) points.

The Georgian was overwhelmed with emotions at the end.

“I am a little shocked,” admitted the 22-year-old. “I am really surprised. I never had such a high placement in the Grand Prix. It feels cool, but tomorrow is another day, the hardest day. Today was the preparation for tomorrow.”

“My practices have been going well and I trained a lot,” added Gedevanishvili. “This music and this program is very special to me. My goal is to bring the emotions across, what I feel in the program.”

Osmond, Canada’s new hope, did not disappoint. First to skate, she set the standard with a clean and dynamic program to Mambo No. 8 and Gwendoline. The 16-year-old reeled off a triple toe-triple toe combination, a triple flip, a double Axel and two level four spins to post a new personal best of 60.56 (33.21/27.35) points.

“With how I skated with my personal best, to sit there and watch the others skaters, I learned a lot,” the Canadian bronze medalist said. “It was just kind of fun to wait and see their scores.”

“This is my first Skate Canada and first senior Grand Prix, and just to go out there and skate as well as I did and to be in second is really exciting and a great experience,” she added.

Makarova started well into her romantic routine to Ashram’s Maria and the Violin’s String with a solid triple toe-triple toe and a triple loop, but she completely missed the take-off of the double Axel, popping it. The former Russian champion recovered to show a level-four layback spin, combination spin and footwork, and earned 58.56 (30.19/28.37) points.

“My last season wasn’t good at all, but today I really had fun,” shared the 19-year-old. “I enjoyed it so much I got disoriented in half my program because I was so into the emotion. Today was probably the best feeling I had in a long time.”

The skater from Saint Petersburg revealed that she is coming back from illness and injury.

“There was a virus in Russia going around and everyone at the test skates caught it,” she said. “I got really sick. I had a temperature of 39 for four days.”

Makarova also pulled muscles on a hard fall and couldn’t jump for two weeks after the test skates in mid- September.

Kanako Murakami of Japan opened her program to the lyrical piece Prayer for Taylor with a circular step sequence and then nailed the double Axel, which had given her trouble in practice. However, the 2010 World Junior Champion underrotated the back end of her triple toe-triple toe combo and her two-footed triple flip was downgraded. The 17-year-old had pushed the combination and the flip into the second half of the program in order to benefit from the bonus, but it didn’t pay off this time. With 56.21 (27.70/28.51) points, she is ranked fourth.

Teammate Akiko Suzuki of Japan didn’t fare much better. Her triple toe-triple toe was cheated and downgraded, and her triple Lutz received an edge call. The World bronze medalist landed the double Axel and earned a level four for the combination spin and a level three for the other two spins, as well as for the footwork, however, 55.12 points left her in fifth place going into tomorrow’s free skate. The fast-paced program to music from the Kill Bill and Once Upon a Time in Mexico soundtracks is a new direction for her and came across well.

Russia’s Elizaveta Tuktamysheva, who won Skate Canada last year, is currently struggling with puberty issues. The 15-year-old fell on the triple toe-triple toe combination, but rallied back to hit a triple loop, a nice double Axel, and two level-four spins. The Youth Olympic champion picked up 55.10 points to finish sixth.

Amelie Lacoste of Canada fell on a cheated triple flip to come in seventh at 53.81 points.

USA’s Caroline Zhang showed improvement over the Nebelhorn Trophy and made no major mistakes, however, a low component score and a wobbly triple flip held her back. She is ranked eighth.

Teammate Gracie Gold, who looked great in practice, faltered on the triple flip-triple toe combination and the double Axel to finish a disappointing ninth (52.19 points).