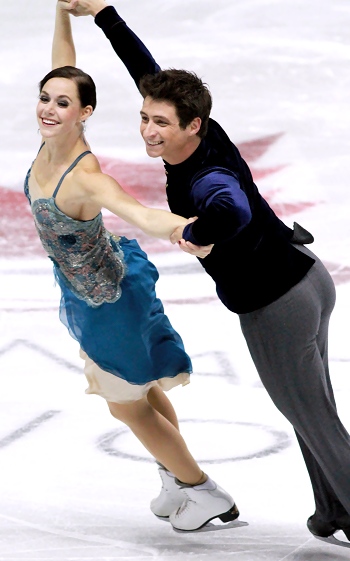 Canada’s Tessa Virtue and Scott Moir perform to “And the Waltz Goes On” by Anthony Hopkins at 2012 Skate Canada.

Virtue and Moir’s Waltz and Polka to The Waltz Goes On by Anthony Hopkins had the elegant look and feel to it you expect from these accomplished dancers, however, the technical side let them down this time.

The most obvious error was the struggle on the rotational lift that only received a level one.

“The lift got stuck,” Moir said.

It was actually the same lift he strained his neck on a few weeks ago which led to their withdrawal from Finlandia Trophy.

Other levels were low as well. The twizzles and the first Yankee Polka sequence merited a level three, while the second Polka pattern and the side by side footwork were a level two. The Olympic champions earned 65.09 (27.72/37.37) points.

“Tessa and I actually felt that we skated very well tonight,” said Moir. ” It was a good start. It was refreshing for Tessa and I to be out there again. We lost a couple of points on the board and we’ll have to go back and look at those in the breakdown, but the general feeling today is positive.”

Cappellini and Lanotte turned in a very upbeat Polka and Waltz to music from Seven Brides for Seven Brothers that featured  level four twizzles and a level four rotational lift. The Italians earned a level three for the Yankee Polka to achieve 65.08 (32.44/32.64) points.

“We are happy with our performance tonight,” said Cappellini. “We had fun. It was definitely an improvement from Finlandia Trophy. It was very enjoyable.”

Riazanova and Tkachenko had chosen music from My Fair Lady for their short dance, a style that suited them well. The Russians completed level four twizzles and a level-four lift, however, their Polka patterns were only graded a level one and two. The team from Odintsovo scored 55.80 (26.50/29.30) points.

“For the first competition it went pretty well,” Tkachenko noted. “We haven’t competed since Worlds in Nice and we are very happy to be in this competition.”

USA’s Madison Hubbell and Zachary Donohue finished fourth at 54.84 points with their Waltz and Polka to music from the Titanic soundtrack. They, too, got a level four for the twizzles and the lift, while the Polka was a level one and three.

The American-Canadian team of Piper Gilles and Paul Poirier, who compete for Canada, had a solid debut on the Grand Prix, and are currently fifth with 53.71 points.

Pernelle Carron and Lloyd Jones of France placed sixth at 51.67 points. Jones stepped out of the twizzles that were graded a level two.