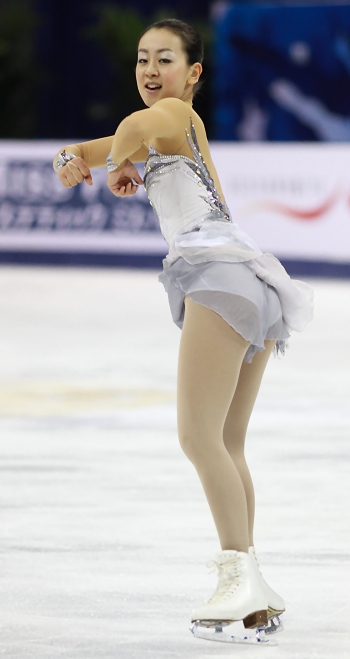 Mao Asada of Japan performs to “Swan Lake” at 2012 Cup of China.

Mao Asada of Japan won the Ladies figure skating event at 2012 Cup of China with a little luck on her side. Overnight leader Julia Lipnitskaya settled for the silver medal, while Kiira Korpi of Finland rose from fourth to earn the bronze.

Asada, dressed in a very elegant white-grey outfit, has a very nice program to Swan Lake choreographed by Tatiana Tarasova, and it suits her perfectly. Unfortunately, her jumps let her down.

The two-time World champion completed only three clean triples, a Salchow and two loops, as she struggled with underrotated jumps. First, the back end of the double Axel-triple toe was badly two-footed and downgraded, then both triple flips were underrotated, and she doubled her Lutz.

“Today, I skated like in practice, but I was not at a 100 percent yet,” admitted the Olympic silver medalist. “I was very happy to skate here and to win.”

“This was my first Grand Prix event this year, and there are a lot of young and talented skaters,” observed Asada. “I enjoy competing with them, and it gives me a lot of motivation. I need to upgrade my level of difficulty.”

Lipnitskaya skated last and it appeared that the pressure got to her after all. The 14-year-old was not as rock solid as usual on her jumps in her routine to Pas de Deux from The Nutcracker. The Lutz in the triple Lutz-triple toe combo was underrotated, and she stumbled badly on the back end of the double Axel-triple toe.

The World Junior champion then rallied back and hit four triples. Her beautiful spins impressed the crowd, and while two were a level four, the combination spin only received a level one as the positions weren’t held long enough. She scored 114.86 (57.43/57.43) points, and totaled 177.92.

In her first reaction, she was pretty harsh on herself.

“I don’t know what that was,” the 2012 Russian junior champion told the press in the mixed zone. “Nothing worked. I’m just lucky to be in second with this kind of skate.”

Later, however, the ambitious young skater realized that not everything was as bad as she had first thought.

“I am very happy to finish in second place in my first senior Grand Prix, because I now have the chance to qualify for the Final,” she said. “Somehow, I wasn’t able to pull myself together today. I probably was too nervous.”

Lipnitskaya and her coach went back to the hotel and almost missed the awards ceremony that took place at the end of the day after the Pairs event. It was already late when the skater suddenly remembered the ceremony. They jumped in a taxi where she changed back into her costume before they reached the rink.

Korpi is one of the most elegant skaters in the ladies field, and her program to Once Upon a Time in America is a very good tool for her. The Finn started well with a triple toe-triple toe combination and triple Lutz, but she popped a loop and a flip.

However, the European silver medalist salvaged points with her level-four spins and footwork, earning 110.17 (51.03/59.14) points for her long program. With a total score of  169.86 points, she pulled up to third place overall.

“It feels really good (to be on the podium),” said the 24-year-old. “My performance wasn’t the best in the short program, and I also had mistakes in the free skating, but overall I am quite happy to go out there and perform quite well after a hard season and all my injuries.”

“My performance here and at Finlandia Trophy was almost the same,” she added. “Here, the beginning was better, and in Finland, the middle part was better. I need to work more on my programs.”

USA’s Mirai Nagasu struggled on the jumps throughout her routine, underrotating most of them and only getting full credit for a triple loop (in combination with a double-toe). She slipped to fourth at 163.46 points.

Tchaikovsky’s ballets were very popular with the Ladies at Cup of China. Apart from Swan Lake and Nutcracker, the audience was also entertained with Sleeping Beauty, performed by Zijun Li of China. The 15-year-old opened with a triple flip-triple toe, however, the first jump was underrotated. She also underrotated and fell on the Lutz and second flip, and finished fifth overall with 160.06 points in her senior grand prix debut.

Amelie Lacoste of Canada struggled with her jumps, falling twice, but managed to hang on to sixth place overall with 135.45 points.

Bingwa Geng of China withdrew from the competition after suffering from a sprained ankle.