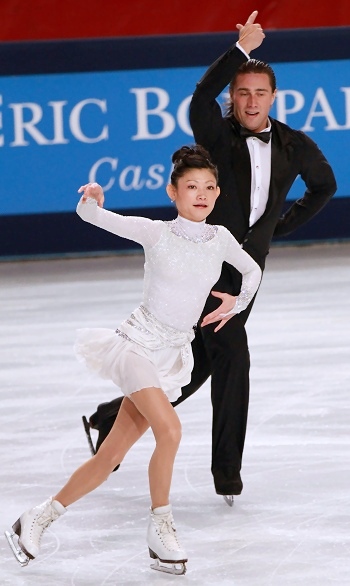 Yuko Kavaguti and Alexander Smirnov of Russia perform to “The Blue Danube” by Johann Strauss at 2012 Trophée Eric Bompard.

Kavaguti, 30, and Smirnov, 28, opened their Waltz short program with a rarely seen and well-executed level-four triple twist. The Russians followed up with side by side triple toes and a solid throw triple loop. The death spiral looked labored and was rated a level one, however, the lift, the side by side spin, and the step sequence were awarded a level four.

“We are happy with our performance, and compared to the Cup of China, the score is much better and I hope the next time it will be even better,” Kavaguti said.

“We are training the quad throw Salchow and we are landing it in practice, but we don’t feel confident enough yet to put it into the program now,” Smirnov explained when asked if they still work on the quad throw.

Duhamel, 26, and Radford, 27, completed a triple twist, a throw triple Lutz, and earned a level four for the four non-jump elements in their ambitious La Boheme program. However, Duhamel crashed on the side by side triple Lutz – a move that currently no other pairs team attempts.

“Today, Eric and I are very disappointed with how we skated,” commented Duhamel. “We always want to skate our best and we are never happy with falls.”

Peng, 15, and Zhang, 28, improved from Cup of China with a solid performance to the famous Beatles piece Live and Let Die. Their triple twist was big, as was the throw triple Salchow, and the triple toes were solid. The newly-formed Chinese team, which has only been together for seven months, earned a new season’s best with 59.92 points (33.83/26.09).

“A year ago I was still skating with my old partner (Dan Zhang), but I had to change partners as she retired from skating,” said Zhang. “We are still a new team and I didn’t expect today’s result. This is only our second international competition, and I think we have been progressing very fast, but we still need time.”

Stefania Berton and Ondrej Hotarek placed fourth at 57.30 points (29.90/27.40). The Italians made no major mistakes in their routine to Paint It Black, landing a triple toe, triple twist, and throw triple loop. However, some elements didn’t appear so smooth, and while the lift and the footwork earned a level four, the death spiral was only graded a level one.

Russia’s Ksenia Stolbova and Fedor Klimov are currently sitting in fifth at 53.64 points. The team from St. Petersburg still struggles with their triple twist, which received negative Grades of Execution (GOE) across the board. Stolbova also stumbled out of the triple toe, and the throw triple Salchow at the very end was wild, but she saved it.

The French teams of Daria Popova and Bruno Massot and Vanessa James and Morgan Cipres came in sixth and seventh. Popova and Massot made no big errors, however, the throw triple loop was wobbly and they only earned one level four – the lift (52.96 points). James and Cipres left many points on the table when she doubled the side by side toeloop (51.44 points).