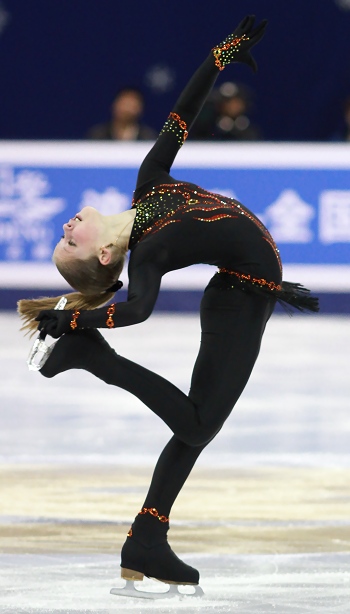 Julia Lipnitskaya of Russia performs to a modern arrangement of “Sabre Dance” by Aram Khatchaturian at 2012 Cup of China.

Lipnitskaya is just 14 years old, but has nerves out of steel, and it shows. The youngest competitor at the Cup of China was completely unfazed by competing in her first senior-level Grand Prix event against such accomplished competitors as Asada.

The World Junior champion went out and nailed everything: a triple Lutz-triple toe combination, a triple flip, a double Axel, and incredible spins. The only flaw was an edge call on the flip. The teenager still needs to improve her speed, ice coverage, and expression, however, her elements are really strong.

“Today, I liked everything in my program,” said Lipnitskaya . “I did everything I wanted to do, and now I am a little unexpected in first place.”

“I actually thought my score would be higher,” she confessed. “At Finlandia Trophy, I made an error on the combination, I got minus two on it, and here, with a clean skate, my score is lower.”

Her goal here is to make the top three so that she has a chance to qualify for the Grand Prix Final.

With I Got Rhythm by George Gershwin, Asada chose a more playful style than usual, and it suits her well. She didn’t risk the triple Axel, but went for a nice double instead. The triple loop was good, but she underrotated the flip in her combination with the double loop, which cost her a lot of points.

Lipnitskaya scored 10.90 for her combination, while Asada received just 4.80. The five-time and current Japanese champion was the only skater to pick up a level four for all three spins and the footwork. She trails Lipnitskaya by 0.17 points with her score of 62.89 (31.83/31.06) points.

“This is my first competition of the season and I was nervous,” admitted the 2010 Olympic silver medalist, “but it was good. I performed like in practice.

“When I competed in the senior Grand Prix the first time in 2005, it was also in China, similar to Julia now,” recalled 22-year-old Asada. “I won my first Grand Prix title when I was 15. In the past seven years, I had a lot of ups and downs. Now there are indeed many young skaters at a high level. I hope that I can be competitive and I just want to skate to the best of my ability.”

Nagasu performed to the entertaining Downhill Special by Benny Goodman, and sold her program very well. The triple toe-triple toe was underrotated, but the triple loop and double Axel, as well as her spins, were solid.. The former U.S. champion picked up 59.67 (31.04/28.72) points.

“I’m happy that I improved on Finlandia Trophy where I fell on my toe-toe, and this time I only put my foot down,” said the 19-year-old. “That’s a big improvement, and my points were lot higher. I had a lot of fun performing today. Hopefully, I can keep that mind set for tomorrow and skate better and just improve.”

Skating to The Girl with the Flaxen Hair, Kiira Korpi of Finland struggled with her planned triple toe-triple toe combination. She did a three-turn out of the first jump and only added a double toe. The European silver medalist recovered to pull off a triple loop and a double Axel, as well as strong spins and footwork, to come i fourth at 59.69 points.

Amelie Lacoste of Canada skated much better than last week at her home Grand Prix. Her program to The Feeling Begins was highlighted by double Axel, a triple flip-double loop, and a triple loop. She is ranked sixth at 57.43 points.