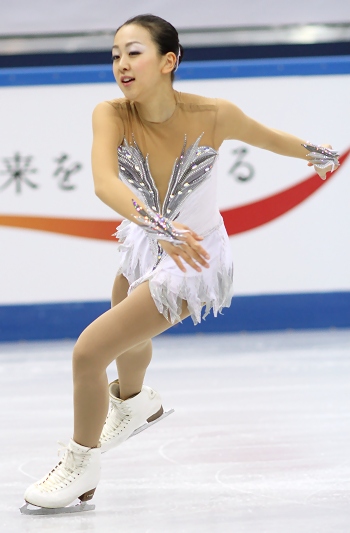 Seven years after her triumph in Torino (Italy), and three years after her victory in Goyang City (Korea), Japan’s Mao Asada won her third title in the Ladies discipline at the 2012-13 ISU Grand Prix Final of Figure Skating. USA’s Ashley Wagner captured the silver in the dramatic event, while Japan’s Akiko Suzuki won the bronze.

Asada’s performance to Tchaikovsky’s Swan Lake was a major improvement over her performance at 2012 NHK Trophy a couple of weeks ago. Unfortunately, the Olympic silver medalist was still not perfect. Two out of six triple jumps in her routine were called underrotated (including the back end of the double Axel-triple toe loop combination), her triple Lutz received an edge call, and she doubled her planned triple Salchow.

“Going into today’s free program, I wanted to make sure I had all the elements right without any mistakes,” said the 22-year-old. “Going over my performance, there weren’t any mistakes, and that is what I want to take away from today. I need to work on the level of accuracy, though. I want to show this is a good program and to skate the best I can.”

It was the first Final for the five-time Japanese champion since her victory in Korea in 2009.

“I am happy that I was able to skate clean,” said Asada. “I am relieved because I had some problems during the season, like not having enough speed in my long program and some other things that needed to be improved. All of that just started to crystallize.”

“In the warm up, I did not feel quite good,” she revealed. “I was overcome by the emotions, and I was concerned that maybe I was not in a right condition. However, after the six-minute warm up, I decided I have a very strong will for my performance, and that helped. For the moment, I feel relieved. I will work hard for my next competition.”

Wagner, who stood in second after short program, opened her routine for Samson and Delilah by Camille Saint-Saens by nailing two solid jump combinations, but then the student of John Nicks crashed hard on an underrotated triple Salchow attempt, landing on her hip in a rather painful looking manner.

“I do not think that it is anything long-term,” she later told the press regarding the injury. “I think for the next couple of days I will be pretty sore. We’re going to have to see how it (the injury) progresses over the weekend. The doctor said it’s a “hip pointer”. I don’t know what that is, but I can tell you it really hurts. We might be looking at getting X-rays next week.”

Unfortunately, it was not the full extent of the US champion’s woes for the night. Later in the program, she hit the ice almost face-first after the second jump in a triple loop-double Axel sequence. The 21-year-old got her breath knocked out of her, and for a second, it looked uncertain if she would be even able to continue.

“Every now and then you have such a fall,” she later joked, although in evident pain. “I like to go big or go home, so when I fall, I like to fall really hard.”

Nevertheless, Wagner proved to be a tremendous competitor as not only did she push forward through obvious pain, but also pulled herself together to nail the final triple flip. She only earned the fourth highest score in the long program (115.49 (54.93/62.56)), but few would begrudge the skater the silver she won (181.93).

“I am really proud of myself that I was able to pull myself together,” said the Four Continents champion. “After a fall like that, coming into the next jump you are pretty terrified that it will happen again, but I knew that I could either give this competition away or I could continue to fight. I am happy that I was able to push through.”

“It’s been a long season. I’ve been going since September,” Wagner summed up. “I’m excited to have a break before Nationals. A down competition like [this] is bound to happen. Better here than at Nationals. I had a great short program here, personal best or at a least season’s best, and I am definitely taking that away.”

Suzuki finished third in the long and overall (180.77) with a flawed performance of her stunning O routine from Cirque du Soleil. Despite a strong outing of this program at the 2012 NHK Trophy, the student of Hiroshi Nagakubo and Yoriko Naruse decided to make some changes to her routine, replacing two triple Lutzes (on which she had edge calls) with two triple flips, and doing a solo triple Lutz instead of a solo triple flip.

Although the World bronze medalist believes that the flip is a better jump for her, the changes, so soon before a major competition, was the cause of problems. She popped the Lutz into a single, and her final jumping pass – a triple loop, ended in a fall and was downgraded. She scored 115.77 (56.79/60.98) points.

“Yesterday was yesterday, today is today,” said Suzuki. “I went from this morning feeling that this is a new day. I told myself to do everything I can completely and cleanly. I must say the first two jumps were high quality, but since NHK Trophy, we did change some elements in my program. I couldn’t make the necessary adjustments that I needed to make. I will think with my coach about how we can make my program better.”

Despite winning a medal, the 27-year-old was clearly disappointed in herself.

“The outcome is the outcome, but there are a lot of regrets about today’s performance,” the two-time Japanese silver medalist told the press. “There is still the rest of the season remaining, so I hope that lessons learned here will be of particular use. It was very nice to skate in this venue here. It has been my fourth consecutive (Grand Prix) Final, and I think I’ll be able to gain from that experience.”

“I thought I did a good program yesterday,” summed up the skater, who has been struggling with her Short Program all season long. “I wanted to bring that momentum and mood into my program today. I just realized how hard it is to have a solid long and short program.”

Finland’s Kiira Korpi finished fourth (174.94) with a hit-and-miss performance rather typical for the 2012 European silver medalist. She began by doubling her first jump in what was supposed to be a a triple toe loop-triple toe loop, and went on to pop a triple Lutz into a single. The skater recovered to land a triple flip and then doubled her loop later in the routine. She scored 111.52 (51.34/60.18) points.

“I feel ok,” said the 24-year-old. “I mean it wasn’t my best performance, but considering the situation I had coming to this competition, I’m overall pleased with the performance.”

“I don’t think there was any certain thing that was wrong,” she replied, when asked about the reasons for her mistakes. “I made a few jumps too easy because I hadn’t been able to do as many program run-throughs as I normally do before competition. So maybe that’s why I wasn’t feeling confident.”

“As for the audience, it was really supportive for everyone,” Korpi added. “Even when I did a single Lutz, they were applauding, and then I got some energy for the next jumps. Now I have the Finnish National Championships next weekend.”

In what is seemingly becoming her tradition, Russia’s Elizaveta Tuktamysheva skated much better in the long program than she did in the short. This time she was not flawless, stepping out of the back-end of her opening triple Lutz-triple toe loop combination, as well as on a solo triple Lutz.

“I didn’t feel that well and my knee was hurting quite a bit,” the 15-year-old later revealed. “I was even thinking of pulling out as I didn’t want to skate, to be honest. However, just before stepping on the ice, I was able to pull myself together mentally. I had to tell myself that everything is not over.”

The rest of her jumps were clean, however, and she even managed to produce a double Axel-triple toe loop combination after the half-way mark. She placed second in the long with 117.14 (63.65/53.49) points, but remained in fifth place overall (173.75).

“When I did the triple-triple combination, even though it wasn’t pretty, I knew that I still had a chance to turn in a good skate,” noted the teen from Glasov. “I am very happy with today’s performance, especially after not-so-good practices in the last few days.”

USA’s Christina Gao remained in sixth overall (154.54) after an uneven performance in which she underrotated the second jump of a triple flip-triple toe, and fell on her second triple flip. She also received an edge call on a triple Lutz (in combination with a double toe).

“It felt much better than yesterday,” claimed the 18-year-old. “It was hard. I did not get a good warm up, but I am glad I pulled it together through the program. I know that I am tough and I am more consistent this season than I ever was before. Overall I am happy with how I did.”

“In Paris (at the 2012 Trophée Eric Bompard), I also skated poorly in the short and then came back with the stronger long,” she mused. “I did the same thing today. I still have to figure this out. I have to stop coming from behind after the short.”