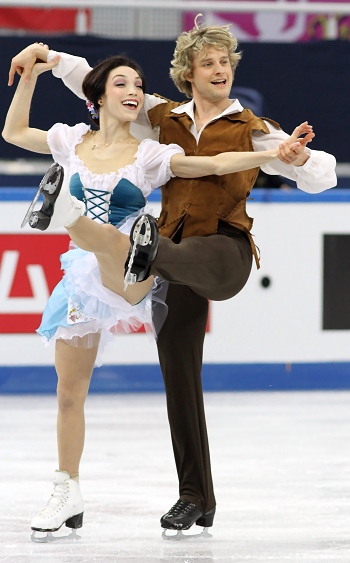 USA’s Meryl Davis and Charlie White took the lead in their first competition against their perennial rivals Tessa Virtue and Scott Moir of Canada at the 2012-13 ISU Grand Prix Final of Figure Skating. Nathalie Pechalat and Fabian Bourzat of France placed third.

Davis and White, both 25, produced an effortless program to Adolph Adam’s Giselle, but only earned a level three for both sequences of the Yankee Polka pattern to earn 73.20 (35.15/38.05) points. At the end of last season, the skaters claimed that they liked the choice of a pattern dance for this year’s Short Dance, and they still stand by their opinion.

“We got to compete this dance a couple of years ago,” said White. “Obviously in a very different way, we all had the same music which kind of gets on your nerves after a while. But generally, I think it was a good dance for us, and we like to take advantage of the quick feet in skating.”

“So coming into the season it was something we have been excited about,” he added. “I think in the end, we did really well and we enjoyed it. I mean, the key points are a bit of pain because they go by so fast, but it’s a new challenge given to the top teams to keep them on their toes.”

Having their dance set to ballet music presented another challenge for the Olympic silver medalists.

“This dance is completely Marina’s (Zueva) idea,” explained Davis. “She is very well-educated in classical dance, music, and ballet, much more so than Charlie and I are. So when she came to us with the idea, she already knew how she wanted to do it and it was very exciting for us. We watched many different versions of Giselle and we spent a lot of time trying to figure out what would be the most effective to transfer to the ice. It was certainly a challenge. We are quite happy with the result.”

They are also very pleased with the way the dance is progressing.

“We both feel like this program was a big improvement for us over our first two competitions of the season, which is something we’re aiming for,” Davis told the press. “We try not to let ourselves get too far ahead of where we are at the moment. Before the competition, we talked about using the opportunity to just really feel and express the music to the best of our ability.”

However, the Americans tried to put things in perspective.

“You always want to be the leader, so that’s what we’re aiming for, but we really just want to improve,” said White about their rivalry with Virtue and Moir. “Worlds is our goal this year, to become the World Champions. We’re aiming towards that, and this is a good stepping stone.”

The Canadian’s dance, set to Anthony Hopkins’ The Waltz Goes On, had a very different take on the theme. The sinister and seductive program slowly unfolded in front of the audience’s eyes, pulling them right into it.

“I think clearly in the beginning of the piece, there are certainly minor tones in the music that we wanted to take upon for my character,” offered 23-year-old Virtue.

“We have played with different storylines, but there is certainly something very upsetting and emotionally disturbed about my character [in this dance], and Scott has to try to cheer me up,” she explained. “As the program progresses through the polka, it starts to heal through the love of dance and it kind of becomes a love story.”

Unlike the Americas, the two-time and current World champions were not enamored with the ISU choice of the Polka.

“I think for us, the idea of creating an entire dance around the Yankee Polka was a little bit daunting,” admitted Virtue. “When we found this music for the waltz element, we fell in love with the dance. I think that really helped us. And like Charlie said, we think of it as a challenge: to prepare it, to create a story from the beginning, and include part of the original dance.”

The team received a level three on one of the polka sequences and a level four on the other, but the ice dancers got their twizzles downgraded to a level three.

“It’s a bit surprising,” said Moir, 25. “We’ll just have to see it again to find out what has happened there.”

“My best guess would be that they did not like the fact that Scott kind of interrupted his rotation during the second one,” said the team’s coach, Maurizio Margaglio.

The Canadian champions scored 71.27 (34.01/37.26) to finish behind the Americans in both the technical and program component scores.

Pechalat, 28, and Bourzat, 31, elicited the loudest response from the crowd for their interpretation of the Yankee Polka as a French can-can.

“As a compulsory dance we used to like Yankee Polka,” said Pechalat. “The steps are so interesting, the way they are moving. Much more interesting than the Rhumba (last year). I did not like Rhumba at all.

“But we needed to do a fresh dance,” she explained, “because compared to dances like the tango, the polka is a bit old-style. So then we found an idea to build this dance around the can-can, which is still danced in Paris, and which a symbol of our country. It made it more involved and motivating.”

Pechalat was not certain who came up with the idea first, but believes it might have been her.

“I was very adamant that we are French, that we have to do a French dance, to French music,” she recalled. “Fabian, I think, was thinking more of a Jewish dance, but I said “No!,” and the coaches took my side.”

The ice dancer was so intent on staying true to the spirit of the dance, that she opted to skate it in a costume which is essentially a shorter version of a cabaret outfit – pretty risque by skating standards. When Pechalat was challenged about it, her partner was quick to come to her defense.

“When we were discussing the costumes, I kept insisting that we should use less material, but she refused,” he joked.

Despite their proclaimed love of the Yankee Polka, the French only earned a level two on the second sequence.

“It just depends on what the panel wants to see,” said Bourzat. “So the first part of the season, we got a panel that saw what we did. Maybe this one is looking for something different than what we are working on. We just need to make sure that we have the proper creation to fit for everyone.”

The World bronze medalists were pleased with their performance, though.

“We think it was one of the best performances we’ve done since the beginning of this season,” said Pechalat. “We feel good. We are doing clean edges, clean elements, and it’s nice to see the Russian audience.”

Russia’s Ekaterina Bobrova and Dmitri Soloviev are fourth with 66.23 (32.65/33.58) points. All their elements were level three and four, however, they had lower Grades of Execution (GOE) and lower Program Component Scores (PCS) than the higher ranked teams.

“You always can show something better,” said Soloviev self-depreciably. “There are so many elements to improve, it’s impossible to stop!”

“After three events, I’d say this was the best one,” added the 23-year-old. “We were both good in emotions and technique. We focused mostly on the (Yankee) polka in practices. It’s not easy to get level four. You should always prove that you’re the best.”

“We’re satisfied with our performance,” agreed 22-year-old Bobrova. “We already see technical progress, and results show this too. Of course, we were nervous, but it helped us. The audience supported us so warmly.”

Italy’s Anna Cappellini, 25, and Luca Lanotte, 27, were the only team to get a level four on both sequences of Polka. However, the students of Paola Mezzadri and Igor Shpilband are only a very close fifth with 66.11 (33.93/32.18) points as they got the lowest component scores of all the teams.

“We managed to dance with the right attitude, focusing on the interpretation of all the small details,” said Cappellini.

This is the second trip to the Final for team, who competed a couple of years ago in 2009.

“I think it’s a more natural process that we are here now in the Grand Prix Final,” said Lanotte. “Not to say that we did not deserved it the first time, but it was more about skating well at exactly the right moment. We did our best this season, and we keep working hard on improving ourselves.”

“The goal is to arrive in the best way possible at the European Championships next year,” he summed up. “We feel we are becoming very strong and able to compete at the same level with everyone else.”

Russia’s Elena Ilinykh and Nikita Katsalapov, who finished sixth (63.56), were were so disappointed by their performance that they did not stop to talk to the press.