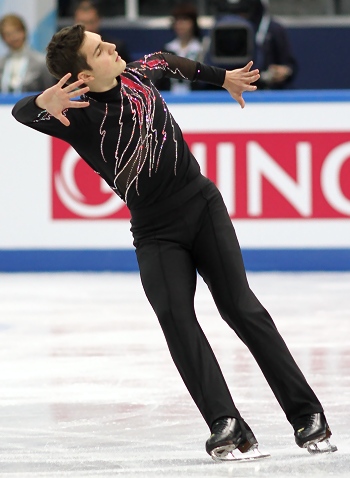 USA’s Joshua Farris performs to Bach’s “Suite for Solo Cello No 1 in G Major” at the 2012-13 Junior Grand Final of Figure Skating.

The 2012-13 ISU Junior and Senior Grand Prix Final of Figure Skating began today at the Iceberg Skating Palace in Sochi, Russia – the future venue of figure skating competitions for the 2014 Olympic Games.

The first skater to ‘test the waters’ was Japan’s Keiji Tanaka, who saw the event off to an energetic, but flawed start. The Japanese is currently sitting in fifth, 12 points behind the leader, USA’s Joshua Farris. Maxim Kovtun of Russia is second, followed by USA’s Jason Brown.

Farris, who was the last of the six competitors to skate, was not flawless: he stepped out of his opening triple Axel, but was able to recover and land a solid triple Lutz-triple toe and triple flip.

“I totally blocked it out of my mind,” he said about the mistake. “I told myself, forget about it, you can’t change it. Fix what you need to do. I was focusing on what Damen (Allen) and Christy (Krall) were telling me.”

His program to Bach’s Suite for Solo Cello No 1 in G Major was the most detailed one of the event, with all elements woven together by connecting moves to produce a seamless routine that matched the understated cadence of the music perfectly. The overall effect, except for occasional minor breaks in line, was almost mesmerizing.

“I feel really good about my Short Program,” the World Junior silver medalist told the press. “It was kind of funny. I felt like it lasted about 30 seconds, it went really quick. I had a little bobble, but it means there is room for improvement to keep working towards the next competition (nationals). I can’t explain how exciting it is to skate in the Olympic rink. It’s so inspiring. Once I stepped in the rink, I was amazed, it’s so much fun.”

The student of Christy Krall and Damon Allen earned 74.53 (40.32/34.21) points, picking up the highest technical and presentation scores of the night. The 17-year-old, who won the Short Program of the competition at both the 2011-12 Junior Grand Prix Final and the 2012 World Junior Championships, claimed that he has improved his focus since then.

“I was pretty nervous, but after I skated this morning, I realized I’m skating for me and it’s not about anybody else and that calmed me down a lot,” said Farris when asked how he felt about being the top-ranked junior man going into the event.

“Compared to the World Junior Championships, I think my mental state is now a lot calmer,” he added. “Back then, I got really nervous before the long program, but I have been training so much better. I think I have learned a lot from the Junior Worlds. In fact, I feel fairly confident going into the long program this year.”

In contrast to the leader, Kovtun relied more on his personal charisma and power than on intricate choreography to express the theme of his  “Lawrence of Arabia” routine.

“Tatiana Anatolievna (Tarasova) decided to use this music, and I think she just invented the story,” explained the Russian Junior bronze medalist. “It’s like I’m leading some Eastern army to fight in a war.”

The skater avoided any major mistakes, landing a triple Lutz-triple toe and triple Axel, however, he turned out of his triple flip landing. He also picked up low levels of difficulty, gaining level four only on his final combination spin.

“During the performance, I felt great support from the audience,” said the 17-year-old. “There was a hard moment for me in the jump combination, and sometimes I miss this element, but this time I’ve done it. That’s because of people’s support.”

“Today I got a season best, although in training I skate much better,” he commented. “Actually, I’m always good in the short programs, but in free skating I tend to relax too much.”

Brown, the defending champion who has struggled with the triple Axel in the past, finally nailed the element in Sochi. Unfortunately, the 17-year-old then doubled his triple flip.

“I was really excited that I started my first competition right,” said the student of Kori Abe and Rob Peal. “I have a clean Axel, and doing it in a program was very exciting. I guess I was just too excited after landing my triple Axel for the first time, and I think it had something to do with messing up on the flip.”

The American was otherwise strong, and the highlight of his routine, set to The Question of U by Prince, was a very elaborate straight-line step sequence, packed with changes of direction and full-body moves. He also earned level four on all his non-jumping elements.

“I think since last year I have really pushed myself with artistry and my spins,” the World Junior bronze medalist said about his progress. “I am also trying to push my programs in different directions and trying to get more diverse.”

Now that triple Axel is out of the way, Brown is ready to work on his next big goal.

“I’ll start working on a quad when I get home,” he told the press.”Hopefully, I’ll get to do it quicker than a triple Axel. I worked on the Axel for three years.”

“I feel pressure in the sense that I want to do well for myself and I want to skate my best at every event,” he explained. “That’s a passion that I put myself in and I put myself at high standards. Overall, coming back from winning it last year, I don’t feel a significant amount of pressure. It’s a new season with new goals, like putting in the Axel. I’m focusing on getting two good programs with the Axel and ending up in a good spot.”

“I hope to skate a clean program,” said Brown, regarding the free skate. “I also have a triple Axel planned. I want to stay calm through the whole program and know that no matter what happens with the Axel, to keep moving.”

Ryuju Hino, who struggled with his jumps at the morning practice, managed to pull himself together when it counted. The Japanese Junior champion hung onto the landing of all his three jumping passes, however, his triple Axel was visibly off-axis in the air. His routine to Kodo’s TaTaKu was impressive, though, with nicely stylized martial-art moves distributed throughout the program, and he earned a new season’s best of 67.55 (38.20/29.35) points for fourth place.

“I did everything well,” said the student of Hiroshi Nagakubo. “It is the Junior Grand Prix Final, and I was very nervous. I thought I’d be calm, and I am surprised that I was nervous. I look forward to my free skating with confidence, although I am afraid I might struggle with nerves again.”

The skater’s father is Russian, therefore he was quite comfortable competing in Sochi.

“There are many prejudices about the Russians,” said the 17-year-old. “I heard a lot about Russians from my family, that they are kind people, and that made me comfortable.”

“I did a double Axel instead of triple because I was nervous,” explained the 18-year-old. “I am happy that I managed to cope with my nerves later and performed other elements well.”

“I’m getting more experience now and can better control my nerves,” added the Japanese Junior bronze medalist. “Put together with my experience from the other competitions, it will help me in the future. I hope I will be able to perform better in the free skating tomorrow.”

Boyang Jin put his hands down on the landing of his triple Lutz, and was only able to tack on a single toe. He placed sixth (60.73).

“I felt nervous today, probably because this is my first time at such a prestigious competition,” said the 15-year-old from Harbin.