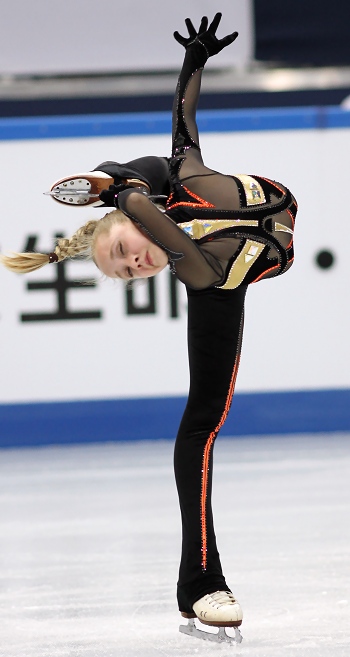 Russia’s Elena Radionova performs to music from “The Fifth Element” soundtrack at the 2012-13 Junior Grand Prix Final of Figure Skating.

Elena Radionova, who was expected to be a sure bet for the title in Sochi, place first, however, the Russian prodigy is only a couple of points ahead of USA’s Hannah Miller and three points ahead of teammate Anna Pogorilaya.

Rock-solid and fierce at her two qualifying events in France and Austria, Radionova stepped out of the landing of the easiest jump in her program— a double Axel, and got an edge call on her triple flip attempt in the Final. However, the 13-year-old nailed her opening triple Lutz-triple toe loop combination.

“It is such an honor for me to skate here,” she said, regarding qualifying for the Final in her first international season. “It was a big goal for me and I am so happy that I was able to reach this level. As for my performance today, not everything worked out. I made an error on the double Axel. It was a mistake in the jump itself. I hope to skate better in the free skating.”

Although Radionova must have been quite upset by her mistakes, the student of Inna Goncharenko did not let it show during the performance. She displayed all signs of a major star in the making as she delivered her The Fifth Element routine to the maximum impact, never breaking her connection with the audience even for a second.

“Everybody is different and it depends a lot on your psychology,” said the teen from Moscow. “I just was born with this kind of psychology. I go out and just do it. I love skating in front of an audience. The most important for me is to please the audience and the score then depends on the judges. I want to be consistent and to perform well, no matter what. Today, for example, my music started five seconds late and I had to catch up. I am pleased that this didn’t affect me.”

“It’s a big honor to be number one, but at the same time, you have more responsibility,” she noted. “When you compete in Russia, you get bigger support from the crowd, but it is important to have confidence in yourself as well.”

Miller, the only skater in the Final not to attempt a triple-triple combination in her short program, had to rely on her other qualities to succeed in a very competitive field. Fortunately, the skater, who trains under her aunt (Kirsten Miller-Zisholz), has so many good qualities, that it is a challenge to pick just one as the best.

The 16-year-old excelled technically by picking up a level four for all her non-jumping elements and by moving her triple loop-double loop combination to the second half of the program to increase its value. The choreography of her routine to Tanguera by Sexteto Mayor was so tight and complex that it would not look amiss at a Senior event.

“I am very excited,” said the teen. “I worked so hard for this, just doing the program over and over. I think I put out the best program I could.”

“We moved combination to the second half, because it is worth a bit more points,” she acknowledged, “and we put the double Axel in the beginning because it is a really strong jump and it goes well with the music there. I don’t think it makes that much of a difference (whether the combination is in the first or the second half of the program). I am working on triple-triple combinations, but it is not yet strong enough to be put into the program.”

Pogorilaya, has also decided to upgrade the difficulty of her program. She replaced two toe loops with a triple Lutz-triple toe loop combination, which is worth an impressive 10.10 points. Even though the 14-year-old struggled with it during the morning practice, crashing on a triple Lutz several times, she nailed it during the performance to pick up 10.80 for the effort, one third of her technical score.

“I’ve increased the difficulty in the short program because everybody has this combination,” explained the rather unheralded skater, who was initially assigned to only one JGP event. “Without the Lutz-toe loop I would have no chances.”

“I had an injury last season, but have I started to work harder this year,” added the student from Moscow. “I understood that I was a little behind all other girls who were doing triple-triple combinations, but slowly I started to get into shape and catch up with the rest of them.”

“It’s unbelievable to be in the Final,” Pogorilaya told the press. “Overall, I’m satisfied with the performance. There was a mistake in the step sequence, and that is upsetting, but I’ve done the hardest jump combination, which was my main aim for the short program.”

Wang had to overcome a shaky start in her performance to Crouching Tiger, Hidden Dragon as the lights in the arena dimmed momentary while she was setting up for the opening combination. The student of Christy Krall and Damon Allen only added a single toe loop to her triple Lutz, earning an automatic “-3” Grade of Execution (GOE) for the element.

“I noticed that the light blinked, but I don’t think it really distracted me,” Wang later told the press.

The 16-year-old went on to land a triple flip, which received an edge call, and then lost a few points because her step sequence was only rated a level two. With 51.16 (26.24/24.92) points, it will be hard but not entirely impossible for her to win a medal in Sochi, and the skater is looking forward to the challenge.

“I feel like I fought back for the rest of the program, and I’m really proud of that,” said the teen from Colorado Springs. “I’m going to skate how I’ve been practicing in the long program and hope for the best. I think my artistry definitely has improved. I’ve been working a lot. I made a few changes to my jump, so I hope I can show that on Saturday.”

Japans’ Satoko Miyahara made even more drastic changes: she replaced her routine to a J. Strauss’ waltz with a brand new one set to Saint-Saens’ The Swan. A more serene and introspective character of the music highlighted her superior basic skating skills, great lines, and excellent presentation skills. Technically, though, her performance left something to be desired.

The student of Mie Hamada fell on her opening triple Lutz that was supposed to be a part of a triple-triple combination. The Japanese Junior champion otherwise earned a level four on all her non-jumping elements, and picked up 49.60 (26.22/23.38) points.

Even though the Iceberg venue was at best one-third full on Thursday night, the young skater found it intimidating.

“I was surprised about the large audience,” said the 14-year-old. “I was inspired and anxious. I was nervous and missed my jump. Now I have to forget that I made a mistake and I need to concentrate on my free program. I want to perform with no mistakes and will focus on the jumps.”

“I’m not very happy. I feel like I should’ve been able to do it better,” said the 15-year-old. “I was really glad to do the rest of the program I still have a chance to fix my mistakes though. I still feel very confident coming into the free program because I know I’m a very consistent skater, so I will be fighting a lot.”