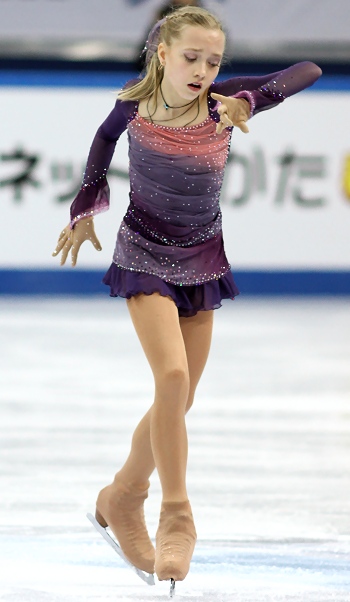 Elena Radionova of Russia won the Ladies title in her debut at the 2012-13 Junior Grand Prix Final of Figure Skating.

The final day of the 2012-13 ISU Junior and Senior Grand Prix Final of Figure Skating began with the Junior Ladies event. The sheer intensity of the six performances, as well as the number of attempted and mostly rotated triple jumps per program, nearly matched that of the of a high-ranked Senior competition.

Unlike her performance in the Short Program, Radionova was her usual un-stoppable self in her free skate to music from the soundtracks And Finally I Love You and The Country of Deaf soundtracks.

The only negative Grades of Execution (GOE) in the protocol of her skate were those stemming from edge calls on both of her triple flips – something she did not receive at her two qualifying events.

Even more impressive than watching the 13-year-old reel off seven triple jumps over the course of three and half minutes, was witnessing her doing it while staying in character of her somewhat introspective and sophisticated routine. Stylistically, it was quite a departure from her short program two days ago, but she coped with the theme equally well, earning 118.50 (64.65/53.85) points for the long program and 179.40 points in total.

“I am very pleased with my performance,” said the teen from Moscow. “Everything worked out for me. I did all the jumps, all the combinations. I was in a good mood when I skated. You need to skate calmly and with confidence. I wanted it so much and it just happened.”

“Honestly, I didn’t have much strength to skate the free program today,” she added, “but I was able to pull myself together. At the end, I didn’t even get tired that much.”

The student of Inna Goncharenko claims that she loves all the triples: “I do all triples. I love the Lutz, and even more, I like the Salchow.”

The next goal for the young competitor is to improve her presentation.

“I love to watch how Senior skaters hold themselves on the ice, the way they glide,” said the Russian Junior bronze medalist. “I know that what I do on the ice still looks like “kid skating,” and I want to learn how to present myself to the audience. To glide on the ice just as effortlessly as the senior girls do. I want to be solid in my performances and to bring people joy with my skating. Consistency is the most important.”

Without a triple-triple combination, Miller was unable to match the leader jump-by-jump. She attempted six triple jumps in her routine to The Storm by Balázs Havasi, hanging on to the landings of all of them. Unfortunately, her final triple Salchow was underrotated and a triple Lutz received an edge call.

Nevertheless, the skater, who works with Daniel Barantsev and Tanith Belbin on her choreography, presented one of the most mature and complex programs which allowed her to pick up the second highest program components scores. She scored a new personal best of 109.23 (56.16/53.07) points for the long, and with 168.41 overall, remained in second place despite finishing fourth in the long.

“I am very happy about it,” Miller said later. “I got my personal best and I turned in the best skate I could have done. I have been training really long and hard for this, and I am really happy that it turned out how I wanted it to. I think I performed it well, and all my spins and jumps were the best they could be.”

The US Junior bronze medalist admits to being relieved at the end of her program, breaking into a huge smile after her last double Axel.

“I always smile at this point of the program,” said the student of Kirsten Miller-Zisholz. “It’s exciting to have the last jump done. My goal was to come here and to skate as well as I could. It put me in the medal slot, so I am really excited.”

Pogorilaya’s program to Danse de Phryné from Faust was off to a rough start as the skater stumbled out of her opening double Axel, which was supposed be in combination with a triple toe-double toe.

However, the 14-year-old showed remarkable skills as both a skater and as a competitor. To make up for the mistake, she  added a double toe to her double Axel-triple toe combo, and then did a  triple Lutz -triple toe (instead of a planned triple-double). Overall, her jump content amounted to seven triple jumps, but she received an edge call on her triple flip.

“I hesitated going into the double Axel, and I had to switch my combination to triple Lutz-triple toe,” she explained. “If I hadn’t, my marks would have gone down. I have the Lutz toe loop in the short program, and I decided to do it during the performance. I had nothing to lose. And when I did it, it calmed me down a lot.”

“In general, I’m very glad that I overcame my fear and showed everything I could,” Pogorilaya told the press. “In both programs I achieved a season’s best. I have grown up. I’m not afraid any more, and my legs are not trembling. Or may be they still do, but only after the performance – not before it, and it makes all the difference in the world.”

“It was funny that I gained more confidence after I nearly fell on the double Axel,” she mused. “After that, I was skating a lot more freely and was able to do everything I wanted. It was really tough to skate today because of the bad weather. It was gloomy outside, but at the end, I gained some strength and was able to finish on a high.”

USA’s Angela Wang finished second in the free program, but remained in the fourth place overall. She also produced seven triple jumps, but her last triple Salchow was underrotated. The 16-year-old opened her performance to music from Ladies in Lavender with a powerful triple Lutz-triple toe loop-double toe loop combination, and maintained energy and flow throughout. However, her presence on the ice is still not quite as strong as those of the leader. She scored 110.89 (58.90/51.99) points and 162.05 overall.

“I felt really good,” said the student of Christy Krall. “That’s how I’ve been training, so I am really glad that I was able to show that today. I felt really calm out there. I’ve been working really hard on my artistry for this program, and I hope that showed. I learned a lot from this competition. It’s my first major international and I gained a lot of experience. I hope I can use that for the Nationals.”

“I think I have learned how to stay calm when skating in a really big arena,” added the teen from Salt Lake City, Utah. “I definitely need to work on my short program consistency, taking that same feeling I had today and bringing it into the short.”

Japan’s Satoko Miyahara finished fifth in the long program and overall with a tally of seven triple jumps, two of which were underrotated. Her intricate long program is set to Nino Rota’s Romeo and Juliet overlaid with Tomaso Albinoni’s Adagio, but in places it looked like the skater is anxious to move faster and with more attack than her music either allows or demands. She picked up 108.14 for the segment, and 157.74 overall.

“In short program I was very nervous, then in free program, I managed to put my emotions under control,” said the Japanese Junior champion. “It’s the Grand Prix Final, and I’m privileged to take part in this event, so I wanted to perform the best performance I can.”

“I think one of the best elements in my performance today was the triple-triple (Lutz-toeloop),” said the 14-year-old. “I think I’ve manage to put all my energy into the performance. The fighting spirit actually overcame the tensions I had before. I pretended this was practice, not the competition, in order not to get nervous. My coach told me to have fun and do my best at the Olympic venue.”

USA’s Leah Keiser remained in the sixth place with a performance that had four clean triples and three flawed ones. She crashed on her opening triple Lutz-triple toe loop combination, in which the last jump was downgraded. She recovered to produce a double Axel-triple toe loop combination, but then popped a triple loop into a single. She picked up 90.21 points for the free and 137.44 overall.

“The biggest disappointment for me in this program is the loop,” said the 15-year-old. “I haven’t even tried it, but it’s a good learning experience for me. It is my first big international competition and it definitely did not go the way I wanted it to, but it gives me a lot of things to work on for the next season, even for Nationals.”

“I train with her and she is really great,” she said. “She is always working and her best quality is… I mean she has everything, but… is her components [scores]. She is always in contact with the audience and it is something I can learn from her everyday.”