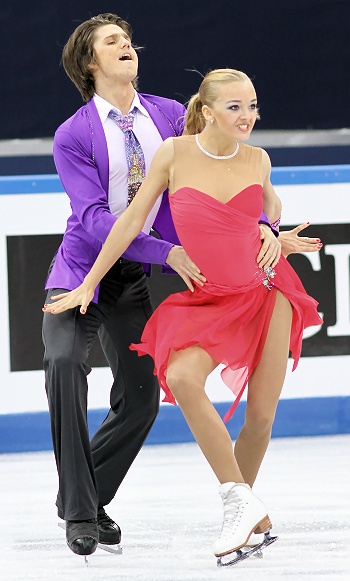 The 2012-13 ISU Junior and Senior Grand Prix Final of Figure Skating continued on Thursday with the Junior Short Dance.

Alexandra Stepanova and Ivan Bukin of Russia achieved another impressive victory by finishing six points ahead of the their closest rivals, France’s Gabriella Papadakis and Guillaume Cizeron, while teammates Anna Yanovskaya and Sergey Mozgov finished third.

The 2012 World Junior silver medalists were one of the few teams to avoid getting a level one for any of their elements. They met five out of six key points in their Blue Patterns, and a level two on their circular steps. Their level four straight line lift and twizzles were strong, and earned many positive Grades of Execution (GOE).

“We changed the lift (which was only level two at the first event), and I think the compulsory dance improved a lot,” said Stepanova. “We’ve worked on all aspects that we made mistakes on in earlier events.”

“We did not expect this high score,” said Stepanova. “We hoped to get it at our previous events, but we failed to get good levels on some elements earlier. The panel didn’t count a position in the lift (in Turkey) or we got a lower level for the twizzles (in Germany). Honestly, we did not expect such a big lead here.”

Twizzles are a bit of a sensitive issue for Stepanova, 17, and Bukin, 19. The team stood in fourth going into the Free Dance at last year’s Junior Grand Prix Final due to a mistake on that element.

“Last year, I probably was too nervous,” explained Bukin, “but now I am approaching everything calmer and it is going better. I think I worked a lot on myself in the past year. I must admit, I was nervous about the twizzles, but as you could see, I was able to cope with it.”

The students of Alexander Svinin and Irina Zhuk were fast and expressive, delivering one of the most convincing combinations of swing and blues. They thanked the audience for the support, which was quite loud and enthusiastic.

The French team failed to pick up desired levels for their Blues pattern sequences, which were graded level one and two, and only met one out of the six key points.

“We skated well, although we had several minor mistakes,” admitted 17-year-old Papadakis.

The Junior Grand Prix Final debutants picked up 54.79 (26.35/28.44) points for their upbeat and entertaining combination to Minnie the Moocher and The Dirty Boogie.

The team, which relocated to Lyon to train with Muriel Zazoui last summer, improved their results noticeably, but the dancers attribute it more to a natural progress of their skating skills rather than to a change of coaches.

“We have been training together for a long time, and it is only natural that we achieved some progress,” explained Papadakis, whose mother, Catherine, used to be their main coach and remains their choreographer and a part of the coaching team. “We have been on a substitute list for two years, so it is natural that we have finally made it. To be in the first Junior Grand Prix Final is already a victory for us.”

They do realize, however, that they still have a long way to go.

“I do not think that we can challenge Nathalie Pechalat and Fabian Bourzat at the moment,” admitted Cizeron, 18. “They are the best skaters in France, much better than us.”

Competing in Sochi adds an extra motivation for the three-time and current French Master’s Junior champions, however.

“For us, it is a great experience to skate here,” explained 17-year-old Papadakis. “Who knows, maybe next year we could try to come here again to compete at the Olympic Games.”

Yanovskaya and Mozgov seemed to have finally put a less than auspicious beginning of the season behind them. While they did not get any level ones, they only earned a level three for the twizzle sequence and one of Blues patterns, and a level two for the circular steps sequence.

The students of Elena Kustarova and Svetlana Alexeeva changed the first half of their short dance for the Final. They picked up a different tune for the Blues and moved both sequences of the pattern dance right to the beginning of the routine. The change helped them to obtain a level four for the opening sequence.

“We changed our music and the layout of elements in our short dance because that was our coaches’ wish,” explained Mozgov. “We actually like the second version more. I believe that the dance looks better this way. It became easier, better, and more comfortable to perform.”

“We have improved our choreography, I think,” he added. “On our technique as well as our artistry.”

“That was good enough,” agreed his partner. “We have done everything we could. Having the competition at the Olympic rink in Russia is really pushing us.”

One of the front-runners of the event, USA’s Alexandra Aldridge and Daniel Eaton, who won both their qualifying events this fall, only earned a level four on their final rotation lift, and ended up with the lowest technical score of the night. They did, however, picked up the second highest program components score for their Swing/Blues combination in which the opening fast section expertly set the mood for the dance.

“We skated really strong. We really connected on the ice,” said 20-year-old Eaton. “We feel we skated really good and I don’t think we could change anything if we wanted to.”

“I think everyone has been scoring a little low,” he added. “I don’t think anyone’s beaten their season’s best yet. It’s not like it was a one shot deal. We skated strong and we scored the way that the judges and the panel scored it. We’re in Sochi, it’s the Final. The toughest competition of the season.”

They are not too concerned about the placement, however.

“Everyone at home calls us the “comeback kids,”” Eaton explained. “In Lake Placid we were behind six points and pulled back 7.5 in the free dance.”

“We’re notorious for coming back,” agreed Aldridge, 18. “This time it’s not going to be any different. We’re going to be strong and we’re going to come back from this. Our goal for tomorrow is to skate our free dance how we’ve done every single day in practice, and just skate together as one and give the crowd something to be excited over.”

Russia’s Evgenia Kosigina and Nikolai Miroshkin also failed to impress the technical panel with their execution of the required elements. The team from Odintsovo only earned a level four on their curve lift. They scored 50.45 points to edge out teammates Valeria Zenkova and Valerie Sinitsin (50.39) for fifth place.

“We felt that we skated well, but we made some little mistakes, so we got pretty low marks,” said Kosigina, “especially in the levels of the pattern dance.”

“Now our goal is to please the audience with our Free Dance. At least a little bit,” she joked. “Maybe for a minute or so… it would really be good. Not what I want the other couple of minutes of our program to be sad.”

“Obviously, we still have room to improve,” added Moroshkin. “Maybe we have to work more on the pattern dance, but it feels like we are working on it all the time anyway. So maybe, in fact, we have to work less on it. We got levels four for the pattern at the JGP event in Lake Placid, but not since. It is possible that we have been skating it so often that we lost our feeling of it.”

“I think our performance was not bad, but I’m a bit disappointed with the scores,” said Zenkova. “They could have been higher. We need to be more relaxed and more into dance and pace.”