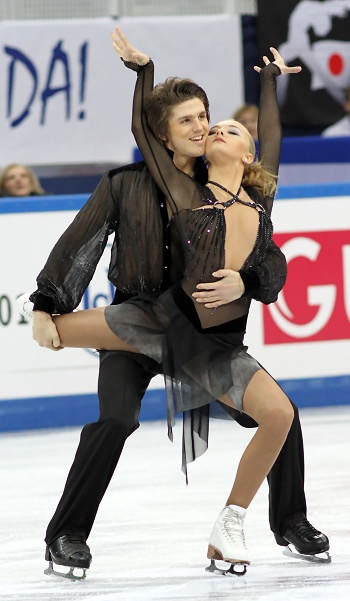 Alexandra Stepanova and Ivan Bukin won Russia its second medal of the 2012-13 ISU Junior and Senior Grand Prix Final of Figure Skating when they outclassed the rivals in the Junior Free Dance event to finish 10 points ahead of France’s Gabriella Papadakis and Guillaume Cizeron.

USA’s Alexandra Aldridge and Daniel Eaton stayed true to their nickname of the “comeback” kids, moving up one spot to capture the bronze.

Stepanova and Bukin admitted at the press conference that they had expected to become the leading Junior dance team this year since last season’s champions moved up to the Senior ranks. They were even “a bit disappointed” when their coach told them early in the season that now they have to work “300 times as hard” as they did before.

While the 2012 World Junior silver medalists were gracious at the press conference, saying that everyone has improved a lot and that rivalry was much stronger than expected, the students of Irina Zhuk and Alexander Svinin had no trouble scoring the highest sums of points for both technique (42.21) and program components (46.18) to finish first in the free dance (88.39) and overall (149.57).

The Russians were quite humble in their assessment of their performance.

“I think we skated better in practice. Today it was quite hard to skate,” said Stepanova, 17.

However, they were more audacious in their choice of music, choosing Maurice Ravel’s Bolero, one of the most well-known pieces in ice dancing. While in no way comparable to Jane Torvill and Christopher Dean’s interpretation of the tune, the teens were quite intense, dedicating their take on the modern arrangement of the music and displaying strong skating skills.

“It felt really positive,” said Bukin, 19. “The audience was awesome. They supported us so well and this really helps. It was a good performance, but not our best yet.”

Papadakis and Cizeron also invited comparison to more renown skaters as they have chosen Money by Pink Floyd for their dance, the tune used by Tessa Virtue and Scott Moir for their pre-Olympic free dance back in 2009.

The students of Muriel Zazoui and Romain Haguenauer coped well with both the technical and presentation aspect of their dance to finish a solid second with 84.42 (40.14/44.28) points, their new personal best. Their total score was 139.21.

The team from Clermont-Ferrand was satisfied with their performance, but are already looking forward to the next challenge.

“We did everything we could and without mistakes,” said 18-year-old Cizeron.

“The Russian team also skated without mistakes, very clean and a strong performance,” he added about the rivals, whom they followed closely from the kiss-n-cry area. “We hope to beat them at the World (Junior) Championships.”

The French also believe that it is beneficial for them to see top Senior skaters competing at the same event.

“This is our last season competing in Juniors,” explained Papadakis, 17, “so it gives us a chance to watch the top skaters and better prepare for our debut in the senior ranks next season.”

The dance, created by Anjelika Krylova and Pasquale Camerlengo, was the most comprehensive effort of the day in which even the most run-of-the-mill moves like twizzles are stylized to match its Jewish character.

“I think we managed to come back,” said Eaton, 20. “The performance was strong, we skated clean. I think we are both really happy with the way we performed. It was definitely a strong program. I think all the elements were pretty strong. We maintained speed and we have the connection through every element.”

“This free dance was really important because of how disappointed we were after the short dance,” added Aldridge, 18. “Not so much with the way we skated and performed, just with our score. So we wanted to show the judges, the panel, and the crowd that we are a strong team technically and emotionally, and that we can have high levels and still have a high performance. I think we did this today.”

The team is now looking forward to improving on their last season Junior Worlds results, where they took the bronze.

“We know what it’s like to be there,” explained Eaton, “so we will be a lot more comfortable on the ice. We should build on this performance to deliver the best performance of the season.”

Overall, the experience was really enjoyable for the US Junior champions.

“The Grand Prix (Final) is one of my favorites,” said Aldridge. “I love this environment. It’s very motivating to see the seniors skate on the same rink. This year, we decided to stay in the junior ranks and I think it should give us more confidence going into next season.”

“It’s awesome, a once in a life opportunity to compete with the best,” her partner agreed. “Especially here in the Olympic arena.”

Even though they entered the season as one of the main contenders for the Junior Worlds title, the Americans say there is no extra pressure.

“Regardless of what level you are, what competition you are doing, there will always be pressure on you,” said Aldridge. “It is just a matter of how you handle it. These high level competitions, they are just preparing us, they teach us. It’s not so much about placement, but that we are growing as a team.”

Anna Yanovskaya and Sergey Mozgov of Russia slipped to fourth place after a disappointing performance. The team only earned a level two for their spin and both step sequences to score 76.28 (36.33/39.95) points. They received 129.31 points in total.

“We did everything we could,” lamented Mozgov, 17. “We tried our best, but it came out like this.”

The defending silver medalists feel that a lot has changed for them since their success at the last season’s Junior Grand Prix Final.

“Of course nobody expected this,” said Yanovskaya. “Such a [placement] is unusual, such a shot, a team from nowhere. People were shocked by our whole year. We trained for this.”

“We started to watch ourselves more,” added her partner. “We are being watched more this season. There is more pressure and the competitors have become better.”

Teammates Valeria Zenkova, 17, and Valerie Sinitsin, 20, pulled up one spot with a cute and entertaining dance to Andrew Lloyd Webber’s Cats. They scored 124.19 for both programs.

“We are happy with the program,” said Zenkova. “We did everything that we planned. We’ve watched the musical many times and enjoyed it.”

Their coach, however, was a bit more critical.

“He told us we need more speed and to skate faster,” said Zenkova. “We will work a lot. We will change some elements to equal them to our strength. This season we worked a lot of lifts. We have a new coach for lifts now, Dima Ionov. He invented many new lifts for us. Our skating also improved, I hope.”

“We lost a level on a lift because I couldn’t catch my leg,” said Kosigina. “Of course we’re upset, very upset. We were not so frustrated yesterday, so it didn’t affect us on this performance. Today we were practicing as usual, prepared and warmed up. We were really ready. I don’t know what it was. Maybe just an accident.”