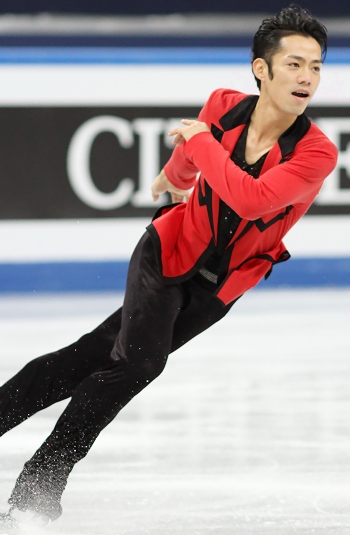 Daisuke Takahashi of Japan performs to a “Rock ‘n’ Roll” medley at the 2012-13 Grand Prix Final of Figure Skating.

Japan’s Daisuke Takahashi was the only competitor in the Men’s Short Program at the 2012-13 ISU Grand Prix Final of Figure Skating to avoid making any mistakes. Consequently, the 2010 World Champion finished first ahead of Canada’s Patrick Chan, while teammate Yuzuru Hanyu placed third.

Takahashi’s Rock’n’Roll medley was an instant hit with the crowd, who supported the skater throughout the routine. The skater himself was probably more earnest than ever in his interpretation, which required him to pretend that he was having a blast.

The Olympic bronze medalist didn’t put a foot wrong in the entire program, nailing both the opening quad toe and the triple Axel in the second half of the routine. He scored a new season’s best of 92.29 (49.15/43.14), and became the only skater to receive more than 90 points.

“This is the first time I was able to do a (clean) quad (toeloop) in my short program this season, so I’m happy,” said the 26-year-old. “A lot of Japanese fans have come here, so it helped me a lot in my program.”

“For the past few days, I haven’t had the best conditions,” he explained, “but I think my overall practice has produced the outcome, and I’m feeling that I’ve grown to do this.”

The student of Nikolai Morozov and Utako Nagamitsu did not put a lot of effort in researching the history of the theme, however.

“I didn’t even look on Youtube at past performances or anything like that,” said the skater from Osaka. “I was focusing on my image of “Rock-n-Roll,” and I was more careful about each element because the overall performance depends on each element.”

Chan also landed his opening quad, but did not add the planned triple toe to it. He later doubled his triple Lutz, but was able to turn it into a triple-double combination.

“It was a great quad toe,” the two-time and current World champion told the press. “It should have been a quad toe-triple toe, which is how I train it. Sometimes you do not have the best of speed coming into the first jump. I had to kind of think on my feet. The last triple jump did not have enough speed going into it, and was a bit too far down the ice, but I stayed on my feet and I am happy with my performance.”

His interpretation of Rachmaninov’s music was not as strong as usual, and rather subdued the exuberant audience into silence.

“Today was a good day for me,” said the 21-year-old. “For the first time I’ve done such a beautiful triple Axel. Overall, I’m pretty happy with my program.”

Chan is quite happy with this placement as well.

“I think this is where I want to be,” he claimed. “Three points is not a lot in Men’s singles, unlike Ice Dancing. It is really easy to make up, and for once, I do not have to skate last in the group, which is great. So I feel really good.”

The defending champion loves the chance to visit a future site of the Olympic Games, and enjoys competing in Sochi.

“It is the first Grand Prix Final that did not feel like a Grand Prix Final,” he said. “It feels like a completely different event that I have never been to before. It’s right next to the Olympic park, which is being built as we speak. It’s almost like an Olympic treatment, having buses (for skaters) with police escort.”

The only thing he found distracting were the palm trees on the streets.

“I try to put palm trees out of my mind,” said the skater who trains in Colorado Springs. “For me, palm trees mean vacations. However, I love the sea here. Kathy (Johnson, his coach) and I go to the water everyday just to watch the waves crashing. I love it, it is so different. It is very calming. I have really good feeling about this place.”

Hanyu has twice improved the highest score for the Men’s Short Program this year, and skating on his birthday he was in the excellent position to give himself a memorable present. Unfortunately, it was not to be. The 18-year-old had to fight for the landing of his opening quad toe loop, and later fell on an underrotated triple toe loop at the end of a triple Lutz. With 87.17 (46.76/41.41) points, however, he is still in the contest for the medal.

“This was the first time I made a mistake in my short program (in the Grand Prix) because I was a bit nervous,” said the World Junior bronze medalist. “I’m only five points (behind) in third place, so tomorrow I’m going to change my mind set and skate like an 18-year-old.”

“Today, I was just focusing on the Grand Prix Final and was trying to beat my own (points) record,” the skater admitted. “I couldn’t do it and I regret that. I was quite confident going in there, but I learned today that you don’t always have no mistakes, perfect skating.”

However, not every impression was negative for the Japanese Junior champion.

“I was able to nail my Axel,” he said. “My steps were level four, so I think it was a good experience for me. I learned a lot. I had relatively less speed today, but that is because I’m a little bit tired. I will change my mindset tomorrow. I want to get a medal. That is what I was thinking of since last season. I don’t want to make any mistakes in my jumps tomorrow. If you make any mistakes in your jumps like I did in the short program, it affects your scores greatly.”

“I was able to land the quad, but my Axel didn’t work that well,” admitted the student of Nobuo Sato. “When I was in the air, I felt that the rotation was a little bit lacking, so it ended up as a fall. It was a pity. I was able to renew my personal best, so I think there is room for better scores.”

In contrast, Spain’s Javier Fernandez fell on his quad attempt, but was able to pull himself together and deliver the rest of the elements in his “Mask of Zorro” routine. With low levels of difficulty, however, he had to settle for a distant fifth, though (80.19).

“My goal for the free skate is to practice and give one hundred percent of what I have in my body tomorrow,” said the student of Brian Orser. “I will try to be as high as I can, but I’m not going to say absolutely to anything else. I don’t want to speculate on it. It’s a pleasure to be here with the six best skaters in the world.”

Most of the skaters admit that it is nice to have a chance to try out the future Olympic venue, but there is more to Sochi than that.

“For me to be here is a pleasure,” said Fernandez. “When I came here and saw this weather, I was actually a little bit surprised because I haven’t been here before and I wasn’t expecting this. I absolutely don’t mind warm weather.”

Japan’s Tatsuki Machida, who is making his Grand Prix debut, was unable to cope with the pressure. He is sixth with 70.58 points.

“I was anxious and couldn’t concentrate on the Axel,” said the 22-year-old regarding the jump he fell on. “I thought too much about getting the jumps right and that made me mess up. I need to rest tomorrow and concentrate and not be anxious.”