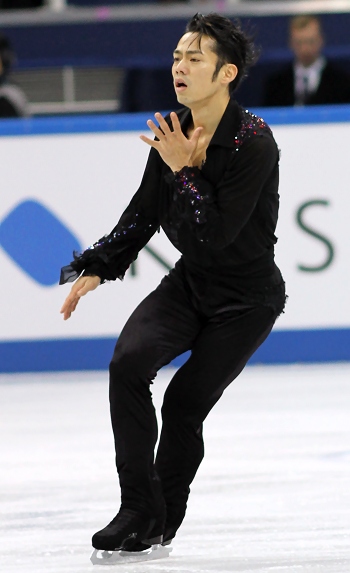 Japan’s Daisuke Takahashi performs to Leoncavallo’s “I Pagliacci” at the 2012-13 Grand Prix Final of Figure Skating.

The skater first qualified for the event back in the 2005-06 season, and except for the 2008-09 season that he missed entirely due to an injury, has been a fixture ever since. Teammate Yuzuru Hanyu won the silver, while Patrick Chan of Canada slipped to third place.

The true hero of the evening, however, was Spain’s Javier Fernandez, who nailed his program in a spectacular fashion, but had to settle for fourth place by a negligible margin of 0.04 points.

The best aspect of Takahashi’s performance to Leoncavallo’s I Pagliacci was his soulful interpretation of the famous music. Technically, however, it was fairly uneven.

The 2010 World Champion fell on his opening quad toe loop, and while he nailed the second one, his triple toe loop in combination was underrotated. He also stumbled out of triple Axel-double toe in the second half of the program, and the landing of his first triple Axel was rather tight.

The skater admits that he has mixed feelings about the outcome.

“I am very happy that it’s a gold medal,” he said, “but as a performance, I am not satisfied. It wasn’t that good. I am happy that I was able to land the second quad for the first time since my injury. Accuracy in my quads improved after my injury, but I lack confidence.”

Competing against three of his teammates did not bother the student of Nikolai Morozov and Utako Nagamitsu.

“It almost looks like Japanese Nationals,” he admits, “but in this competition, I was focused on my own performance. Whether it was the Japanese or the other nationalities, I wasn’t thinking about the other skaters. I was concentrating on how to get my jumps done.”

“It was a good experience but there are lots of challenges that remain,” he summed up.

The next challenge is the Japanese Nationals in ten days time.

“I am concerned about my stamina,” admitted the 26-year-old. “I shouldn’t work too hard. I need to adjust my performance and hopefully, nail the two quads and improve my Axels. All the skaters are growing and outpacing me in terms of growth. I will try to achieve a higher level of performance and growth.”

Nevertheless, the Olympic bronze medalist is prepared for anything.

“Plushenko is a bit of a dark horse in this big race,” he said when asked about the 2010 Olympic Champion comeback. “It’s a bit scary. He’s going to be 31 and he’s been at the front line for a long time. He always overcomes all these barriers. I will be 27 when the Sochi Olympics come around. I’m looking forward to it if he will kindly accept me as a rival.”

Hanyu got the second highest technical score and fourth highest program components score to finish second in the free program and overall. He only made one mistake in his performance in which he doubled his planned quad Salchow, but it was enough to put him behind Fernandez in this portion of the competition. He earned 177.12 (91.96/85.16) for the free and 264.29 in total.

“I landed the first quad but I failed the second one,” stated the 18-year-old. “I felt really tired after I landed the quad toe. Even with the good program, I wasn’t number one in free (skating). I do have my regrets.”

“I was able to skate well until the very end,” continued the student of Brian Orser, “but I still feel more of a regret than being able to finish everything. Of course a medal is a good thing, and I should be happy, but when I look at today’s performers, Javier beat me. That’s a pity.”

Even though his mistakes spoiled his impression of being at the sight of the future Olympic Games, the 2012 World Championships bronze medalist plans to capitalize on them.

“Sochi is now associated with lots of regrets and mistakes,” said the Japanese Junior champion, “but those memories are going to help me to prepare for the big stage. I want to overcome all of my regrets by being stronger.”

“It was reassuring to have many other Japanese in the Final,” he added. “It was nice to have the older guys here with us. I am looking forward to catching up to them and maybe someday beating them. We were able to talk in Japanese, and that contributed to the good performance for all of us.”

Like Takahashi, Hanyu is also heading to the Japanese Nationals, but he does not expect to work hard in the interim.

“Rather than working really hard, I need to work on controlling my mental aspect, as well as making sure I am getting enough rest,” he said.

The skater from Sendai admits that it is weird to contemplate a possibility of competing against Evgeni Plushenko.

“I partly started skating because of Plushenko,” he explained. “I would love to skate with him, but at the same time I don’t want to skate with him. I hope that I will be strong enough to compete against him.”

Chan, who won the two previous Finals, was unable to repeat his success this year. Even though he earned the highest program components scores of the night for his inspired interpretation of La Boheme, the skater, who often speaks of his competitions as ongoing “learning experience,” obtained a new homework assignment in Sochi.

The Canadian champion fell on the opening quad toe loop, but recovered to land the next. He continued to deliver his jumps as planned, until he suddenly decided to add a double toe loop to his final double Axel. As a result, the final combination was nixed as it was his fourth one (the rules allow only for three).

“Well, technically I have not done four,” said the skater in the mixed zone, referring to the fact that his first ‘combination’ was, in fact, his solo quad.

To give skaters a benefit of a doubt, the callers are instructed to assume that a repeated quad or a triple is in fact a part of a sequence that did not come out right, rather than just a repeated solo jump, which is explicitly prohibited by the rules.

“I pulled a Nobunari,” joked the Canadian, in reference to Japan’s Nobunari Oda, who has made the same mistake on more than one occasion.”Now that I know (about the additional combo), I will not do it again.”

“It is so complicated. What has happened to just having fun?” lamented the World champion.

Despite having to settle for bronze this year, the 21-year-old sees a lot positive things in his performance.

“I am quite happy with the program,” he said. “Looking at it, there were a lot of good things, the triple Axel, the triple loop. I am a little bit disappointed in myself, especially in the first quad, which is normally pretty much automatic.”

“I need to focus on the pattern of my jumps, especially the first quad,” Chan noted. “I did not do that, but the rest of the program was quite good. There is of course still a lot of work to do. I will put it behind me and I will go on. And congratulations to Daisuke.”

“A lot of critics were upset that I was getting rewarded for elements that weren’t executed well,” he added about his score, “so hopefully that will please some people.”

Meanwhile, the skater revels in a challenge, but only to an extent as he is looking forward to taking a break from skating.

“The year after the Olympics, I improved a lot and was motivated to be better than anyone else,” he told the press. “I was missing that drive to improve and be better. A lot more skaters are doing quads, [sometimes] two quads in the program. The year I won Worlds in Moscow and Worlds in Nice, a lot less skaters were doing two quads. The boundaries have been pushed, especially this year. Pressure has risen and we have very good quality skaters.”

“I am glad I’m not going to the Japanese Nationals,” joked the Canadian. “I don’t have six men with a target on my back chasing me for the world team spot. I will take time to go back to Toronto and enjoy the holidays.”

“I feel like a lazy bum next to these guys,” he added, “but this is what my body needs. I’m going to get away from the rink. Nationals will be in January and I’m going to go and have fun. It’s a good chance to hone in on my skills and not make the same mistakes I did here.”

Fernandez delivered the program of his career to win the free skating portion of the event by a margin of 1.3 points. Three quad jumps (a toe and two Salchows), a triple Axel, and five more triples were worth 178.43 (95.93/82.50). The Spaniard’s only mistake was doubling a triple loop. He got 258.62 in total.

“I tried a triple Axel and it was not coming,” said the student of Brian Orser about his jump layout, “so I started working on the quads in practice last season. This season I’m doing it in competition. Of course, I’m very happy with tonight’s performance.”

The skater is aware that he is a sole European in the Final, but tries not to get ahead of himself.

“It doesn’t make me the favorite (to win the European championships),” acknowledged the 21-year-old. “Last season, I was the only European to skate at the Grand Prix Final and then I couldn’t make the podium at the Europeans.”

“In both the short and free programs, the first jump was ok, but the next ones were not good,” observed the 23-year-old. “Anyway, I tried to be strong and made a good recovery in the second half. Now I just want to practice more. It’s my first (Grand Prix) Final in two years.”

“I’ve learned some good things and some challenges I need to work on,” added the former Japanese champion. “This new experience in Russia has given me good homework. I know how to prepare for the Olympics in 2014. This ice doesn’t allow you to jump your Axels on the very edge, and you have to watch out a little bit.”

Teammate and Grand Prix Final debutant Tatsuki Machida was out-classed in this field to finish last with 198.63 points. Only half of the eight jumping passes in his free program to Firebird were clean.

“It was my first final,” said the 22-year-old. “I thought that it might be a bit easy to compete among such good skaters, like it was at the other two Grand Prix series, so I was light-hearted. It turned out that at the moment when I came here, it was a different picture. I found it very difficult to compete compared to the ordinary Grand Prix events.”