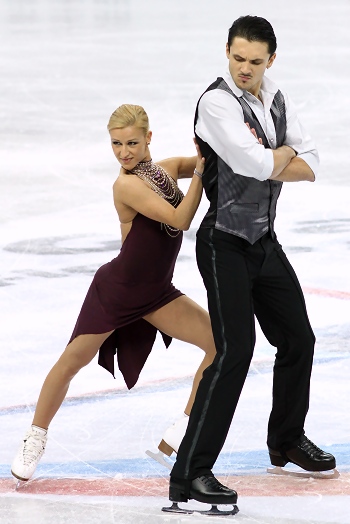 Tatiana Volosozhar and Maxim Trankov of Russia perform to music from “The Godfather” soundtrack at the 2012-13 Grand Prix Final.

Tatiana Volosozhar and Maxim Trankov of Russia won the first stage of the Pair Skating event at the 2012-13 ISU Grand Prix Final of Figure Skating, however, the gap between them and their teammates Vera Bazarova and Yuri Larionov is smaller than ever. China’s Qing Pang and Jian Tong are currently third.

Skating last, Volosozhar, 26, and Trankov, 29, capped the second day of the competition with a strong performance to a jazzy arrangement of Nino Rota’s Godfather soundtrack. The team electrified the audience, but the technical panel remained unmoved.

The 2012 World Championships silver medalists only earned a level one for their death spiral and a level three for their lift. Their triple twist, however, was rated level four, and they received 73.46 (37.53/35.93) points.

“We think we did a good job,” said Trankov. “We skated a clean program and we thought that we should deserve better marks for our performance. Somehow, we lost levels on the death spiral and the lift.”

“It made us unhappy,” he admitted. “Maybe the coaches will figure it out, but it really bothers us when we cannot understand why we get the levels we get. We already got a couple of low levels this year, but we always knew that we made mistakes. Now we feel that we have skated well and we got those levels and we do not know what to do, what we should work on.”

“Naturally, we wanted to set a new season’s best today,” added Volosozhar. “We failed by a pretty small margin. Overall, we are pleased with our performance.”

The team loves the fact that the hosts make up a half of the field in Pair Skating, and follows the Junior events closely.

“We are all on good terms (in Russian pair skating),” said Trankov. “Especially with the younger teams. With Vera (Bazarova) and Yuri (Larionov), we support each other all the time. I would like to use this opportunity to congratulate Maxim (Kovtun) and Vanya (Bukin) and Sasha (Stepanova) on their victories (in Junior Men and Junior Dance events, respectively).”

Bazarova, 19, and Larionov, 26, were also clean, but also only earned a level one for their death spiral. Despite the flaw, the team managed to score 70.14 (37.16/32.98) points, their new personal best, for an inspired and floating performance to Liebestraum by Franz Liszt. The team from Perm was very excited.

“We got 70 for the first time in our lives!” exclaimed Bazarova. “It’s amazing and we are very happy with our skating. Now it’s important to move ahead in this way.”

“Today, we were able to do everything well,” agreed her partner. “We added a bit of emotion. “We are happy and the coaches are happy. It’s nice that such a huge competition is happening in Sochi. Furthermore, it’s an Olympic rink. The impression is good and positive, and we like it all very much. As far as support goes, there weren’t that many people here, but it seemed like there were.”

They were pleased with everything about the event.

“Everything here is organized on a very high level,” said Larionov. “The housing and food, the rink… it’s comfortable and practical. There is a space where you can warm up, which is rare in other sports arenas. At first there was traffic, but now we sorted it out. It’s been fine, no delays.”

Pang, 32, and Tong, 33, finished third after both partners missed their side-by-side triple toe loops. Their performance to Scott & Fran’s Paso Doble was sharp and intense, but low technical scores kept them well below the leaders with 64.74 (32.06/32.68) points.

“The performance was not our best,” admitted Tong. “I had a fever and was lacking energy. There was one mistake on the jump, but the other elements were good.”

“Because of the traffic jams, we decided to come early to the ice rink,” added Pang, “so we had to wait for a long time and were a little tired. Hopefully, tomorrow we’ll skate better in the free skating.”

Canada’s Meagan Duhamel and Eric Radford, both 27, almost got their trademark side-by-side triple Lutzes this time, but Duhamel put a hand down on hers. Otherwise they were clean and solid, however, several elements were ranked level three, and most of their elements lacked the amplitude displayed by the top teams.

“We lost some levels and we’re not sure why,” mused Duhamel. “We clearly didn’t hold something long enough, so we’re going to have to go back and review it. It (64) is still a really high score for us, just below our season’s best. It’s still strong, so we’re still happy with that score.”

“The 5.3 we got for the Lutz is more than anybody’s jump is worth in this competition,” she added. “As long as we stand up and don’t fall on it, it’s worth more than other people’s jumps. Tomorrow we’ll get seven.”

“That’s a step up for us from last year,” he said about their score. “We are always more comfortable in the long program for whatever reason. We have an ultra high base mark in our long. We’re not planning on making errors, but if we have an error, we have a cushion. It’s a strong skate for us at a competition like this. We feel the pressure here a little more because we’re with the best teams.”

Even with the mistake and lower levels, the Canadian champions are nearly tied for the third place (64.20).

Teammates Kirsten Moore-Towers, 20, and Dylan Moscovitch, 28, struggled with their side-by-side triple toe loops, but were otherwise clean. They placed fifth with 60.95 points.

“Overall, it was a great short,” said Moore-Towers. “The speed and the performance was really good. All the elements felt strong, easy, and smooth. Obviously, there were mistakes.”

For Russia’s Yuko Kavaguti and Alexander Smirnov, their performance in Sochi was a program to forget. The students of Tamara Moskvina missed both side-by-side jumps, as well as the throw, and picked up only a level one for their death spiral.

“What happened?” responded Smirnov in the mixed zone. “I have the same question. I don’t know why, but we were too nervous. We haven’t had so many mistakes for a long time. We were practicing well and a lot. My right knee didn’t disturb me, so it has nothing to do with that. Anyway, we have one more day, and we’ll fight tomorrow and try to do it much better.”

“Everything was ok, we were practicing as usual,” added Kavaguti. “We felt the ice, but we should prepare emotionally in the beginning. I was calm, I didn’t feel nervous. That’s not Sasha’s or the rink’s fault, it’s mine. The only problem is inside the head.”