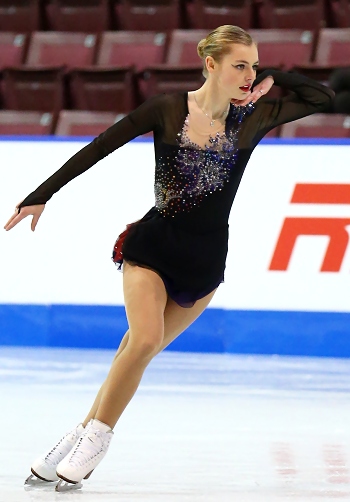 With one of the most exciting junior ladies free skates in years, short program leader Larkyn Austman (BC/YT) closed Wednesday’s competition with an exclamation point at the 2013 Canadian Tire National Figure Skating Championships. Marika Steward (NO) catapulted to second, while Madelyn Dunley (CO) maintained third to win the bronze.

Austman’s Danse Macabre program was peppered with triple jumps that were not only executed, but executed extremely well. She was thrilled with the biggest element in her program, the double Axel-triple toe loop combination, and so were the judges—one of which gave it a +3 Grade of Execution (GOE).

Only a messy landing on a double Axel late in the program marred an otherwise terrific skate, and she finished first in the long (100.97) and overall with over 25 points to spare (149.75) .

“I have trained the whole season for this,” the 14-year-old said just minutes after her performance, “and I’m just really glad that it actually happened. After the Axel-toe, it wasn’t smooth sailing, but I knew that I could do it.”

As the junior champion, Austman will have to move to the senior level next year. She has risen through the ranks quickly and has consistently increased her technical difficulty, so if she continues to do that, she could make a splash next year.

Equally as happy as Austman was the Steward. After missing out on even qualifying for the Canadian Championships last year, finishing on the podium was beyond even her own expectations.

Steward’s program was not perfect, and she doubled her intended triple flip, a jump that she got in the short program, but it was enough to vault her from sixth to second.

“It’s an amazing feeling,” Steward said. “I didn’t think I could do it [coming from sixth to medal], but I did, and it’s a dream come true, really.”

Steward, who trains most of the year at her home in Sendai, Japan, with Nanami Abe, is always happy to return to Canada and would love the chance to represent the country of her birth internationally, if given the opportunity in the future.

“It really is one of my dreams,” she said regarding the idea of representing Canada. “It’s been my dream since I first started skating, so if the opportunity comes, I will definitely take it.”

Dunley, the bronze medalist, also made a big jump to the podium, skating from the penultimate flight. Like Austman, she successfully completed a double Axel-triple toe loop combination, which is one that many senior competitors at this event do not even have.

The 15-year-old also landed a strong triple Lutz, which elicited a big cheer from the home crowd. Always an intense performer, it seemed Dunley got overconfident after the big jumps were done, resulting in a stumble on a transition and a subsequent fall on a triple toe loop. After the mistakes, she reeled her nerves back in and finished well with 79.52 point for her effort. Her total score was 122.04.

Dunley was the Canadian novice champion last year, while Austman was second. All three medalists are part of a revival of Canadian ladies skating that is beginning to move through the ranks.

In perhaps the most heartbreaking moment of the evening, Natasha Purich (AB/NT/NU), who was second after the short program, slipped to fourth, less than a quarter of a point from the podium.

Purich’s program was not without struggles—she fell on a triple toe loop and stumbled out of a triple Salchow around the midway point of her program, but her fighting spirit came out so strongly in her tango free skate, that she left the ice shrugging her shoulders and smiling, with big hugs for her coaches.

It wasn’t until she saw how close she had been to a medal that the smile turned to tears for the passionate 17-year-old who is known for wearing her heart on her sleeve. Although missing the podium by such a small margin was disappointing, the night was not completely lost for Purich—she stood on the podium for junior pairs just a few minutes later.

Marianne Rioux Ouellet (QC) also moved up from the second warm up group to finish fifth (121.85). She landed four triples in her Sense & Sensibility free skate, including a triple flip that was a bit tight, but fully rotated. In particular, Rioux Ouellet has softened her skating since last season, when she was fourth at the novice level.