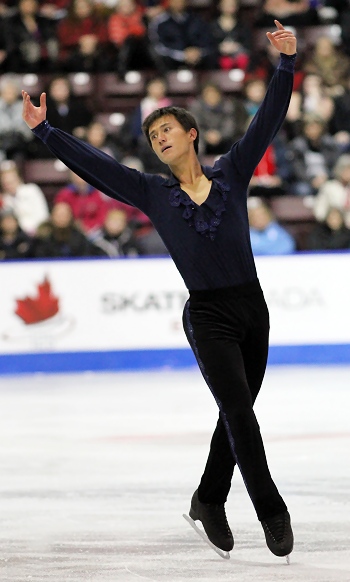 The leader after the men’s short program at the 2013 Canadian Tire National Figure Skating Championships was anything but a surprise. Patrick Chan, the two-time world champion, established a huge lead over the rest of the field, while Kevin Reynolds (BC/YT) and Liam Firus (BC/YT) placed second and third, respectively.

By his standards, Chan’s program was successful, but not perfect.

“I talked to Elvis [Stojko] before this, and he said, ‘You have to strive for success, not perfection,'” Chan said, “and I think this was a perfect example. It wasn’t perfect, it wasn’t the best landings on all the jumps, but I got my job done. I went out and stayed on my feet. This is a good boost for Worlds in London.”

His opening quadruple toe loop felt just a hair off, and Chan hesitated, choosing to add the combination jump at the end of his program instead of risking a mistake at the beginning. He then tried to add a triple toe loop to the end of his triple Lutz out of steps, but only had enough flow for a double, which was the main noticeable error in his program.

“I’d been working a lot on the quad toe-triple toe after what happened at the Grand Prix Final, when I singled it,” Chan said. “On second thought, maybe I could have done it here. The Lutz was a bit shaky. The steps going into it, I’m going to have look at them. I felt a little off-balance, didn’t have enough speed as I like to.”

Chan’s flow and overall skating could not be denied, though, and once again, the 22-year-old’s component marks were very high. He received a 10.00 from one judge for choreography/composition, and the majority of the rest of his marks were above 9.00 in his score of 94.63 points.

With two quadruple jumps to his credit, Reynolds is in second place with a score of 85.32. The 22-year-old was the first skater to ever land two quads in the short program, at 2010 Skate Canada, but injuries have prevented him from going for two quads since then.

“I’ve been planning to do a second quad in the short, if the first combination and the triple Axel goes as planned,” Reynolds explained. “Trying to up the ante a little bit. Hopefully, this was good experience for the Four Continents and the World Championships.”

Although he did struggle a little with the second quad, the toe loop, he performed his Chambermaid Swing program well. It is his second year with this program, and he appears to be extremely comfortable with it. The athletic skater has worked a lot on his choreography and presentation in the past few years, but the judges are still not in consensus about his progress—his interpretation marks ranged from 6.50 to 8.75.

This short program was particularly sweet for Firus, who landed his best triple Axel in competition yet.

“I landed it once before, in Salt Lake City, but that was a step-out,” Firus said. “This was the first solid, one-foot landing in competition. This week has been great for the triple Axel.”

At these championships, the jump earned a majority of +2 marks from the judges and had excellent height and flow. With the most difficult behind him, Firus sailed through the rest of his program and performed joyfully. His basic skating is excellent, and he reminds many people of Chan when he was younger.

Firus’ success in the short program was a surprise, even to himself, as he has a groin injury and has not been able to train with his usual consistency since Skate Canada. However, the 20-year-old has been feeling much better heading into these championships.

2011 World Junior champion Andrei Rogozine (CO) delivered a clean short program, aside from a bobble on his triple Axel, and sits in fourth place (70.42). Breaking 70 points at this level was an excellent achievement for Rogozine, who was able to really get into his performance.

With high levels on his non-jump elements, the 19-year-old is still in fighting-range for a medal in the free skate, although he needs to skate with a bit more security so that the judges can award him higher Grades of Execution (GOE) marks.

After a huge opening triple Axel, Elladj Baldé (QC) unfortunately lost focus and fell on the following jump a triple Lutz. He is normally such a crowd-pleasing skater, but his performance felt a bit flat after the mistake, and even during his circular footwork, the audience did not seem as engaged as they usually do.

The 22-year-old also lost a few points on his flying sit spin, which was only called a level 1, and scored 68.47 points.

Former national champion Emanuel Sandhu (BC/YT), competing in these championships simply for the love of the sport, is in ninth (60.42) after a fairly clean skate, though it was one with mediocre levels.