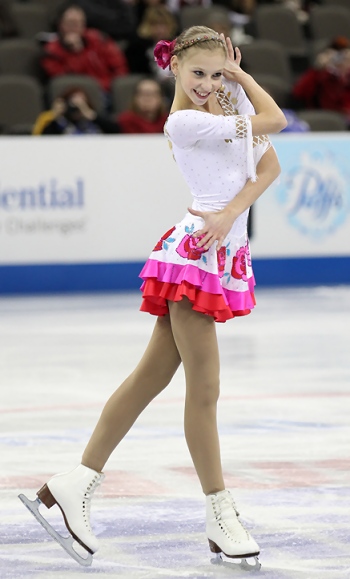 Polina Edmunds performs her Short Program at the 2013 US National Figure Skating Championships.

Polina Edmunds is ambitious. You could see it in her eyes the moment she took to the ice for her short program in the junior ladies competition at the 2013 Prudential U.S. National Figure Skating Championships.

The last skater of the night, the 14-year-old went for broke, and came away as the leader heading into the short program.

“I was really happy—I did my best,” said the statuesque Edmonds. “I had kind of a shaky warm up, but that’s okay because I would rather have it then than in the actual competition. I thought I did the best that I could do.”

The San Jose, Calif., missed her chance at hometown glory a year ago when she performed a subpar free skate after finishing in third place in the short program in this event. So she decided to change her fate, and recommitted herself to training for success.

“Last year I wasn’t really well trained—I was kind of slacking off all season,” Edmonds revealed. “I went into the short and did really well, and that was kind of luck because I think it was the only time that I skated a clean short all year.”

“This year, I feel a lot better trained,” she said. “I learned a lot from last year’s experience because I kind of bombed my long last year. This year I know that I really need to focus throughout the week, and I know that it will be better.”

The plan worked. Edmonds skated the best national championships program of her short career, and was rewarded with 58.17 points for her Russian Gypsy Folk short program. The highlight was a triple Lutz-triple toe loop combination that earned the leader a whopping 10.80 points.

“I’m not really focused on landing on the podium, or finishing in first, second, or third,” she said. “I’m just focused on two great programs, doing my best, and showing the judges what I can do.”

Finishing just behind Edmonds was 16-year-old Mariah Bell, fifth a year ago, who is skating with a similar hunger for success.

While Bell did not have a triple-triple combination in her Scottish Fantasy in E-flat major routine, what she did do was clean as a whistle. The Westminster, Colo., native landed a beautiful triple Lutz-double toe combination and a strong triple flip to open.

“I was at junior last year, and I think that I matured so much since then—especially in the daily training,” Bell admitted. “Last year I allowed myself to get nervous, but I have to remember that it’s just a sport. I love it, but it’s just a sport. [Competing] is something that I have to get used to because I do it in practice, and it’s no different here.”

Bell is within striking range of Edmonds, earning 56.63 points on the day.

Finishing in third place is last year’s novice champion, 13-year-old Karen Chen. The pliable admitted perfectionist went for the most difficult combination of the day—a triple Lutz-triple loop, but was unable to fully rotate the second jump.

“I felt like I did my best,” she said. “I didn’t fall or make any major mistakes, but I still felt that on two of my jumps I was kind of to the left, didn’t land them properly, and didn’t get credit for them.”

Chen used her trademark spins—two level fours and one level three, to keep her in the hunt for the title. The Fremont, Calif., resident scored 54.34 points for her House of Flying Daggers program.

“I feel like I’ve improved some from last season,” Chen said. “I’m getting close on my triple-triple, but I think that junior is a lot tougher than I thought it would be.”

Barbie Long, fourth a year ago, skated early in the competition, and fell on her triple flip attempt, keeping her in that familiar fourth place position.

“I thought that I was a little too nervous and could have relaxed a little more instead of focusing on every little detail,” she said. “I think in the long program, I will try to clear my head and try to focus on some key points instead of all of the little things. I’ll try to relax and just enjoy the moment.”

Maria Yang, 15, finished in fifth place with 48.75 points, while Katia Shpilband, the 16-year-old daughter of Igor Shpilband finished in sixth with 46.04 points.