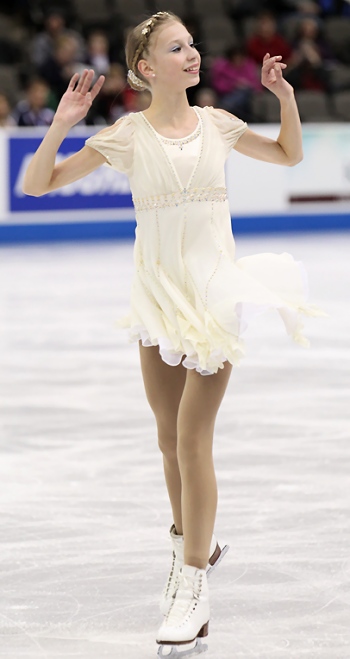 Polina Edmunds performs her Long Program at the 2013 US National Figure Skating Championships.

It’s been a long time coming, but Polina Edmunds finally experienced her breakthrough performance at the 2013 US National Figure Skating Championships.

The San Jose, Calif., missed an opportunity to capture her first national medal last in her hometown last year after a poor free skate that knocked her off the podium. In the year since, Edmunds has committed herself to better training habits, and the result was her coronation as the 2013 U.S. junior ladies champion.

“I’m really excited that I am a national champion—it’s my first national medal, and for that to be gold is amazing,” said the flaxen-haired champion.

The gutsy 14-year-old attempted some of the most difficult technical content in competition history—throwing back-to-back triple-triple combinations near the beginning of her program. The first, a Lutz-toe in which the back half was controversially called as under rotated, set the stage for her mature performance to Romeo and Juliet. The second—a flip-toe was a bit more suspect, and received a downgrade.

“I was kind of disappointed with my score because of all of the difficulty in my program,” she admitted, “but I’m really happy with my skate. There’s not much more that I can do. I know that I did really well for myself, and that’s all I can ask.”

Edmunds skated first of the medal contenders, and scored 159.87 points—by far her personal best, but not a clear-cut winning score. The gold medalist had to wait until the final skater of the competition received her scores to confirm that she had earned the title.

“I was really happy with my performance because it was a good skate and it was at nationals,” the gold medalist said with relief. “I thought I did really well, and I’m really proud of myself for really hanging in there and doing everything that I had planned.”

Holding her position after the short program, 16-year-old Mariah Bell skated perhaps the best two minutes of her life. Unfortunately, the silver medalist had another ninety seconds to go, and made some costly errors that cost the Westminster, Colo., skater the title. Throughout it all, however, the silver medalist showed poise, grace, and a comfortable smile.

“Last year I was quite nervous because it was my first year as a junior,” she explained. “I had to learn that even though I love this sport, it’s not something that I should get totally crazy over. It’s an understanding that the whole reason that I am doing this is to have fun, and not to worry so much about it. It’s boosted my confidence this year, and my everyday training is much more positive.”

Bell skated a charming program to West Side Story—a popular music choice for the evening, and nailed three gorgeous triple jumps early in the program. Later, the 2011 novice bronze medalist popped an intended triple flip into a single and fell on an under rotated triple Lutz attempt. She ended up with 152.80 points in the competition.

“It felt good. I’m just so disappointed in myself for popping that flip and falling on the Lutz,” Bell explained. “I feel like that is something that is going to haunt me, but it gives me something to work on for next year.”

“I was really in the moment, and the first section felt really good,” she continued, “and then in a split second, I let my mind veer off, and popped the flip. I knew that I had to get it back together, and I thought I had the Lutz, but I guess it’s just something to work from.”

Barbie Long, 16, moved up from a disappointing fourth place finish in the short program to capture the bronze medal with a strong performance, also to music from West Side Story. The St. Louis native missed winning the free skate by just .22 points, and finished .27 points behind the silver medalist.

“I think that I could have more confidence at the beginning of my program,” she said. “I should have known that I could do it, but I didn’t believe in myself enough. I have trouble with confidence sometimes because I want to be perfect all the time, and when I mess something up, I just get frustrated.”

Long, who has an uncanny resemblance to former U.S. competitor Amber Corwin, landed five triple jumps—including one in her opening double Axel-triple toe loop combination. She earned the highest technical marks of the night, propelling her to a competition total of 152.53 points.

“I think that I had a very good comeback, and skated close to my best,” she said. “I’m so excited for everything that will come in the future.”

Karen Chen, last year’s novice champion was hammered with under-rotation and downgraded calls in her Fantasy for Violin and Orchestra program, and did not receive full credit for a single triple jump. Her total of 144.56 points was still good enough for the pewter medal.

Amber Glenn, 13, the youngest skater in the competition, finished in fifth place with an athletic program to music from Slumdog Millionaire. The Plano, Texas, native showcased a ‘Rippon’ triple Lutz at the beginning of her program, and finished with 131.70 points.

Madison Vinci, 16, moved up from 11th after the short to finish in sixth overall with 131.64 points.