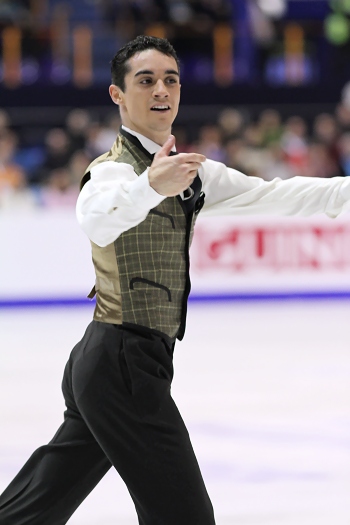 Javier Fernandez of Spain made history again by winning the European title at the 2013 ISU European Figure Skating Championships in Zagreb, Croatia, on Saturday. He is the first skater from Spain to win a medal at an ISU Championship and it was gold right away.

Florent Amodio of France bagged the silver and now has a complete set of medals from Europeans with gold from his debut in 2011 and bronze from 2012. Czech Michal Brezina earned the bronze.

It was a spectacular night of skating at the  Dom Sportova arena, with the six men in the final warm up group hitting 10 quads between them.

Maxim Kovtun of Russia was up to skate first and he set the tone with his performance to Casablanca that included a quad toe, a quad toe-triple toe, two triple Axels and three more triples. However, the 17-year-old did an extra fourth combination that didn’t get credit. He was ranked fourth in the long program with 152.11 points and moved up from seventh to fifth at 226.57 points.

“The European Championships were always going to be a big challenge,” the ISU Junior Grand Prix Final Champion said. “It is mainly about getting experience for me. The short program was the first step, so that was much harder. Then by the free (skate), it was easier. I knew more what to expect.”

“After the quad, it was easier emotionally, but not physically,” Kovtun said of the free skate. “At the end of the steps I felt really terrible. It was so hot out there.”

It was a surprise for him that the triple Salchow-double toe combination didn’t count.

“I thought it was fine,” he said. “I only just found out now that there was a problem.”

France’s Brian Joubert was up next.

The Frenchman opened his routine to Gladiator with a beautiful quad toe and went on to produce five good triples including an Axel, but he singled the second Axel and touched down with his hand on a triple Lutz. He collected 148.54 points for his effort, but it was not enough to stay on the podium, and he dropped one spot to fourth at 232.47 points.

“I skated well today,” said the 28-year-old. “Yes, there were mistakes, the Axel and Lutz and I see I lost a level on the spin, but I was feeling good and the audience was behind me. So that leaves me happy.”

“My preparations for this competition were short and yet I skated well here,” said the six-time World medalist. I see my component score was better, so now I know I have to train more and add the quad Salchow and another quad toeloop before Worlds.”

Russia’s Sergei Voronov followed with his romantic Romeo and Juliet, but was unable to continue his consistent performances from earlier into the season. His opening quad toe was solid, but then he tripled the second quad toe, missed a spin, doubled the second Axel, and did one triple toe too many to drop to seventh at 210.18 points.

“I don’t feel very good,” explained the 25-year-old. “After the first fall in the spin, I suddenly got this bad feeling. I felt very uncomfortable and I stepped out after the triple Axel and the flip because I just didn’t feel right. It was so hard. The first quad and the triple Axel were fine of course, but honestly it was pretty difficult to get myself together psychologically after the fall.”

“I performed well, but not great,” the Muscovite summed up. “I guess what happens happens and today didn’t really work out.”

Then it was Fernandez’ turn and he didn’t hold back. Performing to Charlie Chaplin, the Spaniard reeled off a huge quadruple toeloop (that earned him lots of +2 and +3 on the Grades of Execution (GOE) and was worth 12.87 points alone), a quad Salchow-triple toe (he stepped out of the toe), a triple Axel, and another quad Salchow past the halfway-point.

He then landed four more triples and showed two level-four spins, only doubling a flip. The crowd was ecstatic and Fernandez scored 186.07 points. It wasn’t just a personal best, but also the second-highest score (Patrick Chan still holds the record with 187.96 points from his free skating at Worlds 2011). The 21-year-old totaled 274.87 points (the third highest score behind Chan and Daisuke Takahashi).

“I felt really brave with the three quads,” said Fernandez. “I had an amazing day. My program went well and judges gave high enough marks for me to win. It is fantastic. It wasn’t easy to win against my fellow competitors, because they are amazing. I felt very good today and I am going home happy.”

“After the performance, I was just so happy because I did my job,” he said. “However, two more skaters had to perform their programs. When I stepped on the podium I felt amazing. I was thinking: ‘this cannot be. This is impossible. I am at the European Championships and at the top of the podium!’ All I wanted to do was to get down and hug my parents. They put me into the sport; they made me who I am.”

When Brezina took the ice next, he knew what he was up against. At first it seemed he would crumble under the pressure when he went down on his opening quad Salchow, but then he pulled himself together. The Czech skater hit a triple Axel, a quad Salchow, triple Axel-triple toe, as well as for more triples in his routine to The Untouchables.

He scored 163.68 points and moved up to third to finally win his first medal at Europeans with 243.52 points.

“I’m really happy that after so many years (six) at the European championships and after a couple of fourth places, I’ve finally made it to the podium,” said the 22-year-old.

It was really tough today,” said the 2009 World Junior silver medalist. “I had planned to go for full risk. There was no other chance for me to win a medal. I was able to give my best, despite some mistakes, and I’m very happy with my skating and with the result.”

Brezina did not want to let slip this medal through his fingers again.

“When I fell, the only thing that went through my mind was that I have to skate clean from now on or I’m done. I went jump by jump,” he said.

Amodio skated last and he ended the event on a high note with his program to to Jumpin’ Jack and Broken Sorrow.

The 2011 European Champion nailed two quad Salchows back to back, but then produced a wobbly double Axel instead of a planned triple. Nevertheless, the Frenchman fought back, repeated the Axel as a triple followed by a triple Axel-double toe and two more triples. Strangely enough, he left out one double Axel.

The two-time French champion scored 160.71 points, a season’s best, and settled for silver with 250.53 points.

“I am so happy to have won this medal for France, it was important to me,” he continued. “Javier was better today. I knew he had skated so well, but I didn’t leave anything on the table. It was an extraordinary European Championship, and I am so pleased to have ended it this way.”

“I am very proud of myself and all the other skaters,” Amodio summed up. “The level of competition at the European Championships is crazy, and we should all be proud of ourselves. I feel amazing. I won a medal and I will keep working hard for other projects.”

“I changed my jumps,” the 2011 World Junior bronze medalist revealed. “I didn’t try the quad because I hurt my ligament. It was hurt before, but I hurt it again this morning. It wasn’t a hard fall but, the ligament’s not strong and now it’s really bad. In fact it’s a wonder I could walk.”

Viktor Pfeifer of Austria celebrated a career-best placement, eighth with 194.77 points. His previous best result at Europeans was 17th. The Austrian, who lives and trains in the USA (Wilmington, Del.), didn’t risk a quad toe or the triple Axel, but performed seven triples and only doubled one Lutz.

“Today’s performance wasn’t good, but it wasn’t bad either,” said the 23-year-old. “The quadruple jump (toeloop) is very important to me. I need to work on it more to have it consistently in my program.”

Peter Liebers of Germany finally made it to the top ten five years after debuting at the European Championships here in Zagreb (187.96 points). He decided not to go for the quad, but aimed for a clean program and that was what he put out. The skater from Berlin landed seven triples including two Axels and pulled up from 17th.

“We decided before the warm up not to do the quad,” explained the 24-year-old. “We preferred to play it safe and to put out a clean program to leave a good impression, and I did except for the mistake on the Salchow (he doubled). I did the two triple Axels and the triple-triple in the beginning.”

Tomas Verner of the Czech Republic had another off day. Except for a triple Axel and a triple Lutz, he doubled or singled his jumps and slipped to 11th at 177.41 points.

“I can’t tell you anything that you can publish,” Verner admitted.