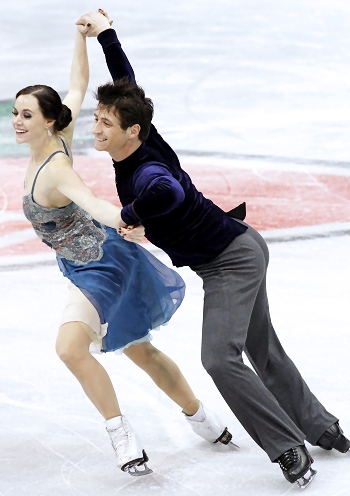 On an all-around fabulous day of skating at the 2013 Canadian Tire National Figure Skating Championships, the ice dancers kicked off the momentum early with nine strong short dance performances for a nearly-packed house in the afternoon.

Earning level 4 on all elements, as well as quite a few 10.00 marks in the components, the Olympic champions looked unstoppable on Saturday afternoon, and they hope that this momentum will carry them through the second half of the season. The short dance has been Virtue and Moir’s weaker point this year, so they have reworked this program quite a bit since the Grand Prix Final, changing the entire opening and closing to the dance.

“It was a great skate for us,” Moir said. “I know I always say that, but I really mean that one. With all the changes, we were pretty nervous going into the skate. It’s almost more nerve-wracking in your own country, where you want to be an example. That skate in particular, to get that under our belts, was a huge boost for our confidence and for that program.”

“We sort of got away from the complex storyline that we set out to do at the beginning of the season,” Virtue said. “We just wanted it a little more playful, more simple, just about the joy of dance and the ups and downs of a relationship. It starts with a hug, ends with a kiss.”

A pair of teams are battling for the silver medal due to the absence of the injured Kaitlyn Weaver and Andrew Poje. With less than two points separating them, Piper Gilles and Paul Poirier (CO) and Alexandra Paul and Mitchell Islam (CO) are on track for an exciting free dance competition.

“It’s been a great weekend so far,” Poirier said. “We’re really excited to come out tomorrow and do a really strong free dance.”

“We have improved a lot since Paris,” Gilles said. “We’ve done a lot of work on the small details, changing the hand holds and really making [the free dance] grow.”

Their short dance to Mary Poppins came towards the end of the final group, and the crowd seemed to really appreciate it.

Paul (21) and Islam (22), skated just as confidently, but had the disadvantage of skating in the earlier warm up group when the audience was not quite as engaged.

“We got fours on our polka, so we were really happy about that,” Paul said. “We’ve been working really hard on the levels.”

“It’s good to be healthy again,” Islam said, “and it’s good to be back competing at the level where we know we can be at. It’s the goal to be second right now and we’ve put ourselves in good position for that.”

The free dance should be a terrific match-up.

Nicole Orford and Thomas Williams (BC/YT) are fourth with 61.52 (33.33/28.19) points, a personal best. They have performed their country program well this year, but this was the first time that they scored anywhere near this high. Excellent technical levels contributed to their score. They earned level 3 on the second Yankee Polka pattern as well as the midline steps, and level 4 on the rest of the elements.

Orford (20) and Williams (21) are still chasing the top skaters in terms of Grades of Executions (GOE) and components, but they have improved quite a bit this year and are one of the fastest teams in the field over the ice.

Kharis Ralph and Asher Hill had hoped to also challenge for medals, but a disastrous mistake on the twizzle sequence cost them six to seven points (52.08). Hill stumbled out of the first twizzle early, putting his hands on the ice to avoid a fall. He did not rotate enough times before the issue for the element to earn any credit, although he did pop right back up and skate the second half of the sequence.

Despite the mistake, the audience really enjoyed their short dance to music from Gigi and the “Can-Can,” especially the back-to-back splits from both partners at the end of the program.