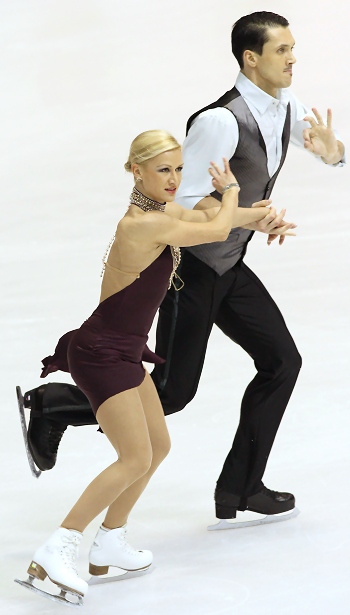 Germany’s World Champions Aljona Savchenko and Robin Szolkowy trail the Russians by 3.02 points, while Stefania Berton and Ondrej Hotarek of Italy are in third and close to a historic first medal for for their country.

The past days have been very tough for Volosozhar and Trankov. Trankov lost his father who suffered a sudden heart attack on Sunday, the day before the couple left for Zagreb. The team still decided to compete but did not give any interviews.

In spite of the tough situation, the Russians turned in a strong performance of their jazzy Godfather program, hitting a big triple twist, side by side triple Salchows, a throw triple loop, and level-four footwork, spin and lift. Only the backward outside death spiral was short and garnered a level one. The defending champions earned 73.23 (37.60/35.63) points.

“Overall I am pleased. It was a good skate,” said coach Nina Mozer. “We want a clean skate in the free program as well. They were very well prepared for the championships, but of course after the death of Maxim’s father (on Sunday) they are not quite in the right state of mind. [Maxim] is coping, he is a man and he is very strong.”

For Savchenko and Szolkowy, it was their first major competition since Skate Canada in October. Savchenko had come down with a sinus infection in Windsor, and as a result, the team missed their second Grand Prix (Trophée Bompard), and subsequently the Grand Prix Final. They only competed at NRW Trophy in December. Nevertheless, the Germans didn’t look rusty.

Performing to Kismet, they completed a high throw triple flip, a solid triple toeloop, a triple twist, and collected a level four for the lift, death spiral, and side by side spin, although it was a little wobbly. On the other hand, they got only a level two for the step sequence.

“We are kind of satisfied,” Szolkowy commented. “We did a mistake in our spin that never happens actually, but it did happen. Because of our late arrival, we didn’t have the chance to train here in the main rink. It is a different feeling if you know the rink before. You feel more comfortable and you have a better orientation.”

The 2010 Olympic bronze medalist were one of many other teams that were affected by the delays and cancellations due to bad weather in Europe last weekend, and therefore arrived one day later than was planned.

Savchenko said that she battled her illness until the end of December, but is now recovered. The skaters didn’t feel that missing the second Grand Prix and the Grand Prix Final affected them in any way.

Berton and Hotarek skated last and had a very good outing as well with a triple toe, triple twist, throw triple loop. Their program to Paint It Black by the Rolling Stones included three level-four elements as well, and the Italians achieved a new season’s best with 64.28 (34.77/29.51) points.

“We are ecstatic about our performance. It was the first time for us to come to competition completely ready,” said a smiling Hotarek. “We’ve had a great season so far because we were healthy.”

“We got the small medal (for the short program) for the first time and hopefully we’ll skate as good in the long program,” Berton commented. “Back in 2008 we both competed here in Zagreb. Ondrej was skating with his former partner and I skated singles. Since we didn’t skate so well, we needed our revenge.”

Vanessa James and Morgan Cipres of France struggled with their triple twist when he caught her too late and she stumbled, but the French team recovered to nail a triple toe and a throw triple flip. They earned 59.27 (31.06/28/21) points, a new season’s best, for their performance to Rhumba d’Amour and upbeat music by Safri Duo.

“We’re really happy with the skate,” said James. “When we started we were a little bit nervous, and so the twist was almost too high, but we continued to skate well after that mistake, so we’re really pleased. It’s good to start out that strong at Europeans.”

The team showed a lot of improvement over the past year.

“Before, we let things pass and if something wasn’t working so well, we’d move onto the next thing. Now, our coach doesn’t let anything go. We’ve changed our whole way of thinking.”

Russia’s Yuko Kavaguti and Alexander Smirnov had a poor short program. The triple twist was okay, but Smirnov went down on the triple toe, while Kavaguti stepped out of the throw triple loop and stumbled at the exit of the death spiral. At 56.20 points, the multiple European and World medalists placed a disappointing sixth.

“We trained very hard for this. Our free is a very strong, good program. We will hope for better then,” Smirnov said.

“Their skate was disastrous,” she said. “They were very, very well prepared for this competition. Now we will be looking for some kind of redemption in the free program.”

Mari Vartmann and Aaron van Cleave of Germany gave a clean performance of their Blues program to The Messiah Will Come Again. They produced a double twist, triple toe, and throw triple Salchow to earn 55.14 points.

“We are very happy with our performance,” said Vartmann. “We went into it with a positive mindset, but we did not expect to skate almost clean. There were just a few little mistakes.”

“We felt a lot of stress as we didn’t have much competition practice (due to injuries),” she added. “Usually, we would have done four competitions by now. It is hard to repeat the fifth place finish (from 2012 Europeans) after the long injury break. Physically we are fit but not so much mentally.”

Daria Popova and Bruno Massot from France are currently ranked seventh at 53.75 points. She stumbled on the throw triple loop.

Defending European bronze medalists Ksenia Stolbova and Fedor Klimov of Russia had a subpar performance with a shaky triple twist, Stolbova’s step out on the throw triple flip, and Klimov’s fall on the triple toe. They are currently in eighth with 53.70 points.

“It was bad. I fell and we did several mistakes. We could skate better,” Klimov admitted.

The team from St. Petersburg was a late replacement for Vera Bazarova and Yuri Larionov, who withdrew due to Larionov suffering an injury to his right hand.

“We did prepare, but we didn’t know that we were coming here until Friday, so maybe we were not so prepared mentally,” Klimov offered. “I hope the free program will be better.”

Stacey Kemp and David King of Great Britain finished in 10th place. She stumbled on an underrotated double Axel and their triple twist was messy, but they landed a throw triple flip (45.39 points).