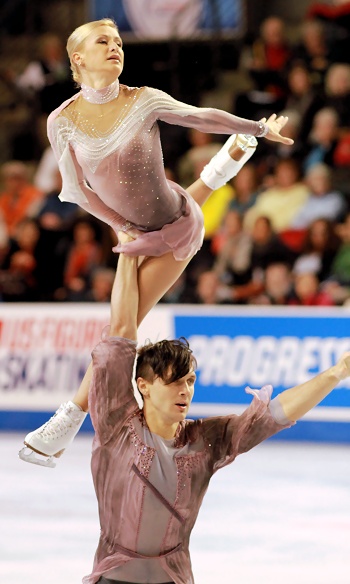 Four-time World Champions Aljona Savchenko and Robin Szolkowy of Germany settled for the silver medal, while Stefania Berton and Ondrej Hotarek of Italy celebrated a historic first Pair skating medal for their country with the bronze.

Volosozhar and Trankov turned in a solid performance of their dramatic routine to Violin Muse by Ikuko Kawai. The team from Moscow completed their trademark huge triple twist, a side by side triple Salchow (his landing was a bit low), a triple toe-double toe and difficult lifts. The Russians earned a level four for the lifts, the spins and the death spiral to score a seasons best of 139.22 points (67.39/71.83).

Overall, the national champions racked up 212.45 points and defended their title, beating Savchenko and Szolkowy for the first time in competition.

“I didn’t feel so good in the free program, it was so hard and we had a big problem. Now I’m a little better,” Volosozhar said, referring to the tragedy that struck Sunday when Trankov’s father suddenly died of a heart attack at age 62. “It is difficult to raise the mood at this time, but I am glad we made the decision to compete here.”

“Of course, we are not entirely happy with the performance, there were some mistakes,” she added, “but overall, this is a good start for Russia at these Championships, the first gold medal, and we hope our teammates will also do well.”

“We will work towards the World Championships and hope to skate better there,” Trankov commented.

“They are tired more than anything,” said coach Nina Mozer. “They feel tiredness much more than happiness right now.”

Savchenko and Szolkowy had drawn to skate last and ended the high-level event with another strong performance. Skating to Flamenco Bolero, the Germans pulled off a throw triple twist, a triple toe-triple toe sequence, and a triple twist, as well as five level-four elements. However, Savchenko went down on the triple Salchow while Szolkowy doubled his, and their pair combination spin merited only a level two.

The program continued to build to the end, and the throw triple Salchow in the last second was spectacular. The four-time World Champions earned 135.03 (65.90/70.13) points, which was a new season’s best. Their total score was 205.24 points.

“We fought through it,” said Szolkowy said. “I think the first half was strong, powerful, but then in the second half, we ran out of steam a little. We went for everything.”

“I should have done a triple Salchow, of course, then we really would have gone for everything,” he continued. “We know what we need to do. We didn’t try anything new, but we need to make sure that we get all the transitions in and that we can rise as the music is rising and getting faster.”

“All in all, in all, we are happy with our program tonight,” Szolkowy summed up. “Yes, there were one or two mistakes, but the most important thing was that we gave a good performance and came back for this season. I think we did that.”

Berton and Hotarek had also chosen a Flamenco theme with Poeta by Vincente Amigo. The Italians opened with a solid triple toe-double toe-double toe combination, but then Berton crashed on the side by side triple Salchow. The team recovered to produce a triple twist, a throw triple loop and difficult lifts. They almost slipped setting up for the throw triple Salchow, but still did it although Berton double-footed it.

“Today was one of the most difficult days for us,” said Hotarek. “The pressure of coming from a third place in the Short Program was slowly getting to us, but somehow it worked out. We couldn’t be happier with the result and winning the first medal in Italian Pairs history.”

“Ondrej helped me a lot today to deal with pressure,” added Berton, “and the audience here in Zagreb was with us from the very first moment.”

The team has shown tremendous improvement since last season. The only glitch came when James stumbled on the triple toe, failing to complete the combination.

“We’re very satisfied with our performance,” said James. “There was a lot of stress because we had a good short program and we wanted to keep our place, and we fought for that from beginning to end. I’m glad if people have noticed how our partnership has strengthened.”

“We put a new and difficult lift in, a back lasso, and this was the first competition we did it and it worked,” Cipres announced. “We have worked really hard this season and now we’ll have a little break.”

Yuko Kavaguti and Alexander Smirnov of Russia remained in fifth place at 178.81 (57.70/62.58) points. They landed the triple toe-triple toe sequence and triple twist, however, Smirnov singled the Axel and fell on top of it while Kavaguti wobbled on both the throw triple Salchow and loop.

“Of course we didn’t succeed in everything we did but we are happy,” offered Smirnov. “It was not excellent but it was good. There are a few things I am not pleased with, but it is better not to talk about them. I feel stronger in the free program – it is calmer and there is not the same pressure on the three jumps (as in the short program).”

Kavaguti said that she didn’t even see how her partner fell. “The female partner should be looking up and smiling at these times and that is what I did.”

Ksenia Stolbova and Fedor Klimov of Russia couldn’t repeat last year’s success and came in sixth at 167.23 points. They started well into their fun Addams Family program with a triple twist, a triple toe-double toe-double toe combination, and a level-four Axel Lasso, but Stolbova later fell on the throw triple Lutz while Klimov missed the double Axel.

“It was much better than the short program – well, it couldn’t have been worse,” Klimov commented. “Now I’m very tired. We had a great first half, but I think for the second half we didn’t have enough energy.”

“We like this kind of program with lots of character,” he said, when asked about their music. “It’s funny and we make jokes in the program.”

Daria Popova and Bruno Massot of France placed seventh (157.12 points). Their routine to music by Apocalyptica featured a high triple twist, a triple toe-single loop-double toe sequence, and a double Axel. However, the lifts could have been better and Popova stepped out of the throw triple Salchow.

“This was a strange performance for me,” Popova told the press. “I wasn’t as nervous as I usually am. I kept talking to myself before every element and somehow I wasn’t as nervous. I think we did a great job. I am especially happy that I landed double Axel in competition after a long time.”

“I am proud of Daria,” he said. “Both throws and side by side jumps were very solid and we have every reason to be happy. It is great to achieve a season’s best at a big competition.”

Mari Vartmann and Aaron van Cleave from Germany made several errors and slipped from sixth to eighth at 141.79 points.

“I don’t know what to say,” Vartmann later said. “During the warm up I felt secure and comfortable. I don’t know what went wrong. I noticed his mistake on the (side by side triple) Salchow and it threw me off (she doubled).”

“Overall, this was a solid performance for us,” said Guarise. “We are satisfied. Parts of the program were as good as we do in practice, especially the combination (triple Salchow -double toeloop), as well as the lifts, but others were not nearly as good. Our goal is to improve from competition to competition.”

“It was good. We got everything out we wanted to get out,” King said.